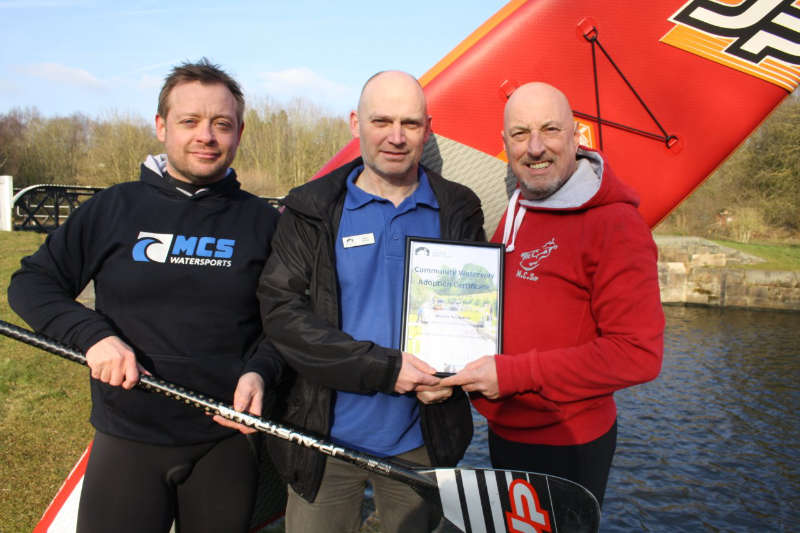 The Canal & River Trust charity has signed up its first ever paddle boarding club in a formal adoption agreement – to look after a stretch of the River Weaver Navigation in Cheshire.

Mid Cheshire SUP (Stand Up Paddle) boarders, who are based in Winsford, have formally adopted 1.8 miles of the river from Winsford Marina to Newbridge. The club, which has more than 20 members, regularly paddles along the river but will now also clean and clear litter from the river banks, as well carrying out wildlife surveys.

The Canal & River Trust cares for 2,000 miles of Britain’s waterways but sometimes struggles to collect rubbish from inaccessible places like reed beds. Paddle boarders are in an ideal position to reach shallow sections close to the river bank which act as traps for plastic bottles, cans and other rubbish.

Jason Watts, a volunteer coordinator with the Canal & River Trust, said: “This is a win-win arrangement for everyone. We are delighted Mid Cheshire paddle boarders are leading the UK as the first club in this fast-growing sport to take responsibility for their home river.

“Other stand up paddle boarding groups have joined in litter picks before but this is the first time a club has entered into a formal adoption agreement. Disposing of plastic waste is high on the political agenda at the moment. Of course, it would be better if people didn’t drop litter at all but if we can all stop it reaching the oceans that is a great result for everyone.”

Mid Cheshire SUP boarders were formed four years ago by Winsford enthusiast Brian Cadwallader, who is now the group’s chairman. Over the years dozens of people have tried out taster sessions run by qualified instructors and got hooked on the sport too. And when he mentioned on the group’s Facebook page about getting involved in cleaning up the River Weaver, he was overwhelmed with the positive response.

Brian said: “Plastic is a big issue. As we paddle along, we can’t fail to notice all the rubbish trapped in reeds and booms above weirs. We want to do our bit to make this beautiful river a great place to visit. It’s a hidden oasis and could play a much greater role in attracting tourists to the area.

“Our members are keen to play their part in keeping the river litter free and add to the great work of the Canal & River Trust staff. We all need to take action now to stop plastic polluting our rivers and oceans. As users of the river, we take pride in our local waterway and believe we have a moral obligation to help.

Richard Jordan the club’s secretary, added: “If we can keep the river in pristine condition and stop plastic and other rubbish reaching the River Mersey and the Irish Sea that will be a great result for us.”

Their first major plastic litter pick will be on Sunday 22 April – International Earth Day – when they are hoping community groups and individuals all along the River Weaver will join their 3Ps Paddlers Pick-up Plastic project.

For more information about this initiative and taster sessions with the Mid Cheshire SUP, check out the group’s Facebook page.

The Canal & River Trust currently works with more than 170 adoption groups nationwide involving a wide range of organisations, from schools and businesses to running clubs and Scout groups. The Trust has set a target of getting a quarter of its canal network (500 miles) adopted by community groups by 2025.

A map of available locations, usually about one mile in length, is available on the Trust’s website www.canalrivertrust.org.uk. Check it out for more information about adopting, donating or volunteering or call the customer services team on 0303 040 4040.