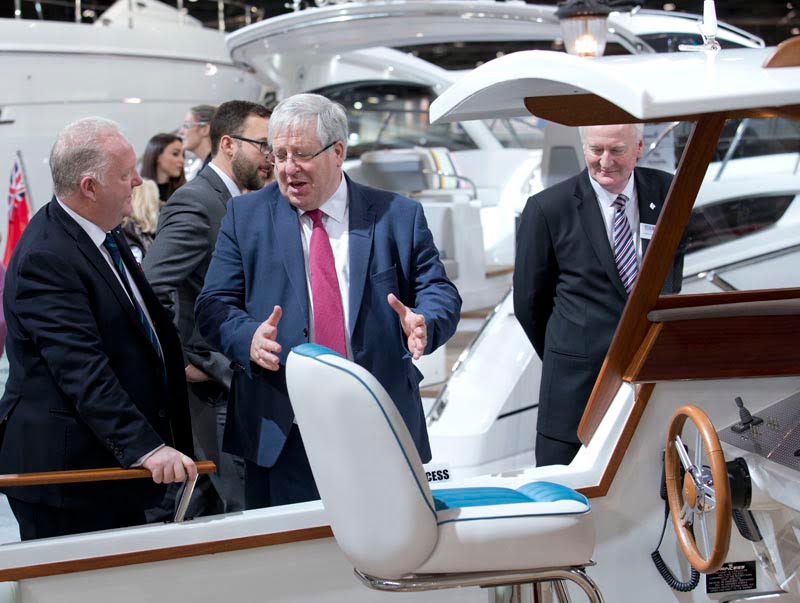 During the recent 62nd London Boat Show, the positivity in the industry was put under the spotlight with hundreds of important meetings taking place. From five of the UK Government’s senior ministers visiting, to 48 suppliers meeting with international buyers, British Marine conducted some serious marine business during the 10-day event and promoted its members and the industry to a global audience.

Strong sales were reported throughout the duration of the Show, with many companies reporting an increase on last year’s figures including numerous multi-million pound deals. There were close to 400 boats showcased with several new member brands such as Adidas Sailing and Bainbridge International exhibiting at the Show for the very first time.

British Marine started the week by releasing new figures on the Monday that demonstrate the UK marine industry is continuing to grow for a fourth consecutive year.

The UK leisure, superyacht and small commercial marine industry continues to grow, according to new statistics published by British Marine at the London Boat Show 2016. The statistics show that industry revenue stands at £2.97bn for 2014/15, up 1.1% from 2013/14 with the domestic market continuing to grow, expanding from 68% of total revenue (2013/14) to 70% (2014/15). Particularly strong performances in the consumer sector emerged, led by boating tourism, brokerage and insurance and financial services reinforcing the UK’s position as a global hub for marine consumer and business services.

Five senior ministers visited the Show, all of whom sit on the cross-ministerial working group for maritime growth. These were The Secretary of State for Transport, Rt Hon Patrick McLoughlin MP, The Secretary of State’s Shipping Minister, Robert Goodwill MP, Business Minister, Rt Hon Anna Soubry MP, the Minister for Trade, Rt Hon Lord Maude of Horsham, Environment Minister, George Eustice MP and the Prime Minister’s Apprenticeship Adviser, Nadhim Zahawi MP. They met with a wide range of member companies who exhibited at the Show, learning first-hand about the industry, its successes and how Government policy affects and supports it. Every one of the ministers left the Show with a much better understanding of the industry and acknowledged that there are great opportunities for growth, provided the industry gets the right support.

Organised by British Marine, in association with IBI and UK Trade & Investment (UKTI), Meet the Buyer took place over the Tuesday and Wednesday of the Show. The annual event offered UK suppliers the unique opportunity to promote their products and services to buyers from across the globe. Seventeen buyers, including purchasing managers from overseas boatbuilders and distributors, were flown into the Show. These representatives, from countries such as Italy, Taiwan and Russia, met with 48 UK suppliers of equipment and services. Over 426 twenty-minute meetings took place with the suppliers and it is estimated that over time these meetings will generate business wins of over £1.2million between the UK companies who took part.

The annual British Marine Directors Lunch, which took place on the Tuesday, was once again well attended by senior stakeholders from across industry and Government. The same day marked the inaugural Apprenticeship Tuesday, showcasing the diversity and growth of the marine industry as a career pathway for future generations and welcomed marine apprentices and students from all areas of the industry. In roles varying from marine engineers to riggers and carpenters, Apprenticeship Tuesday recognised the wealth of accessible skills and careers in the sector.

Dee Caffari, the British yachtswoman and first woman to have sailed single-handed and non-stop around the world in both directions, spoke at the annual Women in the Marine Industry drinks reception on Wednesday at the Show. Having been awarded an MBE in 2006 in recognition of her achievement, Dee truly inspired the all-female audience with fascinating tales of her outstanding successes.

British Marine promoted the breadth of jobs in the industry during Careers Wednesday. A number of employment and recruitment companies in British Marine membership came to the Show to talk to jobseekers regarding possible career opportunities in the marine industry.

On Thursday, the London Boat Show welcomed Sir Alan Massey KCB, CBE, Chief Executive of the Maritime and Coastguard Agency (MCA), who gave a very well received and comprehensive presentation to the delegates at the Superyacht UK Technical Seminar.

British Marine’s activities at the Show ended on a high with Superyacht UK, an association of British Marine, celebrating the winner of its Young Designer competition. Dastinas Steponenas scooped the prestigious accolade having gone up against 10 other students from universities across the UK. The students had 36 hours to create their entries from scratch, live at the Show. The annual event is designed to raise the profile of the essential hand-drawing skill and to increase awareness of the marine industry as a potential career option. Dastinas will be taking up the prize of a coveted placement at Pendennis Shipyard in Falmouth later this year.

Quote for the industry statistics:

Howard Pridding, Chief Executive of British Marine, said: “We are pleased to report that the UK marine industry continues to show growth, yet again demonstrating its value to the UK economy. Whilst some in the industry are feeling the effects of difficult trading conditions across the Eurozone and some of the BRIC countries, we are seeing strong demand across the world for UK expertise in consumer services, which is testament to the industry’s heritage in these areas. UK consumer spending in leisure activities and tourism also continue to rise, buoyed by low inflation and rising wages, and our industry and particularly our members, are seeing the benefits. We look forward to lots of business being done in 2016, beginning at the London Boat Show, and further growth across the industry in the year ahead.”

Quotes from ministers who attended the London Boat Show:

The Secretary of State for Transport, Rt Hon Patrick McLoughlin MP, said: “The UK’s marine industry is a major success story and the London Boat Show displays the impressive skills and world-class products provided by the sector. Britain’s highly advanced, leading maritime industries are creating jobs and keeping the UK ahead of the worldwide competition. We are determined to play our part by supporting the UK’s continued growth as a leading international maritime nation, from leisure boats to the biggest container ships afloat today.”

Business Minister, Rt Hon Anna Soubry MP, said: “The UK maritime sector adds over £11billion to the UK economy, supporting over 100,000 jobs, so it was a real pleasure to visit the London Boat Show and meet [British Marine] members, to see first-hand a UK success story. We have a world-class reputation for building high quality boats, from warships to yachts, and I want this important industry to continue to contribute to a growing economy.”

Minister for Trade, Rt Hon Lord Maude of Horsham, said: “I was impressed with what I saw today at the London Boat Show. Marine is an important industry for the UK, making a valued contribution to the economy and boosting exports. UK marine expertise is in demand across the world, particularly in areas such as brokerage and manufacturing, and Government is committed to creating the conditions for growth and effective support for exporters, so that it continues to flourish.”

Environment Minister, George Eustice MP, said: “As a seafaring nation, it is vital we protect our coast and waters for generations to come. It was a pleasure to visit the London Boat Show and meet leaders in the leisure marine sector who are continuing to focus on environmental conservation, while driving the growth of this important industry that makes a significant contribution to the UK’s economy.”

The Prime Minister’s Apprenticeship Adviser, Nadhim Zahawi MP (Stratford-on-Avon), said: “It was a pleasure to visit the London Boat Show and meet with some of the talented apprentices who represent the future of our outstanding UK marine industry. I was very impressed by the growth of apprenticeships in the industry and initiatives, like the Shipwrights Fund, which helps UK marine businesses take on their first apprentice. The Government has set a clear target of delivering three million new apprenticeships by the end of this Parliament and I look forward to engaging more with British Marine and its members, to help develop and promote the excellent opportunities that the marine industry has to offer.”

Matt Faulks, Senior Sales Manager at Savage Lighting, said: “I found this to be a fantastic and very worthwhile event for myself and my company. It gave me the perfect opportunity to introduce our specialist lighting products to key purchasing and technical contacts that work within the superyacht, commercial and leisure marine industry on a global basis.”

Tom Reed, Scanstrut, said: “The two days ran perfectly and the range and quality of buyers was great this year. We expect to close at least three new customers from it, so for Scanstrut it was a great value event.”

Antonio Martone, Purchasing Manager at Intermarine, said: “Meet the Buyer was a very interesting and well-organised experience where I had the opportunity to meet different types of British suppliers and I could also find some that could potentially co-operate with our shipyard.”

Dastinas Steponenas, winner of the 2016 Superyacht UK Young Designer competition, said: “It’s an absolute honour to win this prestigious Award. I have had a passion for fine art since a very young age and I am really excited about completing my four-week internship at Pendennis Shipyard in Falmouth.”

Mike Carr, Chairman of Superyacht UK and Joint MD of Pendennis, said: “Pendennis is delighted to once again support the Superyacht UK Young Designer annual Award. We have been impressed by the extremely high level of skill and imagination shown by the competitors. When Pendennis was founded 27 years ago, the industry was dominated by hand drawn designs and production schematics. It is refreshing to be part of a competition that embraces traditional creativity – skills that are just as important to our industry as using modern technology. We are very much looking forward to welcoming Dastinas to Pendennis for his internship later this year.”

Richard Selby, International Development Manager for British Marine and Superyacht UK, said: “On behalf of Superyacht UK and our judges, may I pass on our congratulations to Dastinas. His award is a true reflection of the hard work that he has put into his studies and we’re thrilled to be able to offer him the opportunity to be recognised by the industry and gain invaluable work experience and contacts. There is such incredible design talent in Britain and it was a real privilege to be a part of this fantastic competition.”