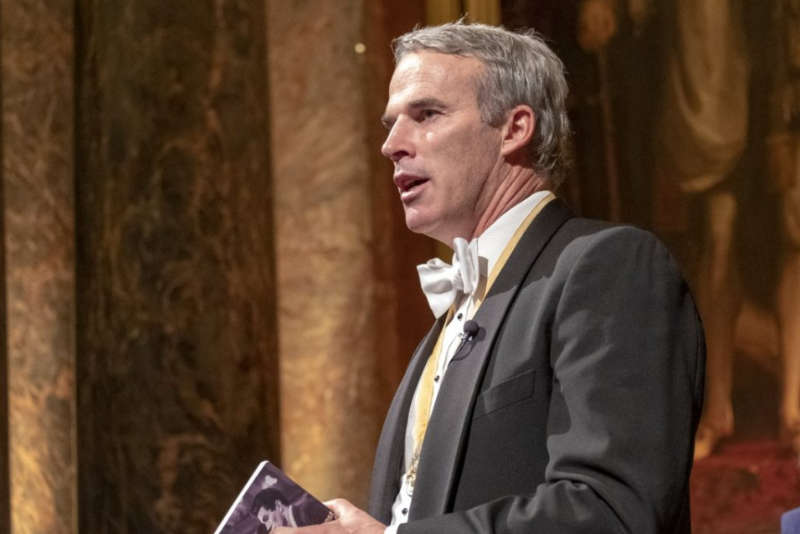 The 23rd annual Maritime Media Awards were held at Drapers’ Hall in the City of London on 31st October 2018. Top names in the maritime industry were honoured by the First Sea Lord and Chief of Naval Staff, Admiral Sir Philip Jones KCB ADC, for their contribution to maritime affairs across media, film and literature.

The event saw the best in maritime journalism come together with over 220 guests from the maritime sector and media industry gathering to hear broadcaster and naturalist Sir David Attenborough receive the prestigious Maritime Fellowship Award for raising public awareness of how life on earth depends on the oceans. Sir David was unable to attend and his Fellowship was received on his behalf by Dame Jane Francis of the British Antarctic Survey and Linton Roberts of Cammell Laird.

Chairman of the Maritime Foundation, Julian Parker OBE welcomed the guests and after the première of the keynote film Polar Pioneer – RRS Sir David Attenborough, he introduced guest speaker, Lewis Pugh, UN Patron of the Oceans, who gave a thought-provoking assessment of the devastation caused by plastics, illegal fishing and pollution:

“I was absolutely delighted when two months ago the United Kingdom announced that they would now be leading the world in protecting our oceans, with 50% of the oceans to be protected by 2030. This is an enormous breakthrough, and if other nations join, this will be one of the most important moments in the history of conservation.”

The First Sea Lord’s Award for Best Use of Digital Media was won by The Mary Rose Trust. The prize, a mounted ship’s bell was received by CEO Helen Bonsor-Wilton, Guy Barnett and Simon Clabby, Certificate of Merits were awarded to Tony Long of Global Fishing Watch and Jack Lowe of The Lifeboat Station Project.

Testimony Films won the Donald Gosling Award for Best Television or Film Production for their BBC Four documentary Hull’s Headscarf Heroes – an outstanding film focussing on the 1960’s campaign by fishermen’s wives in Hull to improve standards of safety in the industry. Blast! Films was awarded two certificates of merit for their documentary series’ Saving Lives at Sea for BBC Two and The Channel – The World’s Busiest Waterway for Channel 4.

The Mountbatten Award for Best Book was awarded to David Mearns for The Shipwreck Hunter – A lifetime of extraordinary deep-sea discoveries. The unrivalled and extraordinary revelations on locating wrecks provides a captivating reading. Certificates of Merit were awarded to David Davies for Kings of the Sea: Charles II, James II and The Royal Navy; Barry Gough for Churchill and Fisher: Titans at the Admiralty; Eric Thompson for On Her Majesty’s Nuclear Service and Naomi Austin for the best illustrated book, The Call of the Sea: A visual timeline of Sunderland’s shipbuilding history.

The Desmond Wettern Award for Best Journalism was given to Christopher Cope for consistently raising public and parliamentary awareness of the importance of the Royal Navy and Britain’s defence industries. As Warship World’s Political correspondent, he has provided readers with comprehensive, informative and enthralling journalism of the highest calibre. On receiving the award, he said,

“In June 1992, I wrote my first parliamentary report for the magazine which, 142 issues later, continues to this day. I know that Desmond would have been fully supportive of the disclosures made in my parliamentary reports as they have chronicled the massive rundown of the Navy over the last 26 years. Indeed, today, the frontline strength of the Navy is 60% smaller than it was in 1992.”

The First Sea Lord rounded up proceedings with the presentation of a Bottle of Port to Christophe Cope, and left the audience in no doubt that the Royal Navy is playing a valuable international role across the oceans.

Julian Parker OBE, Chairman of the Maritime Foundation commenting on the Awards, said:

”This has been a very special evening and a real celebration of the way the maritime media has demonstrated its unique capability to bring the remoteness of the oceans right into our living rooms”.