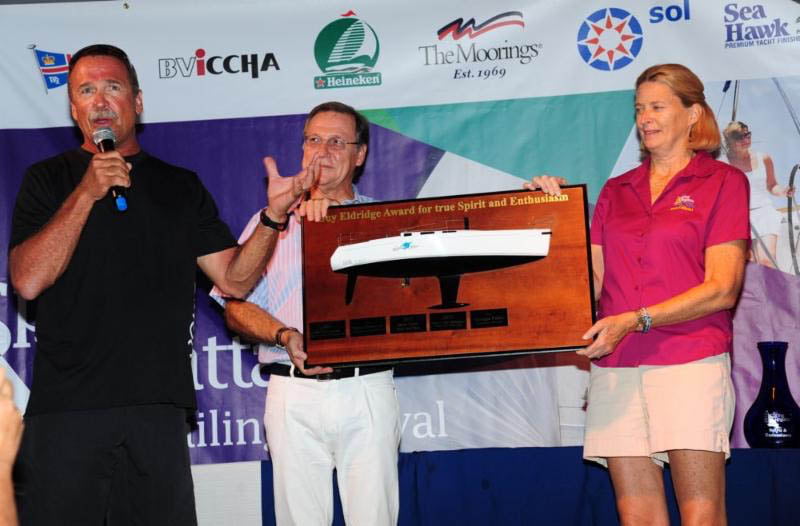 Peter Holmberg, the Caribbean’s most famous sailor is living proof that ordinary people are capable of extraordinary things, and at this year’s BVI Spring Regatta & Sailing Festival he was awarded for his services to the sailing world.

“Every year we present The Guy Eldridge Spirt of Enthusiasm Award to someone who shines in the spirt of the sport and who we feel has stepped out and gone beyond,” remarked the Commodore of the Royal BVI Yacht Club, Chris Haycraft.

“This year we are giving it to a guy who has done so much for Caribbean sailing and especially during his roll as President of the Caribbean Sailing Association over the last couple of years – Peter Holmberg,” continued Haycraft. “He has reorganised Caribbean regattas, he has gone out there and got boats to come to regattas, he is a spokesman for Caribbean sailing. He and his team has promoted Caribbean racing to the world, while at the same time improved events and reached down to promote sailing at the grass-roots level on the smaller islands. We are proud to present Peter Holmberg with this award.”

“It’s a real honour to be selected by my good friends here in the BVI,” said Holmberg on accepting the trophy at the Awards Ceremony for the recent BVI Spring Regatta & Sailing Festival where he was strategist on Steve and Heidi Benjamin’s high performance American Carkeek 40, Spookie.

“Thank you very much. I am very proud of the country I’m from and we do have the best sailing in the world. It’s just a matter of getting sailors from around the world to come down here to enjoy it. Thank you BVI Spring Regatta very much,” continued Holmberg who is in his third and final year as President of the CSA; a job which he says has been one of the most rewarding ever as he’s been able to give back to the sport which gave him so much.

Peter Holmberg was born and raised on St. Thomas, Virgin Islands and went on to win the first and only Olympic Medal for the US Virgin Islands in the 1988 Olympics in the Finn Class. He followed this into a professional sailing career that saw him reach World No. 1 ranking in Match Racing and was victorious in the 2007 America’s Cup. He is now based again in the Virgin Islands and continues to sail professionally for various racing programs around the world. Peter is currently racing on Spookie at Les Voiles de St. Barths and his final event of the Caribbean season will be at the Nonsuch Bay RS Elite Challenge during Antigua Sailing Week which runs between 25th April-1 May.