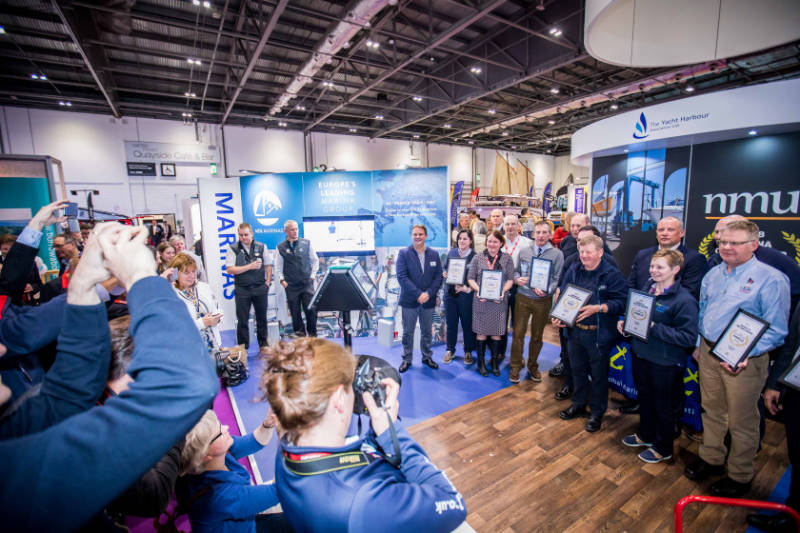 The Yacht Harbour Association (TYHA) announced the winners of their prestigious NMU Marina of the Year Awards on Thursday evening (11 January) at the new five-day London Boat Show 2018. Now in their fifth year, the Awards, sponsored in 2018 by specialist insurer, NMU, are special because they are voted for by berth holders. They recognise the best of over 160 Gold Anchor accredited marinas from across the globe.

The NMU Marina of the Year 2018 winners and runners up were:

International Marina of the Year 2018

Superyacht Marina of the year 2018

Simon Haigh, Chairman of The Yacht Harbour Association, a group association within British Marine, gave his praise to all the marinas involved: “Many congratulations to all the winners and runners up in the NMU Marina of the Year Awards 2018. These awards have built huge momentum since they were introduced and really mean something because it is marina customers who are voting for their marinas, recognising the excellence of facilities provided and the level of service which they receive.

“The winners have been endorsed by their customers in the best possible way, to become Marina of the Year in their respective categories, which must be a hugely motivating and satisfying achievement. I would like to commend everyone involved and pass on our best wishes for the 2018 boating season.”

Commenting on their UK Coastal Marina (over 250 berths) category award, Mike Tait, Group Leisure Manager for Jersey Marinas said: “We are absolutely thrilled to have won this award, especially as it is voted for by our customers. Although we are small in number each and every one of the team takes an enormous pride and pleasure in looking after our marina guests.

“To receive such recognition from the prestigious The Yacht Harbour Association is a true reflection of the dedication, enthusiasm and professionalism consistently demonstrated by the Jersey Marinas Team and we would like to thank everyone who voted for us”.

David Findlay, Marina Manager at Inverness Marina responded to their award for UK Coastal Marina of the Year (under 250 berths): “We were all very surprised and pleased to hear that we had won the award. We would like to thank all our customers that took the time to vote for us and we look forward to providing the same friendly service and welcome to all those who choose to berth their boats at Inverness Marina, and to all the ever increasing numbers of visiting yachts passing through in the summer months.

“This is the icing on the cake on top of our four gold anchors, and with further developments planned we hope to improve our facilities even more to become a five gold anchor marina.”

Robert Parton, Managing Director at Church Minshull Aqueduct Marina, this year’s winner of the inland marina category commented: “We are delighted to have won the Inland Marina of the Year 2018 award. In an increasingly competitive market where customers have plenty of choice of marinas and moorings around the inland network, it is particularly rewarding to win an award that is a result of boat owners’ votes. Our thanks go to all those who voted for Aqueduct Marina, The Yacht Harbour Association for organising the award and to NMU for sponsoring the competition.”

Gavin Deane, General Manager at the Royal Cork Yacht Club, commented upon receiving the award for International Marina of the Year: “We are delighted to receive such a significant award from TYHA, having been runner up in this category last year it spurred us on to improve our standards even further over the last 12 months.

“The receipt of this award is as a result of the hard work of the Executive Committee and Club Staff since the Royal Cork attained the Five Gold Anchor Status in late 2011. This award means so much to everyone at the Club as it is voted for by our berth holders and visiting boats.”

Liyanage Kithsiri, Marina Manager, Jumeirah Beach Hotel Marina, on receiving the Superyacht Marina Award said: “We are delighted to win this prestigious award, which demonstrates our commitment to providing the highest standards of customer service and safety.  We would like to thank all of our loyal marina members for their ongoing support as well as Jumeirah Beach Hotel and Dubai Holding for their commitment to quality.”

Joe McCarthy, Marine Trade Underwriting Manager at awards sponsor NMU commented on the awards and NMU’s involvement: “To be recognised by their berth holders for consistently delivering a first class service is testament to each marina and their staff. All the winners and runners up today should be rightly proud of these awards.

“As multiple winners of insurance industry service awards ourselves, NMU really value the achievement of winning an award which is voted for entirely by your own customers.

“NMU are specialist insurers to the marine industry and we are proud sponsors of the NMU Marina Of The Year awards.”

To commemorate their achievement, winners and runners up of the Awards were presented with etched glass trophies and framed certificates by NMU company director, Nick Limb.

Jon White, General Manager of The Yacht Harbour Association, summed up the awards for 2018: “Yet again the competition for these much coveted awards was fierce. The winners, runners up and all the marinas voted for in this year’s NMU Marina of the Year competition deserve a huge round of applause. Right across the UK and around the world we are seeing marinas rise to the challenge of meeting the modern berth holder’s needs, ensuring they receive both excellent facilities and services.”