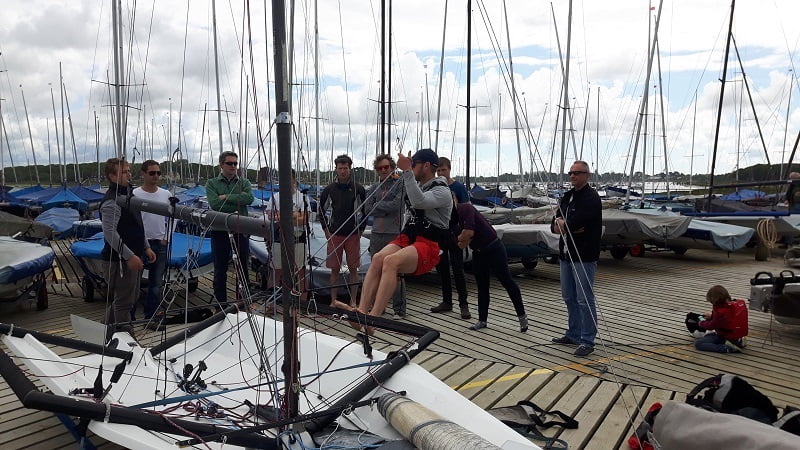 12 RS800s gathered at the lovely Itchenor SC over the weekend for an action packed two days of coaching with skiff gurus Harvey Hilary and Stevie Wilson.  They were greeted with wall to wall sunshine and all-too-tempting cake.

On arrival, crews were given rig set-up advice as they rigged their boats followed by a classroom session on sail trim through the wind range.  Back in the sunshine the group split in two for land drill, breaking down tacking and gybing into bite sized steps.  Half the teams were crew boom sheeting with Harvey showing the recommended technique, while the other half had Stevie demonstrating how the helm should get across the boat in a tidy and timely manner.

Meanwhile the wind had picked up to a feisty 20+ knots and the original plan for 4 hours on the water training in Hayling Bay was moderated to a session in the confines of Chichester Harbour channels at low water.  This turned out to be quite exciting enough for all the teams as they pin-balled about in the narrow channels at high speed with the edges approaching all too fast most of the time.  The training plan went out the window and survival became priority for nearly everyone until each in turn decided it was time to return to the club house for a cup of tea and more cake.

Safely back on dry land, more useful classroom stuff was followed by an enlightening practical demo on a land capsized RS800 of how each control changes the main and jib sail shape.

Sunday dawned with a perfect light breeze forecast to build gradually through the day.  So a packed program of on the water activities was planned and off we set to Hayling Bay.  The sail out the harbour was used as short upwind practice races.  Teams were streamed into groups to cater for the new-to-class and less-experienced up to the old-lags hoping to squeeze a little more speed out of their boats.  Once in the space of the bay, three boat groups lined up side by side for upwind and downwind tuning runs followed by a series of mini races on offset courses to keep focus on boat speed.

After a quick break for a picnic lunch the wind built on queue to champagne sailing conditions and we were into starting practice on square and port biased lines followed by a few short races to put all we had learnt into action.  A fun reaching sail home ended a great day on the water.

Many thanks to Harvey and Stevie for taking the time to share their knowledge with us all.