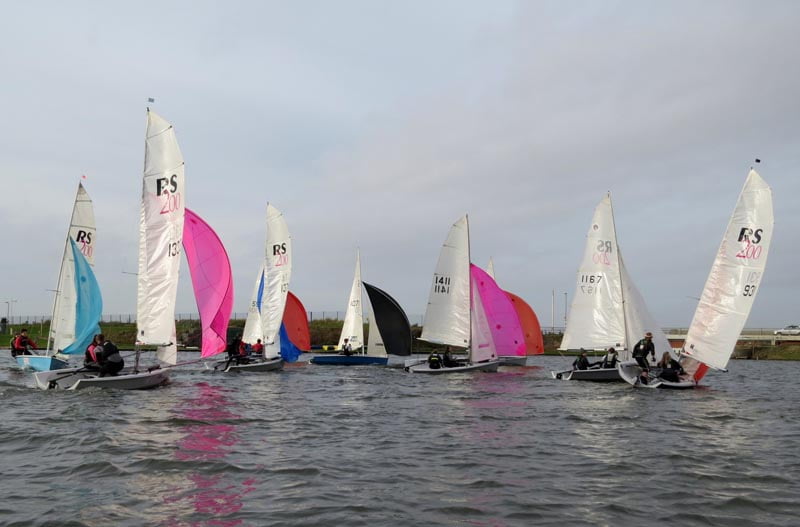 Last weekend was the first RS200 Northern Youth Squad training of the New Year and this was held at Southport. The main focus of the weekend was Spinnakers and this included; hoists, drops and angles. After the boats were rigged, the squad met in the training room, where we were joined by Adam Savage, Martin Penty and our guest coach Frances Peters, from RS Sailing who is a very experienced race helm. After Frances had introduced herself, she asked the squad if they knew about the different types of spinnaker hoists (personally, I didn’t know that there was different types of hoists). So it was explained that the kite could be hoisted in three ways; a gybe set, gybe hoist and a straight set.

In the morning straight after briefing we got on the water to complete the exercise, ‘6 lap sizzler’, to practice the different types of spinnaker hoists. Which consisted of approaching the mark on starboard for the first three laps, and then using the port lay line for the next three. There was a light breeze that proved to be very shifty.  This was a challenging exercise that highlighted what we needed to practice when we got back to our home clubs.

In the second session of the day our hoisting practice was put to good use, competing in gate start races. The gate boat for the first race was Ollie and I. The racing was very close between: Ollie/Esther, Emma/Faye, and Sam/George who were constantly swapping places. Being in the race conditions it allowed us to put our new skills to the test, by being able to perform them under pressure and having to make decisions quickly. After this we decided to switch around and have a crews race, which again was started with a gate boat (as we know this is used in the bigger events). The results were as follows: Esther/Ollie, Faye/Emma and George/Sam, with again very close racing. The crew’s race allows us to figure out the importance of communication as the roles have reversed. It also illustrates how different and difficult each other’s jobs are, making us more appreciative and understanding. Which highlights the fact that it is a team effort.

We reluctantly came off the water around 5 after a tiring day of training. After changing we had our last de-brief with Frances, who helped us considerably over the day by broadening our knowledge and skill sets.

Later on in the evening, pizza was ordered and all of the squad went out the bowling alley, which was across the road, to get to know each other better. This also gave the adults a chance to socialize, who I believe enjoyed the weekend very much.

Day 2- During the briefing the boats were put into pairs to do an exercise figuring out whether it was better to soak (go as low as possible) or to come up high and gybe into the gusts. Soaking also allowed us to practice the L shape movements around the boat, that Frances had taught us the previous day. It proved that in the lighter winds soaking paid off compared to staying high.  Then in the next exercise we followed Adam in the rib to complete the exercise, ‘River bank’ to put pressure on our tacking and spatial awareness. After making our way upwind we raced back down to the leeward mark and repeated the exercise a few more times.

In the afternoon the wind picked up considerably meaning that we had to change our mode of sailing to do well in the races. The day ended with practicing everything we had learnt over the weekend in 4 races. This time we had a set line instead of a gate start boat. The racing was very tight with again the first few boats in close competition. The results saw Sam/George first, Ollie/Esther and then Alistair/Charlotte. These results were the same for the second race. After the crews race, that we managed to win, this put us in the lead and allowed us to take the overall win for the weekend. In close pursuit of this were Sam/George and Alistair/Charlotte.

Overall it was an excellent weekends training, which ran very smoothly, due to careful planning by Erica. I would like to say thanks to; Adam and Martin for the training, Elise Scott and other helpers for the great food throughout the weekend. Id also like to say a special thank you to Frances Peters for giving up her time to come and help the squad progress and see all the hard work that has been put in to make the squad successful.