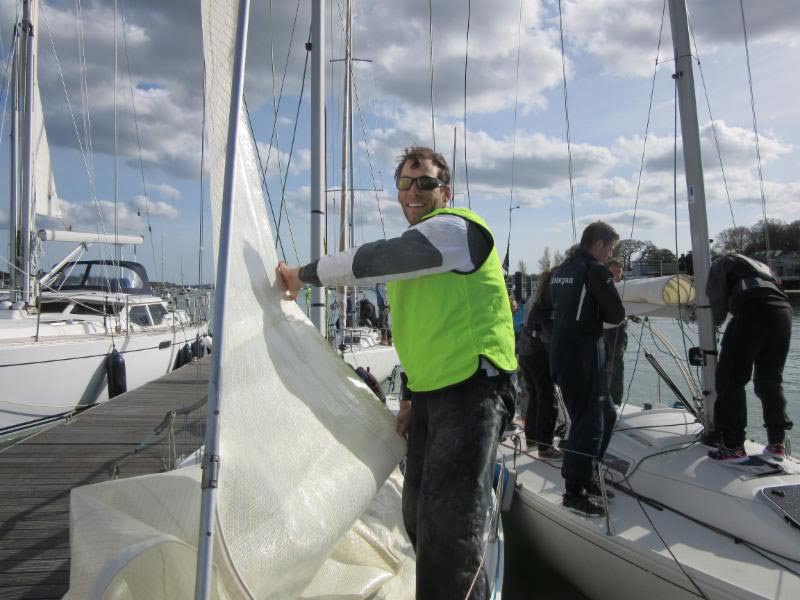 Matt Reid won his last match racing outing at one of the RYA Winter Series events at WPNSA, and Annabel Vose won hers.  They then came head to head in the final of the Royal Southern Match Cup Qualifier on Saturday 11 April in Hamble when Matt, after a seemingly disastrous Round Robin stage, got a grip in the knock out stages.

The top two prizes were Invitations to take part in the Royal Southern Match Cup from 10-14 June – the first ever official World Match Race Tour event to be held in the UK.  With five times World No.1 Ian Williams and several other Tour card holders taking part, the Match Cup presents a great opportunity for some of the rising GBR stars to take on the world’s best, on home waters.  But first, to win the Qualifier….

While the grey skies and rain cleared, Chief Umpire David Battye ran a Q&A session. Fittingly, as the session ended, out came the sun, the wind moderated a little, and off they went in the Club’s J/80s from the new Prince Philip Yacht Haven and headed for the Solent course.

At 23+ knots, the first Round Robin was white sails only and the results gave Annabel Vose and Bruno Van Dyke a strong early lead.  As the wind moderated a little, the J/80 gennakers came out for the second Round Robin and Henry Arnold came through strongly, while Matt Reid achieved a remarkable three penalties in one match (and so a DSQ) before even starting!

More wind brought out Flag ‘G’ again, no Gennakers, and that became the rule for the knock out stages.  Matt Reid beat Round Robin top scorer Henry Arnold in the first Semi, while Annabel Vose accounted for Bruno Van Dyke.

Matt Reid then won the Final and both he and Annabel Vose go through to the Royal Southern Match Cup in June.  Matt Reid said:

“This was incredibly close.  We made a few minor mistakes and they were hugely penalised.  In the end we knew what a close result this was.  Thanks to the Royal Southern for a great event, and we’ll be back in June.”

Matt Reid and Annabel Vose will join WMRT card holders Ian Williams (GBR), Keith Swinton (AUS), Reuben Corbett (NZL) and several other Top 50 match racers in Hamble in June.  The final qualifiers, including the winner of the qualifying Match Race in Ploen, Germany, will be announced in May.