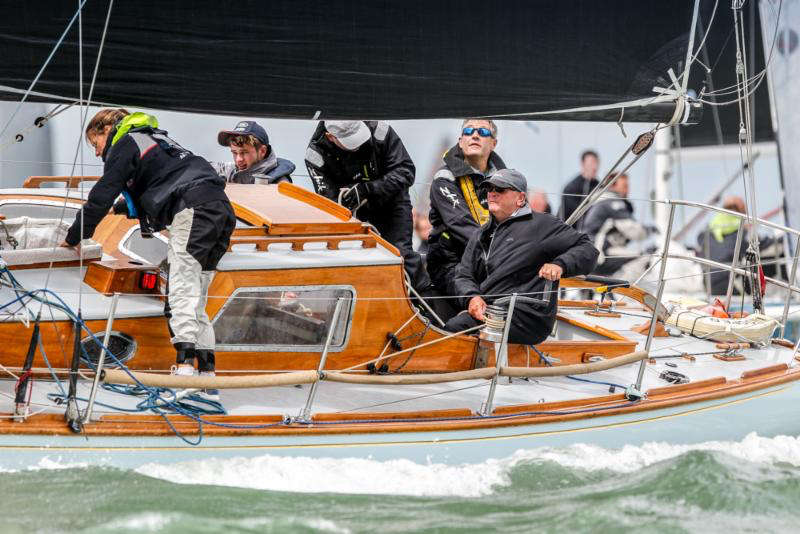 While conditions on day one built to a brutal 30 knots, today it was equally challenging at the Royal Ocean Racing Club’s IRC National championship. There was marginally less wind, but stronger gusts coming through in the squalls. Once again two windward-leewards were held followed by a longer round the cans race.

Today it was the turn of Giovanni Belgrano’s classic 1939 Laurent Giles sloop, Whooper in IRC Three to score straight bullets. On top of her two from yesterday, she now holds a nine point lead that will be tough to better.

“I guess it is her weather – maybe if it is less windy tomorrow, we’ll get a break,” observed Ian Braham, whose MG 346 MS Amlin Enigma, was second best scorer today in IRC Three with a 2-2-4, despite sailing one man down on a boat that Braham admitted is optimised for lighter conditions. “It was quite hard work, but the courses were great again. We made some good starts and it is really enjoyable.”

In IRC One the largest fastest boat in the fleet has prevailed. The Ker 46 Lady Mariposa scored two bullets yesterday, but was forced out of the final race with broken battens. Today they scored a 2-1-2 and, with a discard kicking in, they have now taken the lead in their class.

Skipper Dan Hardy admitted that in the second race they had gone off the boil, which allowed through their smaller sister, Andy Williams’ Ker 40 Keronimo. “We felt pressure from them today – their game has come up and they won’t let us get away with it, especially if we make any mistakes.”

As the fastest rated boat at the IRC Nationals, Lady Mariposa quickly ends up sailing her own race. As Hardy puts it “We have to make sure that we really get a clean start, get going and try not to look behind. We have to keep the hammer down, try to sail as simple and as fast as we can and, when we hit traffic, try to deal with that as best we can.” They were frequently catching and passing the FAST 40+ class today.

Johnny Vincent’s Ker 40+ Pace has edged three points clear in the FAST 40+ class, although Peter Morton’s new Carkeek Mk3, Girls on Film has scored more bullets, including two more today, albeit these sandwiching a sixth. RORC regular, Ireland’s Niall Dowling, stood in for Vincent today in what was his FAST 40+ baptism. “It was fantastic. They are great boats, fairly full on – we were doing 15-18 knots downwind. It is like sailing a dinghy. The key thing was keeping her going, to take the loads off to a minimum, especially off the wind. The guys did a great job to get me around.”

A few of the FAST 40+s had contretemps with a starboard tack IRC Three boat whose intentions seemed unclear. A casualty of this was Pace whose kite went for a dramatic trawl. “We had to stop the boat and go backwards to get it out of the water” recalled Dowling.

On the final beat to the finish of race three it was interesting to see Keronimo in IRC One holding her own against the FAST 40+s. As her tactician and sailmaker Kevin Sproul observed: “They are quicker downwind, because they are a ton lighter. VMG upwind, we were only a tiny bit slower.”

The string of bullets came to an end for Ed Fishwick’s Sun Fast 3600 Redshift Reloaded in IRC Two where today defending IRC National Champion, Adam Gosling and his JPK 1080+ Yes! were top scorers, posting a 1-1-2, leaving them just one point off the lead.

“He is a good sailor and they are sailing that boat really well” observed Gosling of his opponent. “This is the first time we’ve sailed the boat this year, so we’re getting rid of all the cobwebs and trying to remember how to sail her again.” And it simply being day two rather than day one was what Gosling attributed their performance to today, despite Redshift Reloaded appearing to be a weapon in big conditions, whereas Yes! has been re-optimised for lighter conditions. Yes! came out on top in today’s first race despite being fouled at the leeward by a FAST40+ which was bound for the finish as they were trying to head upwind.

Today the Tiny Mitchell Trophy winners were decided for the boats which performed best on day two of the IRC Nationals (with no discards). These were: Girls on Film (FAST 40+), Lady Mariposa (IRC One), Yes! (IRC Two) and Whooper (IRC Three) and will be awarded at tomorrow’s prizegiving at the RORC Cowes clubhouse.

In the meantime two more races are scheduled tomorrow with the wind forecast to be closer to 15 knots than 20.