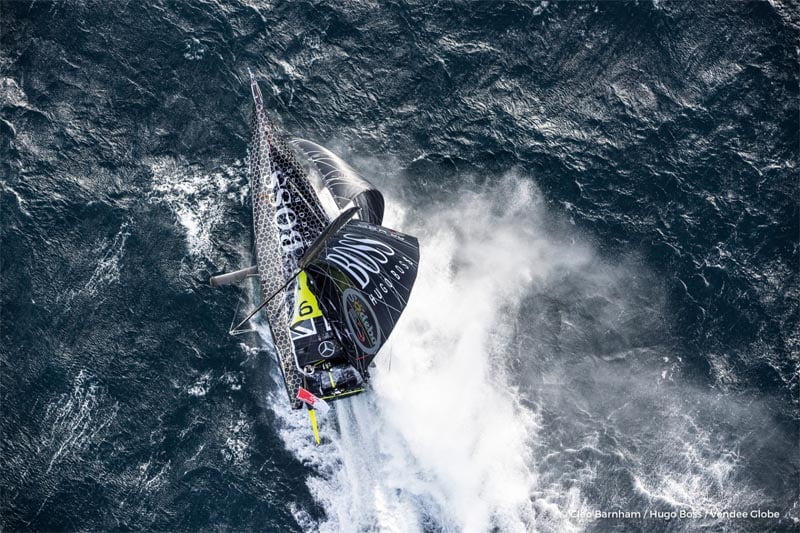 Black-hulled Hugo Boss has gained and leads the Vendée Globe out of the ‘Pot au Noir’, the Doldrums by over eighty miles. The British skipper has made 40 miles on the chasing group since this morning. Tanguy de Lamotte has reached Mindello, in the Cape Verdes where he plans to make repairs to his masthead.

Vendée Globe leader Alex Thomson’s Doldrums strategy is simple and straightforward. At midday today, after several hours of rain and cloud cover, in a light breeze, the British skipper of Hugo Boss concluded: “I just want to get out of this mess as quickly as possible because I hate it.” Taking the most direct, southerly, shortest route through the Doldrums looks to have paid handsomely. While all of his closest French rivals had first slanted west then – later this afternoon – angled south to parallel the course taken by Hugo Boss – Thomson’s single minded choice had earned him another 40 miles over the course of Monday. The black hulled Hugo Boss looked to be easing out of the ‘Pot au Noir’ this afternoon and was already 87 miles clear of second placed Armel Le Cléac’h on the mid-afternoon rankings.

Satellite images showed Thomson with a further 30 or 40 miles of cloud activity and variable easterly breezes before he should press the bow down in the first of the SE’ly winds which prevail in the north of the South Atlantic.  The ‘mess’ should be behind him. And on the mid afternoon rankings the British skipper was still making almost double the speed of his chasing rivals, 12kts versus 6.2. It will be early Tuesday maybe before the real outcome is evident, but it looks for the meantime like Thomson has pulled off a second consecutive coup d’état against his French rivals.

On Saturday evening he gained by passing directly through the Cabo Verde islands to take the lead, making two perfectly timed gybes to exit the island channel on a perfect, accelerating wind shift. It now looks like his lone strategy, sticking as much to gut instinct, experience and simple logic as the appliance of brain curdling science, has paid again. “It is difficult. You can’t really look at the GRIB files because they don’t really mean much in this area, you can look at Satellite pictures, you can look at Quikscat images which show actually what wind angles are at a certain time. But there is still a fair amount of guess work, a fair amount of luck involved. To me there is no fixed science. If you were to speak to Jean Yves Bernot (ace French ‘meteo’ specialist who coaches many of the French skippers) he makes a science of it. But for me, I entered the Doldrums further east than anyone else, but here I am just trying to play my angles, the best VMG, getting south as quickly as possible. I am playing the clouds as they come, whatever local effects there are.”

“I just want to get out of here as quickly as possible.”

Of his Cabo Verde advance which gained him the lead, Thomson – who is the first British skipper to lead the Vendée Globe since December 2008– explained: “I could see on the high resolution GRIBs that they were forecasting a shift and a slight acceleration at the end of the channel there. And a bit of a shift to the east. That meant I could get a good angle out, after I had stuck in my two gybes. My objective was really to miss the wind shadow of the next island which is about 2000m high. So that was my reasoning. I was not sure it was going to work out perfectly. But it worked brilliantly. I am happy with that.” The leader should break across the Equator tomorrow night, potentially setting a new reference for the race, over a day quicker than the best time set in 2004-5.

The South Atlantic ahead looks complicated. But because the Saint Helena high pressure is messy and well displaced to the east there might be a more direct passage in better breeze for the leading group of seven before the SE’ly and E’ly breezes die away and become variable.

Tanguy de Lamotte reached Mindelo in the Cape Verde islands around 1500hrs UTC, where he is expected to start repairs to his masthead. The race rules are very specific. He is allowed to pick up an existing mooring and leave it, unassisted, or he can set his own anchor. If he breaks his engine seal and uses his engine he must tell the International Jury who will apply a penalty, if considered applicable.