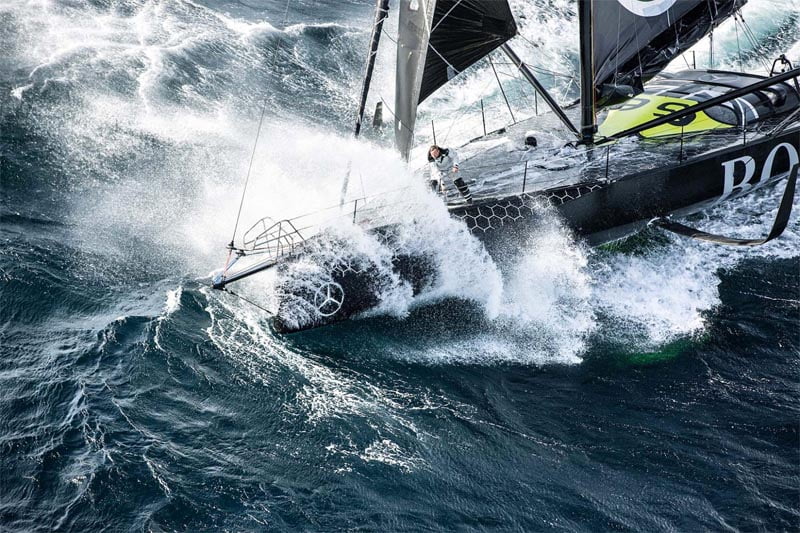 The eighth Vendée Globe has only just begun and for the frontrunners, the Bay of Biscay will soon be in their wake. The fleet has split into three distinct groups spread over 120 miles, while the leaders have only sailed 300. Britain’s Alex Thomson has taken the lead.

As expected, the conditions in the Bay of Biscay are favouring the new foilers. The three leading skippers, Alex Thomson (Hugo Boss), Jean-Pierre Dick (St Michel-Virbac) and Armel Le Cléac’h (Banque Populaire) all have boats equipped with these appendages. Slightly south of those chasing them, these three are close together and have built up a lead of 14 miles over fourth placed Safran skippered by Morgan Lagravière. Speeds are varying on these VPLP-Verdier designed boats as is the wind strength, but occasionally they are reaching speeds worthy of multihulls of around 23 knots.

With these variable northerlies gusting from 12 to 30 knots, the skippers are having to work hard, as Kito de Pavant explained this morning. But the favourites are coping particularly well. The fleet has separated into three groups. All the foilers except No Way Back are in the leading group (Pieter Heerema said from the outset that he would determine his own pace). In addition to the trio out in front, we can see Morgan Lagravière’s Safran, Jérémie Beyou’s Maître CoQ and Sébastien Josse’s Edmond de Rothschild in 4th, 6th and 7th place respectively.

Among the boats with straight daggerboards, it is Vincent Riou, who is doing the best, after a great start yesterday, as PRB is currently in fifth place. Paul Meilhat (SMA) aboard the boat that won the last edition (ex-Macif) is there in eighth place. 20 or 30 miles back from the leader, thereis battle raging between boats from the 2008 generation skippered by Yann Eliès, Tanguy de Lamotte, Thomas Ruyant, Jean Le Cam, Bertrand de Broc and Louis Burton.

The rich get richer

The second group is some sixty miles back from the leaders. In this group we can find Fabrice Amedeo, Kito de Pavant (who lost a lot of time last night sorting out a sail problem), Arnaud Boissières, Stéphane Le Diraison, the Japanese sailor Kojiro Shiraishi and Conrad Colman. Finally in the third group at the rear of the fleet we can see our adventurers, whose main goal is to complete the round the world voyage. They are now between 70 and 120 miles behind the frontrunners, which is quite a large gap after 20 hours of racing.

Current weather forecasts are likely to favour those at the front. The Azores high is stretching eastwards and moving towards the south (following the fleet, which is going to sail close to the Spanish coast). That risks shutting off the Portuguese trade winds sometime tomorrow. So they are going to have to try to avoid taking their time sailing down past Portugal. The boats out in front will continue to speed southwards, while those behind them are likely to be slowed off Gibraltar. It looks like a case of the rich getting richer and the frontrunners making their getaway.