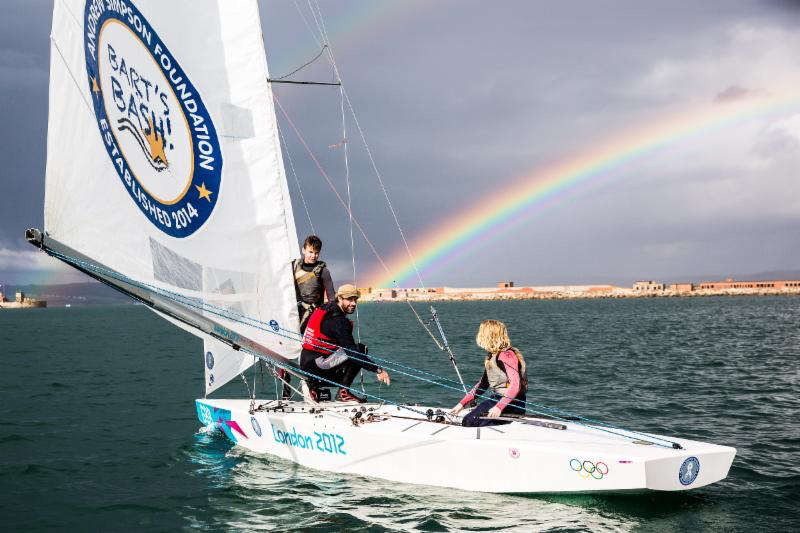 The fourth year of the world’s largest sailing event, Bart’s Bash, got off to a terrific start in New Zealand at the Whangaruru Sailing Club in Oakura Bay, New Zealand as sailing and yacht clubs around the world were gearing up to run their own Bart’s Bash races.

Mike Carter from the Royal Brunei Yacht Club reported on a great day. “After a promising start the wind dropped and a strong current meant that only seven boats could complete the course. Everyone including a number of first time sailors enjoyed the sail. Getting our results in early meant we could enjoy posing for some photos!”

Setting the scene for the Bart’s Bash that took place today on behalf of the Andrew Simpson Foundation who are headquartered at the Weymouth and Portland National Sailing Academy, CEO, Pete Allam said, “We knew it was going to be a tough call getting 125 boats off the start line at the appointed time of 1300 when we knew that the wind was due to die and change direction by 180 degrees. However, after a couple of rainstorms we got everyone off the start line and enjoyed a great race.”

When asked about the age range of the sailors, their sailing ability and the types of boats that were out sailing today, Pete confirmed that, yet again, this annual sailing fest attracted sailors from across the generations competing in Oppies, Lasers, RS Fevers, Toppers, Foiling Nacra 17s, Venture Keelboats, 29ers and even a couple of Foiling Moths although conditions weren’t ideal for foiling today. Novices, World Champions and Gold medallists joined together on the course.

A special day for so many

Of particular poignance was Andrew Simpson Sailing Foundation Trustee and a Founder, Iain Percy, sailing his 2017 Bart’s Bash in the original Star boat that he and Andrew ‘Bart’ Simpson sailed their last race together in at the London 2012 Olympics, winning Silver, to add to their Olympic Gold medal achieved in the same class previously, at the 2008 Beijing Games.

Another special moment came with the announcement that two young sailors, Ben Thomas and Billy Hope, volunteers at the Andrew Simpson Sailing Centre, had been selected to race their Bart’s Bash with Iain in the Star. These deserving boys have between them given around 2,000 hours of their time to help young people learn to sail. Both of them are keen racers and have competed at national level.

Meanwhile, at Manor Park SC in Kings Bromley, Staffordshire, today’s Bart’s Bash report was equally positive. They had a “fabulous fun race” with 21 boats on the water and crews aged from seven to 76 with sailing experience ranging from six weeks to over 60 years…and a Topper winner!

An easy way of helping support Andrew ‘Bart’ Simpson’s legacy is TEXT TO DONATE (any time/any amount of money from a fiver upwards!) e.g.: BART17 £5 to 70070