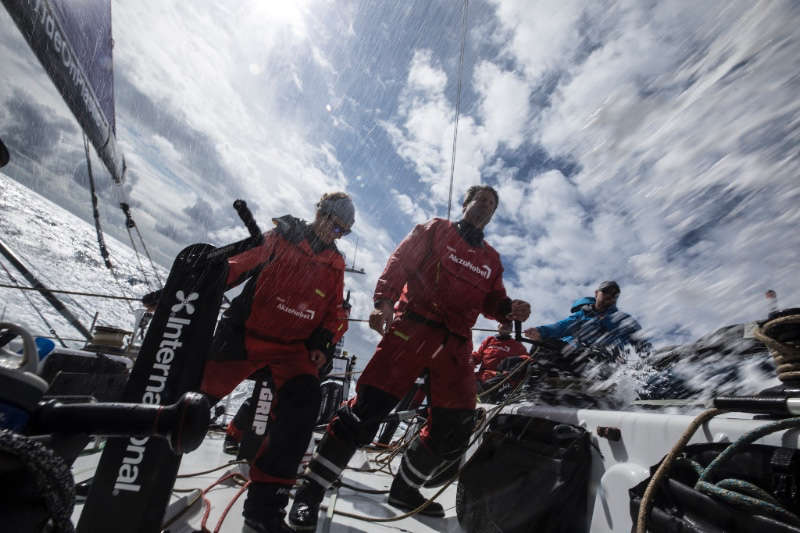 Team AkzoNobel, the Dutch yacht racing team campaigning for the 2017-18 Volvo Ocean Race around the world, has finished the second stage of the four-part Leg Zero qualification series – the Rolex Fastnet Race – in fourth place.

The team completed the 603-nautical mile (1,117-kilometer) course from Cowes on the Isle of Wight and around Ireland’s Fastnet Rock in two days 15 hours 52 minutes and 40 seconds.

The Leg Zero qualifying series does not count towards the Volvo Ocean Race itself.

Team AkzoNobel was the front runner for much of the Fastnet Race and led the seven-boat fleet of identical Volvo Ocean 65 one design yachts around Land’s End and across the Irish Sea to the solitary Fastnet Rock off the southern tip of Ireland.

Despite mounting pressure from the closely packed fleet nipping at their transom all the way across the Irish Sea, Tienpont’s crew of seven men and two women held the lead until just before dawn on Tuesday, August 8, when they had to cede the top spot to China’s Dongfeng Race Team.

Dongfeng and team AkzoNobel rounded the Fastnet Rock shortly after 07.00 UTC (08.00 BST), around 10-minutes apart. Spanish team Mapfre was the next to make the turn back towards England soon after.

With the wind now behind them the boats accelerated to 17-knots (31-kilometers per hour) after hoisting their gigantic A3 headsails on the way to the final turn of the course – the Bishop Rock at the Scilly Isles.

After a melee of maneuvering among the boats at the Scillies, team AkzoNobel emerged in fourth place, close behind Dutch rivals Team Brunel. With few tactical options left in the final miles into Plymouth Tienpont’s team could do little to challenge for third and ultimately had to settle for holding their position at the finish.

Although disappointed not to have been within striking distance of the top two teams – Dongfeng and Mapfre – on the run in to Plymouth, a weary Tienpont said there were many positives the team could take from its performance.

“We are all pretty tired – it has been very intense racing,” he said. “For us, the first highlight was to stick with the group out of the Solent. On the first night, good tactics along the coast put us in a strong position. Around Land’s End was another tactical mess for everyone, but we got away there pretty nicely.

“We were in the top three for 24-hours and had a strong lead for a bit. It was hard: during the whole race, every time you thought you were sort of away, the back of the fleet came back at you.”

Team AkzoNobel is the only campaign to build a new boat for the latest edition of the Volvo Ocean Race. With less sea miles under their keel than some teams, they took full advantage of the opportunity to gauge themselves against the other boats during the Fastnet.

“You always feel a little bit disappointed in those moments when you know that you weren’t fast enough or you didn’t find that extra gear,” Tienpont said. “But I think looking at the overall picture, it was a really good start for us.

“We’ve found out that there are plenty of areas where we are fast, but there are also some areas we need to work on. The one thing we did really well was boat handling and we will take a lot of confidence from that.”

Even before the sailors had shuffled sleepily away down the pontoon of the Mountbatten Marina in Plymouth, heading for some well-earned rest, the team’s shore crew had swung into action to get the team AkzoNobel boat ready for stage three of Leg Zero – a race across the English Channel to the French port of St. Malo starting the following day, Thursday, August 10.

The fourth and final stage of Leg Zero – a race from St. Malo to Lisbon, Portugal – begins on Sunday, August 13.