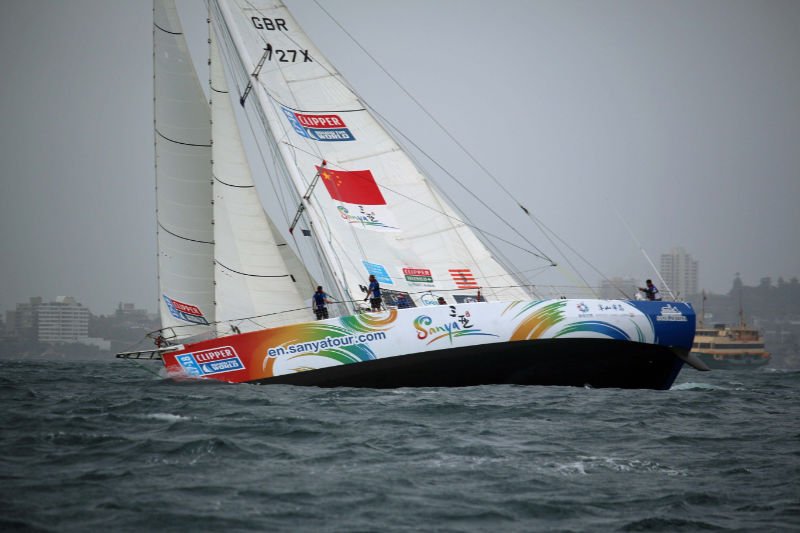 Sanya Serenity Coast claimed victory in a thrilling finale to Race 4: The ClipperTelemed+ Tasman Test, the first stage of the All-Australian Leg of the Clipper 2017-18 Round the World Yacht Race.

It was one of the tightest ever Clipper Race finishes into Sydney, which saw the top three teams finish with an hour and half of each other after 12 days racing around 2500 nautical miles from Fremantle, Western Australia, past the South of Tasmania and a hard slog upwind towards the Sydney Heads.

Qingdao, Sanya Serenity Coast and Visit Seattle had been in the top half of the fleet since Day 3 of the race and occupied the podium positions since Day 8. Ultimately, it was Sanya Serenity Coast who claimed line honours after crossing the finish line first at 08:21:18 local Australian Eastern Standard Time (21:21:18 UTC). Just 17 minutes later Visit Seattle crossed the line in second at 08:38:03 (21:38:03 UTC) and then Qingdao in third at 09:43:06 (22:43:06 UTC)

Victorious skipper, Wendy Tuck, said: “It was the most nerve-racking race of my life. The lead changed so much, it was such a competitive race so it feels amazing to get the win. Especially with all my family and friends here watching.”

Nikki Henderson, skipper of second placed Visit Seattle, reported: “It was really good fun. It was really hard work but it was nice to have some inshore racing and it is a really good feeling to get a podium. If you have to come second to someone, then I’m pretty happy for it to be Wendy.”

With its third place finish, Qingdao will remain first in the overall Clipper Race standings, after claiming four bonus points in Race 4. Skipper Chris Kobusch, on arrival into Sydney, said: “We had a good run around Tasmania and then we sailed into another wind hole. The rest of the fleet started catching up and we were then in a battle with Sanya Serenity Coast and Visit Seattle up the east coast of Australia. On the last day they managed to overtake us, we had one really bad tack and they got us but well done to them. But we are really stoked to get a podium here in Sydney.”

Congratulating the teams, Clipper Race Chairman and Founder Sir Robin Knox-Johnston said: “This really has been a nail-biting contest, particularly between the top three teams, and the whole Clipper Race fleet has demonstrated great strength of character to head back into the Southern Ocean after one of the toughest legs in Clipper Race history.

“The teams finally had the extended downwind Roaring Forties sailing conditions that they had sought before succumbing to the fickle winds around Tasmania and then the tough upwind slog to Sydney. The Skippers and crew can enjoy a well-earned rest for the festive season knowing that the teams have made it halfway around the world – what an achievement and there’s more to come yet!”

The ClipperTelemed+ Tasman Test has lived up to its name with a range of different conditions for the teams to contend with but once again, the matched fleet of Clipper 70s are expected to arrive at the Finish Line in quick succession with all eleven boats expected to arrive by the end of Saturday evening.

The Clipper Race fleet will once again be hosted by the Cruising Yacht Club of Australia in Rushcutters Bay and can look forward to an entertaining schedule in the build up to the iconic Rolex Sydney Hobart Yacht Race, which begins on Boxing Day (26 December) 2017. This will be the third time that the Clipper 70s have joined this blue water classic with its spectacular start in view of the Sydney Harbour Bridge and the fleet will have already covered over 17,000 of the race’s 40,000 nautical mile route since Race Start in Liverpool on 20 August.