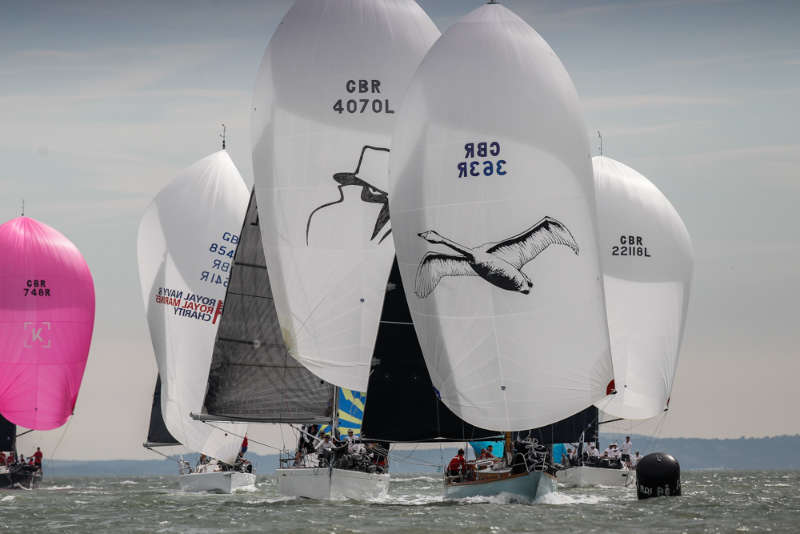 RORC – Light winds, strong tides and shouting on day one of the IRC Nationals

RORC – Light winds, strong tides and shouting on day one of the IRC Nationals

Despite a dismal light wind and strong tide forecast that had most crews preparing for an afternoon ashore, a light breeze built early in the afternoon, miraculously allowing the Royal Ocean Racing Club’s two race committees to lay on a full three race opening day of the IRC National Championship.
As the rating rule jointly operated by the RORC and the Union Nationale pour la Course au Large (UNCL) in France, IRC seeks to create a level playing field between all kinds of boats. At this year’s IRC Nationals this is being put to the test with a wide array from grand prix racers to cruisers, from brand new thoroughbreds to 80 years wooden classics, and in size from the two TP52s down to Quarter Tonners and HP30s.
Due to the high tides this weekend, the RORC divided the fleet in two so that the larger IRC 1, 2 and FAST40+ boats could race in deeper water in the western Solent while IRC 3 and 4 sailing windward-leewards off Hill Head.
A particular feature of sailing in the western Solent today was the powerful ebb tide particularly in race one that was causing difficult pile-ups and tricky manoeuvring at the marks. This was especially true at the top mark where the fleet arrived in strongest favourable current on port, directly into the path of boats looking to gybe set and get inshore, out of the foul tide. Because of largely tide-related incidents the jury was sitting late this evening.

Leading the charge in IRC 1, as expected, is Tony Langley’s high polished Gladiator team. The 52 Super Series team won two of today’s three races, only dropping one point to the De Graaf family’s Ker 43 Baraka GP.
“We had fun!” said jib trimmer Dirk de Graaf. “It is a long time since we sailed against two TP52s and it is always nice to race the best Tonnerre ever. We did a good job!” However the light wind and strong tidal conditions made mark roundings challenging. “The first bottom mark was hard – we dropped the kite too early and we really had to point low. We lost 30 seconds over that. But then our laylines were better.” And this was the race they won.

In the FAST40+ there was a clean sweep for Peter Morton’s Carkeek 40 Mk3 Girls on Film. Similarly the only other boat to score three bullets today was Glyn Locke’s Farr 280 Toucan in the HP30 class, which she leads from the modified Farr 30 Pegasus and Jessica Fries’s Fareast 28 Mittens Revenge.

Largest class by far is IRC 2, including the entire Performance 40 fleet. Here after three races two boats are tied at the top – the Ker 39 Rumbleflurg and J/122 Black Dog. However thanks to the conditions it was a high scoring day for all.
Former RORC Admiral Andrew McIrvine claimed race one aboard his First 40 La Réponse which subsequently suffered a broken spinnaker pole. However the next two races were won by Stuart Sawyer’s Falmouth-based Black Dog, which leads IRC Two on countback.

“We are delighted although somewhat shocked too – hopefully it will be a long evening so we can enjoy this as long as possible,” enthused Sawyer. This is his first IRC Nationals, although he has previously won the IRC South West Championship. “The IRC Nationals is a benchmark to see how we are doing as a Cornish boat. Other than our tactician, we are all Corinthians although this is our ninth season sailing together.”
As to today’s competition Sawyer continued: “The first race was tricky – we got caught out at the leeward mark and were about seven deep and got buried. In the second race, we had a really nice start and felt quite comfortable and managed to hold our lane quite well because we are one of the slower boats. It feels like we are threading the eye of a needle – being rolled from top and with someone higher below.” On board North Sails’ Shane Hughes calls tactics.
Surprisingly it is not Black Dog but Ian Schenkel’s Ker 39 Rumbleflurg that leads Black Dog by a point when Performance 40 results are extracted from IRC Two.

Looking strong to recapture the IRC Nationals title he last won with Strait Dealer in 2012, David Franks and his J/112E Leon was one point off a perfect scoreline in IRC 3.
Franks congratulated the race officials for getting in three races. “It was a pleasant surprise when the wind came in and then we got three races.” Perhaps equally surprising was recovering a second, the only blemish on their scoreline, despite being called OCS in race two. “We had a good recovery and a good first beat, which got us back into play.
“I have been racing too long to get too excited about the first day of a three day regatta. We are going well but our competition might give us a thrashing tomorrow,” Franks concluded.

Four diverse boats are within a point of leading IRC 4, where Nigel Goodhew’s Sun Fast 3200 Cora is tied at the top with Catrina Southworth’s Quarter Tonner Protis. Goodhew who usually races Cora offshore doublehanded with son Tim, says they enjoyed today. “The race officer snatched it out of the jaws of disaster and it was an absolute victory. We had really good racing which it got better and better – we had about 16 knots at the end.”

Today was all about consistency in IRC 4 – none of the top four won races. Christopher Preston’s J/109 Jubilee won the first and last race, but these sandwiched a 12th, while race two was claimed by Giovanni Belgrano’s defending IRC National Champion, the 1939 Laurent Giles-designed Whooper.
Racing is again looking light tomorrow but maybe the race committee will again get lucky with the conditions.