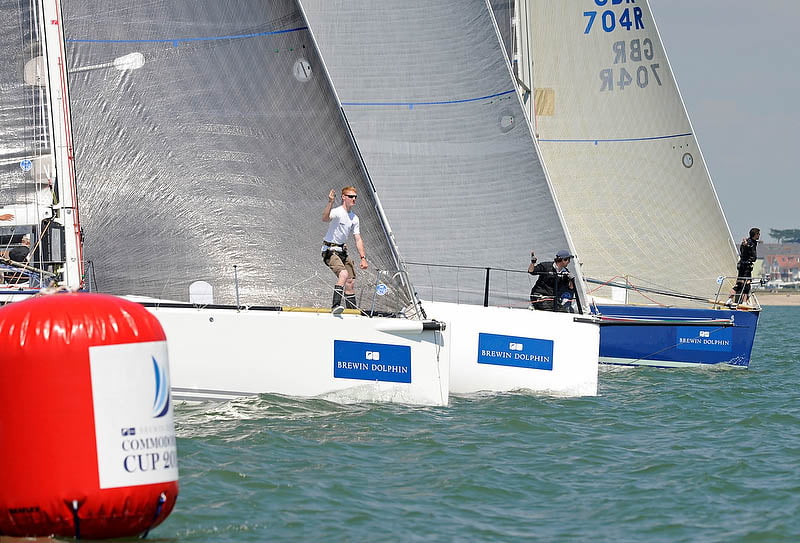 The 2016 Commodores’ Cup has been formally launched, with the British investment management and financial planning company Brewin Dolphin continuing its sponsorship of the club’s biennial flagship event for national three boat teams with amateur crews. The Brewin Dolphin Commodores’ Cup will next take place out of Cowes, Isle of Wight over 23rd-30th July 2016.

Something of a surprise was the first team officially to enter the 2016 event being not one of the regulars – France, Ireland or the UK – but Israel. Alongside judo, sailing is Israel’s top Olympic sport, but to date this hasn’t extended to big boats.

In addition to the Israelis, and the four UK teams, France is expected to mount a strong entry, having not won the event since 2006. The defending champion, Ireland, is expected to return, plus at least one Dutch team and possibly another composite Benelux team. Hong Kong has shown interest and there remains the strong possibility of a team from Canada.

This is the result of the RORC putting in extra effort to drum up more international competition, says RORC CEO, Eddie Warden Owen. “We have been more proactive about advertising the race worldwide, that it is a really international event and as a Corinthian, amateur event, it is worth winning.”

The Israeli campaign is being spearheaded by British sailor Richard Loftus, well known for campaigning his Swan 65, Desperado. Under Brewin Dolphin Commodores’ Cup rules, 50% of the crew must be Israeli nationals and Loftus has arranged with the Israeli Sailing Association to run a trials to select the best sailors. The intention is to start with 50 and whittle them down to the top 20, who will then train from March onwards.

Loftus says he will not be entering Desperado and he is also not expecting boats to come from Israel. “I am optimistic that I can find English or foreign owners with an Israeli connection who would like to enter the event. I can say to them ‘you come with your crew, bring your bowman, etc, but I’ll provide half the guys and they will be seriously good sailors. It is a good deal for both parties.”

“At the moment there is a lot of interest – 12-15 boats,” says Aisher, Chairman of Selectors. “Hopefully we’ll put up a suitable team to win the trophy back from the Irish. Having competed three times myself, it is a great event to be part of – it puts together people, not only with their boats, but bringing them together as a team.”

The selection process will take place at weekend trial events over April-May, plus the RORC’s Cervantes Trophy and De Guingand Bowl races.

Britain and Ireland have alternated winning the Brewin Dolphin Commodores’ Cup since 2008. In theory next year is the turn of the British again.

Once again the race format will include an offshore race and around the Isle of Wight, but the number of scheduled inshores has increased from six to ten. Racing Manager of the RORC, Nick Elliott explains: “We appreciate the time and effort people put in to coming to the regatta – they want to be out there enjoying the Solent.”

In 2014 the fleet started en masse to make it a spectacle. In 2016, in response to competitor feedback, the small boats will get their own starts. Warden Owen explains: “The masse start was tough on the small boats – they had to fight for clear air, against the bigger boats.”

Similarly the number of ISAF Group 3 ‘professional’ sailors in each team has increased to six, divided up across the three boats. Nick Elliott explains: “It is a Corinthian regatta, but the professional element helps to keep it at the very high level it is.”

National Director of Brewin Dolphin, Rupert Tyler said Brewin Dolphin was pleased to be back for a third term as sponsor of the Commodores’ Cup. “It has given us a great deal of pleasure to our directorate, our staff, all our employees, our clientele, our shareholders, and we are thrilled to be able to give you so much pleasure indirectly as well. It behoves me to wish everyone very good luck who is participating and in the organisation.”