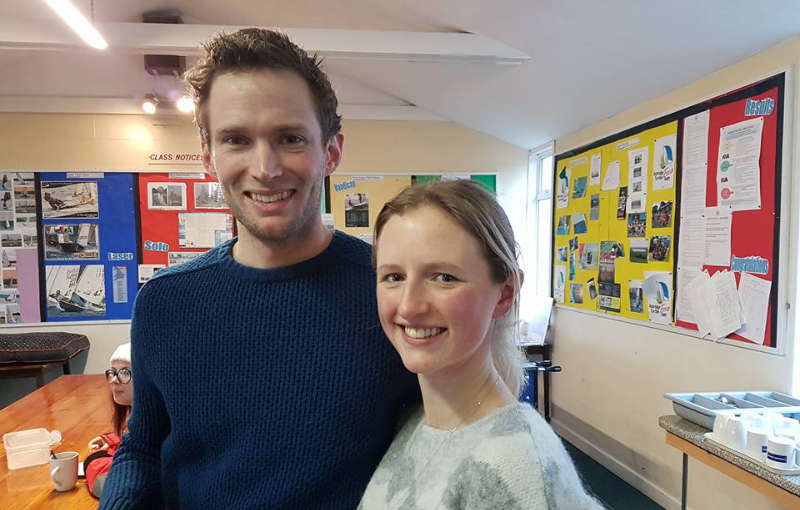 For a lot of people, an ideal winters weekend is to be sat by an open fire, beverage of choice in hand, looking out the window at the crisp cold weather, with a feeling of smugness. Thankfully however, there are also a group of people who, although I’m sure would appreciate the above, would much rather be out on the water in their RS200 battling it out in a super competitive fleet for the chance to become the 2018 RS200 Winter Champions. This was a reality for 18 teams of hardy sailors at Bristol Corinthian YC on 3rd and 4th of March, for the first event of the new year, the Winter Championships, an event sponsored by Rooster Sailing, and the first in the 2018 Rooster RS200 National Tour.

A flat calm greeted the fleet, thankfully the warmth of the clubhouse and the smell of bacon rolls enticed the sailors inside to await the briefing, and with that the wind began to appear. A forecast due to swing 180 degrees at some point during the racing, and build to 8-9kts isn’t the most ideal conditions, but this new breeze appeared to have disregarded this forecast and held out for the first race to provide unexpected lively planing conditions. A closely fought battle at the front saw Hamish Walker/Emma Hivey take the first bullet, from Alistair Norris/Helen Summersgill in second place and John Teague/Jo Hewitson taking third from the much talked about eye-catching boat of Olly Turner/Sam Mottershead.

Race 2 saw the wind drop back to its forecasted light wind, with some shifts to keep the fleet on their toes. This was too good an opportunity to miss for Rob Henderson/Mari Shepherd who pulled off a spectacular pin end port tack flyer, crossing the fleet in some style. Walker/Hivey worked their way into the lead to overtake Henderson/Sheperd to take a second win of the day, from Hannah/Nick Smith who showed fantastic speed, rapidly pulling through the fleet to score their best race of the event in the waning wind with David Jessop/Clare Michelmore rounding out the top 4. Race 3 saw Norris/Summersgill break the dominance of Walker/Hivey, to well and truly put their hat in the ring to take the bullet, from the very consistent Walker/Hivey in second place from Henderson/Shepherd and Jessop/Michelmore again rounding out the top 4.

The rumours of a fourth race on Saturday, with a local speciality of a windy North Easterly looming for Sunday thankfully never materialised, instead cold hands and feet were warmed with an evening of rugby, plenty of superb cake, the class AGM, a fantastic Chilli and the all important cider tasting. This soon revealed itself as a drink the bar dry of cider event, although miraculously there didn’t appear to be any evidence of the legendary cider hangovers making an appearance on Sunday morning!

Onto Sunday, which really did put the Winter into the Championships, boy was it cold! With a Northerly wind blowing over the clubhouse, the fleet could have been mistaken for thinking they were in for a comfortable ride for the day. The tell tale signs of a booming 25kts on the far lee shore promised quite the opposite! Intrepidly launching into this ominous and unpredictable wind quickly proved more of a mind game, instead the breeze moderated to a gusty and shifty, but perfectly tameable 15-20kts.

The first race of the day saw the fleet bamboozled and thrilled in equal measure, as the flicking wind saw big gains and losses to be had upwind, and even more up for grabs downwind. This was to be a day of snakes and ladders! Off the back of their previous days winning finish, Norris/Summersgill took the initiative to post an impressive first win of the day, from the port flying specialists Henderson/Shepherd in second, with Turner/Mottershead putting in third, and Walker/Hivey in fourth.

The second race of the day saw the wind continue, with the fleet still none the wiser as to whether there was any pattern to be found in the shifts, but eager for more of this very competitive and thrilling racing. Hitting the gusts downwind played dividends, with Walker/Hivey and Teague/Hewitson pouncing on one such monster to leave the fleet trailing behind downwind, pulling out a large lead on the fleet. With much place swapping the battle was put to bed on the final run with Walker/Hivey taking their third win of the event, from Teague/Hewitson, with Jessop/Michelmore leading the chasing pack in third from Norris/Summersgill in fourth.

So to the final race, with more of the same challenging and brilliantly fun conditions, a three horse race at the front soon appeared, following the mother of all headers putting Hederson/Shepherd in to windward at the top mark. Yet again pouncing on one of the big gusts on the run paid massively, with Norris/Summersgill, Turner/Mottershead and Teague/Hewitson all storming away from the fleet, with timing everything, Turner/Mottershead were caught out mid gybe to leave this now a two horse race. The race went down to the final gybe Teague/Hewitson appearing to have the win in their grasp until the final gybe into the leeward mark where Norris/Summersgill found a race winning gust to take the lead in the nick of time. Turner/Mottershead made a rapid recovery from their previous dip to take a comfortable third, from Jessop/Michelmore leading the pack home in fourth.

So the final scores on the doors, now this was a close one, with the fleet unsure who had won, the places too close to call throughout the fleet. This had truly been an enjoyable day on the water, yes it was challenging, but the fleet had a grin on their faces. Being crowned winners of the Winter Championships 2018 were Alistair Norris/Helen Summersgill from Bristol Corinthian YC, who won an incredibly close event on equal points and a virtually identical sets of results from Hamish Walker/Emma Hivey from Hayling Island SC in second place with third place being won by Rob Henderson/Mari Shepherd from Hayling Island SC. First Silver fleet boat was Steve/Becky Wilson from RS Sailing from Chris Bishop/Naomi Pound from Bristol Corinthian in second. The Bronze fleet was won by race two speed demons Hannah/Nick Smith from Thornbury with Nick Smith/Max Ross from Bristol Corinthian YC in second place. First Youth was Izzy Savage in 9th place, with first Youth boat Tom Fenmore/Kirsten Macadie in 14th and first Junior, helming for the first time, was Abi Campbell in 16th. Thanks to the race officer and his team, Arky, along with all the volunteers at Bristol for such a friendly event and Rooster sailing for the customised Rooster RS National Tour prize neck gaiters.

Next stop for the Nstional Tour is the Multifleet RS Spints at Rutland SC on 21st and 22nd April.  Also open for entry are the Emergence of Season Championshipas at Queen Mary, The RS Reunion Regatta for all those who were sailing an RS in the early days from 1995-2005 and the RS Eurocup at Carnac; plus the regional tours all get going soon.