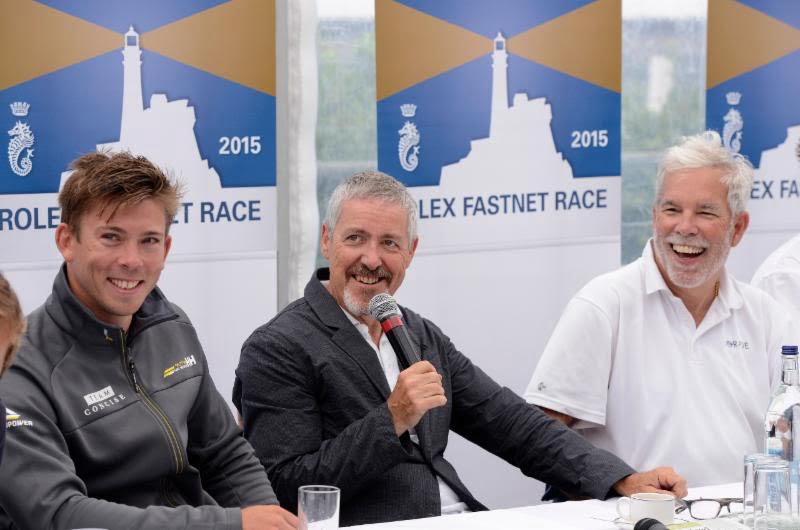 This morning at the RORC’s new Cowes clubhouse, a select cross-section of competitors in this Sunday’s Rolex Fastnet Race shared their observations about the Royal Ocean Racing Club’s biennial 600 mile flagship event.

By way of introduction, RORC CEO Eddie Warden Owen said he was delighted with the record-sized fleet of 370. “We thought that it was pretty special in 2013 when we had a record entry of 336. This year we have ten IMOCA 60s and over 22 Class40s, while down in the middle orders there are the J/109s and Sigma 38s where people are doing this for passion, for an adventure.”

The main feature of this year’s race looks set to be the light forecast. RORC Racing Manager Nick Elliot put a positive spin on it: “It is looking very light at the start, but there is a good possibility for a light sea breeze as the afternoon wears on.”

Warden Owen wisely advised: “In light airs, it is as demanding as it is in strong winds. Going backwards is slow, if you really want to win this race you are going to have to be good at kedging!”

Even Ken Read, skipper of Jim Clark and Kristy Hinze Clark’s 100ft Comanche, technically the fastest monohull in the race and least likely to kedge, agreed: “I have never anchored more in my life than in this race! We have all visited Portland Bill a few times as a group.”

Ian Walker, whose VO70 Abu Dhabi Ocean Racing which set the present monohull race record in 2011 had been in contact: “He said, ‘just to remind you there is another isobar approximately in Iceland’. Ian is feeling safe about his record right now,” Read continued. “I don’t think any of us do very well in absolutely no wind, but we all have to play the same game. Whatever the breeze is we just have to adapt. Certainly dragging around a boat with an 7+ m beam in very light air is no fun.”

Read observed that Comanche only needs five knots of breeze (if there is flat water) to get going. The same is true of the multihulls taking part where the three MOD 70s and the 80ft trimaran Prince de Bretagne will be chasing the world’s fastest offshore boat, Dona Bertarelli and Yann Guichard’s 40m Spindrift 2. Newest to the 70ft trimaran class is Concise, who’s young skipper Ned Collier Wakefield admitted: “Looking at the forecast we are trying to work out how to kedge the thing: If you are a 70ft boat or 32ft boat in no wind, it doesn’t really matter – you still go the same speed. We have to keep her trucking. We might have some breeze later on and a little bit of sea breeze gets us going – we’re up into the 20s if we have 10-12 knots of breeze.”

One team not looking forward to the forecast is the brand new IMOCA Ocean Masters 60 footer Safran, sailed by Morgan Lagraviere and Nicolas Lunven. She and Armel le Cleac’h’s Banque Populaire feature radical new L-shaped side foils, designed both to prevent leeward and provide vertical lift, reducing wetted surface area. Lagraviere admits that the foils have been effective, but only reaching in moderate to strong winds: “I’m not sure this year’s Fastnet will be for us. We will try to do our best. It will be very interesting learning how to use this new boat with the foils and to race with other IMOCA boats, especially Banque Populaire.”

In addition to the IMOCA Ocean Masters 60s, 59 boats in the IRC fleet are also sailing doublehanded. Lowest rated is Lucinda Allaway and Tom Barker’s Contessa 32, Hurrying Angel. Their Rolex Fastnet Race will certainly be long, but could favour their slower, lower rated boat on handicap.

Allaway’s personal objective is to reach Plymouth in time for the party celebrating the 90th anniversary of the race. “In the last ten years, no Contessa has made it in for the Friday night party, so that is our aim, although we have catered until Sunday.”

A slightly different battle is between the S&S classic yawls of the 1930s and 1940s: Matt Brooks’ 52ft, Dorade (Fastnet Race winner in 1931 and 1933 in the hands of her skipper/designer Olin Stephens), Christopher Spray’s 53, Stormy Weather (winner in 1935) and the 57ft Argyll of Welsh comedian Griff Rhys Jones.

The boats have done battle previously, but the Rolex Fastnet Race is their most ambitious race. For Brooks this is the last event is a series Dorade has done emulating Dorade’s 1930s successes. “We are pleased because just four years ago, anyone we talked to said it was impossible and thought it was crazy,” he said.

Griff Rhys Jones was hoping for a stronger wind Fastnet for his boat to stand a chance in the ‘yawl-off’. “If it blows up we win. If it gets quiet then Dorade wins. But if we get out of the Solent, we’ll be lucky!” Personally Jones has only been sailing for 10 years, has owned Argyll for five and been racing for even less. “Our boats have to be completely authentic – there is not one shred of carbon fibre. All the spars are wooden. Our spinnaker pole takes three people to lift up into place! We sail pretty much in original form.”

The largest fleet in the race is the Class40, with 22 boats competing. Spain’s Gonzalo Botin, whose famous yacht designer brother Marcellino conceived his boat, Tales, came close to winning in 2013. “Class40 is a marvellous offshore class, always very competitive. In most races there are 15-20 boats and maybe ten can win. That is the case this time around and with the weather it opens up the game even more.”

Also racing a 40 footer, the Beneteau First 40 La Réponse, is Admiral of the RORC Andrew McIrvine, a competitor typical of the bulk of the race’s giant fleet, for whom the Fastnet is the height of his annual racing calendar. For McIrvine, the IRC race among the 40 footers is a competitive one. “There are a whole bunch of First 40s and 40.7s and the Australians have come over who won the Rolex Sydney Hobarts in the same boat – we beat them by six minutes on corrected time last time. There are some very close battles within this fleet and you always tend to race the boats that you know and are similar.”

Michael Boyd, Commodore of the RORC concluded: “We are delighted that this is a record year and by the quality of the competition. There are a lot of fantastic sailors, who have put their effort, energy and money to be with us for this special race. We wish you all a very successful race and a safe passage.”