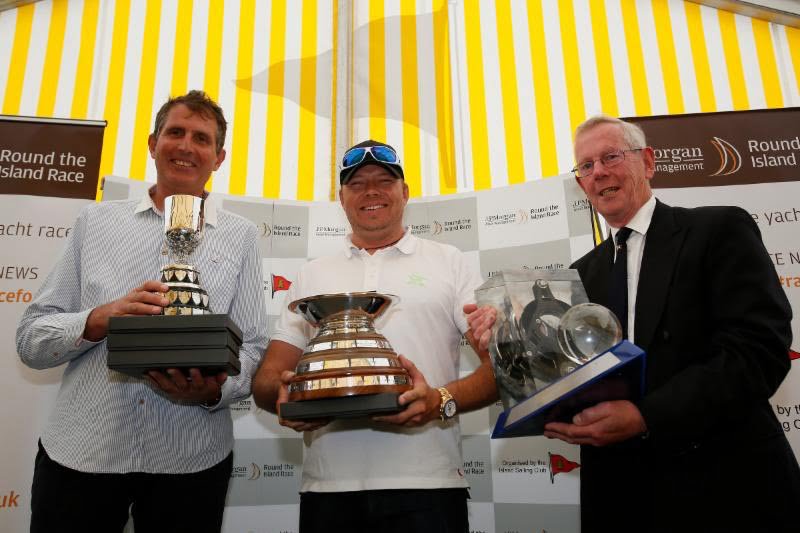 In a fast-paced and action-packed day that started at a later than usual 0830 with the firing of the first gun by HRH Prince Michael of Kent GCVO, Sir Keith Mills’ FAST 40+ Invictus missed out on winning the coveted Gold Roman Bowl for the first IRC yacht on corrected time, having to settle for second place. His crew included Invictus Games competitor Zoe Williams, as well as Prince Harry, following a long-standing invitation to compete in the Race this year.

The main prize instead went to Bernard Langley’s TP52 Gladiator, which powered around the course to become the second monohull to finish, crossing the line less than four and a half hours after the start.

The biggest news, however, was reserved for Lloyd Thornburg’s giant MOD70 trimaran Phaedo^3, which tore round the course in two hours 23 minutes and 23 seconds. In doing so he smashed the record time Sir Ben Ainslie set in 2013 by a stunning 28 minutes.

Despite the unusually testing conditions, only a small percentage of the fleet retired from the race, with the overwhelming majority of competitors – some of whom saw gusts to almost 40 knots – successfully completing the course. By 2100 there were only a handful of the back markers left on the final few miles of the race course. The only prize that was still open before the finish deadline of 2230 was the Tenacity Trophy for last boat to cross the line within the time limit!

All that record-breaking excitement on the water ensured that today’s Prizegiving at the Island Sailing Club – the last to be held with a J.P. Morgan Asset Management backdrop – attracted a huge audience for the hour-long presentation of Gold and Silverware.

In the welcome and introduction to the Prizegiving by Vice Commodore Peter Bingham and Race PRO Mike Peskett, generous tributes were paid to numerous ISC teams, many comprised of the 100 or so volunteers that work so hard for the sheer love of the Race, every year. Thanks also went to the Race sponsor and partners and finally the competitors who participated in this 12th and final year of what has been a fantastic partnership.

Supported by the ISC’s Flag Officers and today’s VIP guest, the record-breaking yachtsman Brian Thompson (and co-helm of Phaedo^3!), Sailing Secretary Chris Thomas got the Prizegiving off to a flying start and kept a rattling pace going throughout.

When asked for his take on this 80th Race in its 85th Anniversary year, ISC Sailing Flag and head of the ISC Race Management team, Dave Atkinson, said:

“It’s been more of a challenge this year than we have had in recent years. The heavy weather forced us into making some pretty major decisions in cancelling some classes but we feel that with safety always being paramount, we were entirely justified in doing what we did. There are a few sad faces but many more happy ones. We act as we do with the information that we have and at the end of the day I think it has been an incredibly successful weekend.”

TENACITY TROPHY – Last boat to finish within the time limit

All the Results and Trophy Winners are online on the Race website: at rtir.me/results