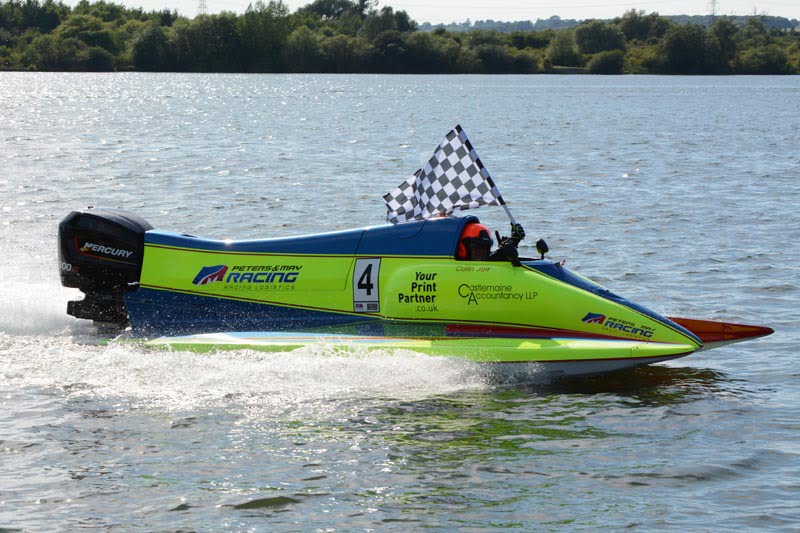 This weekend (1/2 August) over 30 competitors headed to Stewartby Powerboat and Hydroplane Club in Bedford for the annual Powerboat GP RYA Sprint championship which saw 5 classes battle for glory over the 2 day championship weekend.

First to take to the water was the GT30 class providing fast and furious action in what was deemed one of the closest contests of the weekend. After qualifying, with less than a second separating the top 3 boats the battle was set to be intense. With the results for qualifying in, it was Lowestoft’s Luke Hugman that had finally edged Kent’s Ben Jelf off pole position.

From pole, Hugman was in control and as they headed in to the first corner neck and neck, he used the inside line to round the turn first and keep Jelf in his wake, with Jelf trying at every turn to pass him but Hugman held him off to take the first heat win.

Heat 2 had all the competitors pushing hard, and Jelf only had one goal reclaiming the top spot. Once again Hugman and Jelf went into the first turn neck and neck with nothing separating them as they headed to the bottom mark Jelf took the outside line and edged ahead, once in front he manoeuvred throughout the race to keep Luke at bay. Meanwhile pushing hard for the third spot it all fell apart for Jamie Norris as he barrel rolled out of heat 2 and went for an early bath. Disaster also struck for Bexley Nunn as whilst pushing hard to catch the front pair, one of his engine mounts broke and he was forced to limp back to the pits.

With one heat win each all eyes were going to be on heat 3, Jamie Norris and Bexley Nunn worked hard throughout the lunch break try to make the start line but as the boats lined up for the start Bexley was a noticeable absence. Back on pole Jelf was determined to chase his 10th British title. Shaking hands before the start the battle was on!  Once more they headed into the first turn together but using that pole advantage Jelf pulled ahead, despite a valiant effort to catch him, Hugman was forced to settle for second as Ben Jelf (15, Maidstone) secured the 2015 Powerboat GP GT30 RYA Sprint Title.

Next up were the T850’s Matt Wood and Nigel Edwards have both been on flying form but the rest of the fleet were going to have something to say about it. Heading into qualifying it was reigning T850 Sprint Champion Bill Owen that set pole position with Bedford’s very own Nigel Edwards in 2nd less than a second behind him. Matt Wood managed to secure third on the grid before barrel rolling himself out of the session and leaving himself with lots of work to do to make the first heat.

With his boat and engine dried out Matt Wood lined up with his fellow competitors for the start of heat 1. Seasoned racer Bill Owen now on pole was going to make it extremely difficult for any of his fellow competitors to pass him and as they headed into the top turn he had a clear lead on the fleet. Matt Wood also got a flyer and took second in the first heat forcing Dave James to settle for third.

Heat 2 saw Bill Owen once again use his pole position to his full advantage taking the lead into the first turn once again and leading all the way to the chequered flag. A battle ensued between Matt Wood and Nigel Edwards for second place but following an infringement on the start Wood was docked a lap and Edwards claimed second.

With the title almost in bag from Mr Bill and him in fine form all eyes were on the last heat to see who would take the 2nd and 3rd championship podium places. Another second place finish for Matt Wood and a third place for Nigel Edwards in the final heat saw them take the final podium places respectively as the 2015 Powerboat GP T850 Championship Title was awarded to Lancashire’s Bill Owen.

The next class up were the F4 Catamarans where Lancashire’s Ben Morse and Southampton’s Sam Whittle were set to go head to head for the championship title. Morse secured pole position but Sam was right behind him with less than half a second separating the two of them.

As they headed off the start line there was little separating Morse and Whittle with former F4 World Champion Mark Williams hot on their wake. Morse rounded the turn first and held Sam at bay to take the first heat win.

Heading into heat 2 again they were neck and neck off the line heading round the first turn in perfect synchronisation but once round the first turn, Morse once more started to edge away, Whittle fought hard to catch him but Morse managed to secure the second heat win. Further back in the fleet, Natalie Craddock and Sunderland’s Jordan Muckles ensued on a thrilling battle for the fourth place behind Williams in third.

F4 heat 3 and the two front runners once more went parallel off the start line as they rounded the first turn Whittle had the edge but heading into the timing turn Morse took the inside line forcing Whittle to take a wider turn and Morse once more had the lead.

With the top three finishers in each heat not swapping positions the podium was set Mark Williams took the Bronze medal, Sam Whittle secured the silver and for the second consecutive year the Powerboat GP British F4 Sprint Champion was Lancashire’s Ben Morse.

Next in action was the OSY400 hydroplanes with 5 teams lining up to battle for the 2015  Sprint title including newcomer Marvyn Godfrey from Lowestoft. Two of the GT30 racers Luke Hugman and Bexley Nunn were back in action in the OSY class and both looking to make podium finishes.

Qualifying saw nothing separating adversaries Jamie Marr and Luke Hugman as they both set a lap time of 49.28 seconds with pole position awarded to Hugman for setting it first. However heading into the first heat there was a problem with the hull Luke had been using and he was forced to swap hulls meaning he would need to start at the back of the grid.

Unfazed and with a job to do Hugman got a storming start beating Jamie Marr into the first turn despite his new pole position advantage. With gusting winds the whole fleet had to keep their wits about them with even the slightest mistake likely to see them crash out of the championship.

Two clean heat wins for Hugman and it looked like he was set to secure the championship title. Heading into the third heat he went head to head with Jamie Marr into the first turn with Jason Mantripp hot on their wake, but Hugman pulled away into the lead but the heat was to be restarted as newcomer Marvyn Godfrey collided with a turn buoy and decided to take it on a tour of the lake.

The GT15 class saw three new junior racers joining the fleet of 9 to 16 year olds all looking to become RYA| Sprint champion. Just 1mph separated Lowestoft’s Thomas Mantripp and Jonathan Brewer in qualification but it was to be enough for Thomas to take pole position and keep Jonathan at bay. In flawless focus Thomas Mantripp kept his cool and dominated all three heats to secure himself the 2015 Powerboat GP GT15 RYA Sprint Title. With Jonathan Brewer also putting in a strong performance to take second in all three heats and the silver podium spot.

This left it down for the other youngsters to battle it out for the bronze medal position with Elliot Fleet plagued with problems all weekend it went down to Tiegen Goodfellow and George Elmore to do battle. Heading into the final heat only 2 points separated the youngsters and George Elmore just needed to beat Tiegen to claim his first ever podium finish. As the start lights went out, George flew away from the start and with some fantastic cornering he took a third place finish behind Mantripp and Brewer and completed the Championship podium.

The final Powerboat GP British Sprint title to be contended for was in the F2 Catamarans at speeds of around 120mph, points would be even more important as they would also count towards the British Overall Championship. Following on from recent form Steve Hoult flew into qualification taking pole position but with less than a second between the top three it was going to be a fiercely fought battle.

Heat 1 saw the F2s roar away from the start line but it wasn’t Hoult in the lead it was Stewartby’s own Colin Jelf who had started the grid in third place that came round the turn first albeit Hoult and reigning champion Paul Balfour were hot on his heels. With clean water ahead Jelf focussed on the task ahead and soon began picking off the back markers as the battle continued behind him trying to pass one of the slower boats Balfour and Hoult collided rounding the turn mark and Hoult barrel rolled out of the competition. The race was red flagged but with minimum lap requirement completed the race result was called.

Steve Hoult’s team worked tirelessly throughout the night but couldn’t get his boat finished to make the second heat, where from pole position Colin Jelf once more led the way into the first turn mark and from there soared into a second heat win. Alan Marshall and Paul Balfour battled it out for the second place position throughout the race with Paul just edging Marshall into third.

Jelf again got a flying start in heat 3 leading the way to the Powerboat GP British F2 Sprint title seven years after he last secured the title. But the excitement wasn’t over yet Hoult had managed to get his boat back on the water in a valiant effort to claim valuable championship points. But whilst Hoult was happy to be back in the running it was Marshall and Balfour that

were now battling hard to fight for the final podium positions. A collision between the two saw Balfour damage the front section of his boat but unaware of any damage he continued to battle with Marshall for the whole 12 lap race.

Powerboat GP promoter Jason Brewer had this to say about the weekends action “It really was a weekend of complete thrills and spills there’s been some awesome racing and some valiant champions crowned.”

He continued “It was a very busy weekend on and off the water for lots of the teams but the real winner this weekend was the sportsmanship that was shown amongst the teams to help each other and get all the racers back on the water.”