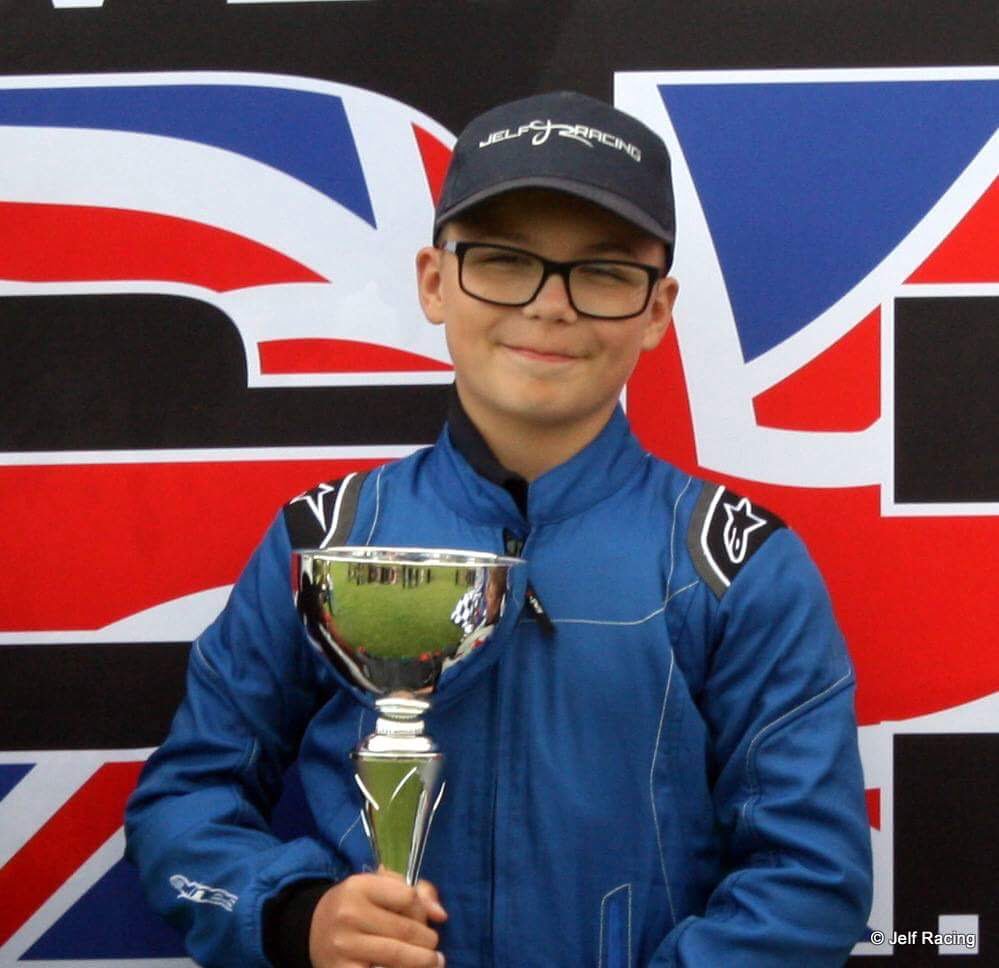 The Jelf Racing team last weekend (5/6 August) travelled to Stewartby, Bedford for the 2017 Powerboat GP RYA British Sprint Championships in a bid to fight for 5 British championship titles. The Kent based powerboat racing team made the journey to battle it out at a stand alone event that would see seven British Powerboat racing champions crowned over the course of the weekends action.

First in action for the Jelf racing team was 12 year old George Elmore of Chatham who has been on exceptional form this season and heading into the weekend had only one goal in sight, becoming British Sprint champion. Focused on the task ahead the youngster quickly set about business as he claimed pole position in qualifying and setting himself up for a strong start throughout the weekend. From pole position George had set with self up for a fantastic weekend with just 3 races standing and his fellow racers standing between him and the championship crown.

Heading into battle against George was club mate Aidan Fleet and Ethan Goodfellow, all three juniors were looking for their first Championship title and were going to battle hard to claim it. George got quickly down to business getting a flying start in heat 1 and secured his first win taking the chequered flag with a comfortable lead ahead of his peers. Heat 2 and George once more got a fantastic start and flew home to take his second win and we’ll on the way to taking his first British crown.

A deteriorating weather front saw heat three put on hold in hopes of the wind dropping. The weather failed to improve but with two heats already in the bag George claimed the podium top spot and with it his first British GT15 Sprint championship in a fantastic performance from the youngster.

Next in action was Jelf Racing’s GT30 driver Jonathan Brewer in high confidence following a Grand Prix win at Chasewater Jono was set to bring silverware home for the team the only question between him and fierce rival Thomas Mantripp was who would claim gold no who would secure silver. Jono got quickly down to business and although very little separated them Jonathan managed to steal the all important pole position from Mantripp and was focussed on claiming a podium position.

Heat 1 and Jonathan and Thomas got a blistering start from the rest of the field no battled hard throughout the 8 lap race to see who would claim the domination in the first heat. As the chequered flag was waved Jonathan claimed the win leaving Thomas to settle for second and an immense battle between the two youngsters to follow.

The second heat saw them once more power away from the start line with Jono just edging ahead of Thomas but as he rounded the first turn mark Jono’s engine cut out leaving the Thomas to claim the heat and win and the rest of the fleet pass him. Brewer fought hard to battle his way back into the heat moving his way backs up to second and leaving the battle to be decided on the final heat of the weekend. With the weather against them. The results for the two heats were declared and despite his pole position Thomas Mantripp had secured a faster lap time just edging Jonathan into the silver medal position.

The third racer in action for the team was local man Nigel Edwards, the ex Hydroplane champion has over the past previous couple of seasons swapped his 0350 hydroplane for the T850 monohull class and a completely different style of racing. Nigel would be the first to admit that securing the T850 crown was going to be be a challenge of epic proportions as rival, veteran racer Bill Owen has been in fantastic form and vying for his 10th British championship title stopping Owen was going to take every extra skill and speed Edwards could muster.

Nigel headed into qualification determined to battle Bill every inch of the course in a bid to claim more silverware for the Jelf racing team. Despite his best efforts Nigel couldn’t quite catch Bill Owen and had to settle for second place on the starting grid but focussed he wasn’t quite ready to give up the fight.

Nigel got great start in Heat 1 but the vital pole position for Bill was just to much of an advantage for Nigel to catch as Bill looked set to claim his 10th championship title. Unfortunately Nigel’s campaign ended there as worsening conditions saw the final two races of the weekend cancelled, meaning Nigel Edwards secured the Silver T850 Sprint championship medal.

Ben Jelf was back in action in his F4 catamaran and following, a Grand Prix win at the previous event, he was ready to Challenge Ben Morse for the British Sprint title. Both racers boast over a dozen titles to each of their careers so were set for an awesome battle for the Sprint title.

Jelf knew he had his work cut out for him during qualification as 4 weeks previous At the World championship round Morse had set some very fast times, but jelf wasn’t phased knowing every outing in his new hull was seeing him gaining speed and confidence.

Morse just had the edge on Jelf during qualification with less than half a second separating the two of them and then a two second gap to the fastest chaser. Despite Morse having claimed pole `Ben was aware that a good start could see him head to head into the first turn and heading towards his first British catamaran title. Morse got a flying start and despite his best efforts Jelf just couldn’t catch him in heat 1. Heat 2 saw them both power away from the start with Morse once more in the lead but the race was red flagged and curtailed following a collision between to boats meaning Jelf was forced to settle for the Silver medal, with Ben Morse claiming the crown.

The highlight for the team however came in the form of a return to racing for Team manager Colin Jelf. Just 4 weeks after a serious collision in the F4 World championship round at Stewartby Jelf had fought hard to recover and make a welcome return to race fitness.

Back on the water the team knew it wouldn’t be long before the former World champion would make a return to winning ways calm and collected he headed out for qualifying. Slowly gathering speed and momentum Colin Jelf made his way around the course building speed with each lap, by his 16th lap he had set the fastest lap of the session and despite being only a fifth of a second behind him championship rival Paul Balfour couldn’t find the extra speed he needed to catch him.

Colin was back and looking strong in qualifying but when it came to heat 1 his engine became plagued with problems leaving him forced to settle for 4th position.  The team worked hard to find and fix the problem but with racing curtailed due to bad weather a fantastic comeback in qualifying and fourth would have to do.

Catching up with Ben following the racing he had this to say about the team’s performance “We all fought really hard to secure the places we did today. George drove really well and it’s great to see him finally secure a British Title, he’s a great little racer and takes on board any advice the team give him and has really improved as a driver, he really deserves this for all his hard work. Jono did great to work his way back up to second after his engine cut out and for Nigel and I unfortunately the weather was against us so we’ll just have to come back fighting harder next time.”

He continued “We’re all really happy with our silverware and super proud of George but the highlight for us all was seeing my Dad back out on the water and in front in qualifying where he belongs it’s been a very difficult few weeks for all the team but we’re stronger together. We’ll celebrate these results and quickly be back to focussing on our next challenge.”