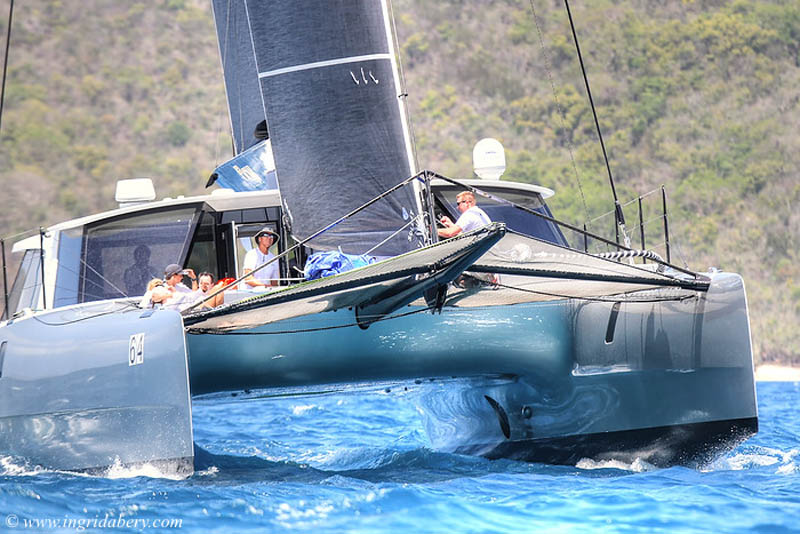 Always offering up something new and different, the BVI Spring Regatta and Sailing Festival 2017 is pleased to welcome the C&C 30 Sportboat and Gunboat fleets to this year’s event which kicks off on Monday with registration at noon and opening party at 6pm. Tuesday March 28th brings on the Round Tortola Race, a 31-nautical mile race around the beautiful island of Tortola for the Nanny Cay Cup – a challenge for the fastest mono and catamaran record around the island. Wednesday is another opportunity for crews to warm up before the weekend’s racing, with the Scrub Island Invitational Race starting from Nanny Cay, hosts of the BVI Spring Regatta since 2002.

Mann is sailing a new boat with a crew relatively new to the boat. He’s using the BVI Spring Regatta and this season’s Caribbean regattas as a chance to train for the US summer C&C 30 class events. He said, “We’re focusing on the Caribbean regattas for skill building: at this point we’re pretty confident in our modes in mid to heavy air, but if we happen to have light breeze at the regatta, we’ll use it as a good opportunity to do some more light air training in which we’re not as experienced.”

“It’s our second season of doing Caribbean regattas and the BVI Spring Regatta attracted us as being a good event to take part in alongside other Caribbean events,” Cucciaro said. Cucciaro, a former member of the US Olympic yacht racing team in the 470, became a national class champion in 1978 and won gold at the 1979 Pan American Games.

While it’s exciting to have new fast boats in the 2017 Spring Regatta and Sailing Festival fleet, it’s also gratifying to welcome back The Blue Peter. Launched in 1930, Matt Barker’s beautiful Alfred Mylne-designed classic yacht is the oldest boat racing in the Sailing Festival. She last raced in the regatta in 2015.

Boats and crews from 17+ countries make BVI Spring Regatta a colorful international event, including entries from neighboring Caribbean islands – Antigua, Jamaica, Puerto Rico, St Maarten and St Thomas. The smallest multihull of the event, the 23-foot Newick trimaran Piglet is a long-time Regatta favorite, having raced the event since 2001. 75-year old owner and outgoing St Croix yacht club commodore, Joe San Martin has been sailing trimarans in the Caribbean since 1987, ever since he was first introduced to multihulls by his wife.

With a truly international crew from New Zealand, the US, the USVI, Australia, and the UK, Peter Corr returns to this year’s event with the King 40, Blitz. Corr competed in as the Corrs Light Racing team in 2016, having competed each year since 2013 when they first raced on Corr’s Alia 82, smashing the monohull record that year by nearly half an hour in the Round Tortola Race winning the Nanny Cay Cup.

Blitz boat captain David Sampson said, “We’re hoping to better our 2nd place in CSA-Racing 2 from last year. We have the same crew as in previous years and will be trying hard! This is just a great event.”