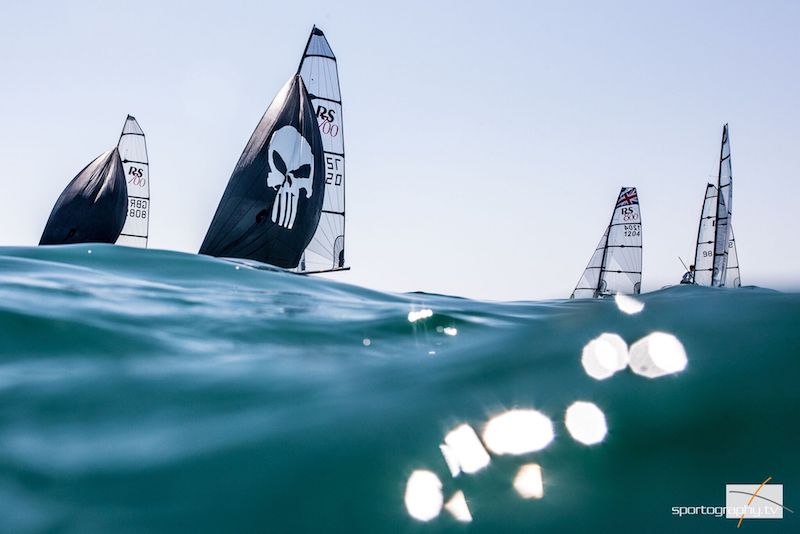 According to Mark Rushall (June “Yachts and Yachting”) Hayling Island Sailing Club is a venue sailors seem to love or hate.  Probably loved by HISC members but the strong tides, sand banks, the waiting for the wind to arrive and the long queues getting off the island are aspects just about tolerated by visitors.

But, Aristotle famously said after his visit to Hayling Island Sailing Club “The whole is greater than the sum of its parts”, and so it is.  The reason why over 200 boats, more than 300 sailors (across all the RS classes) and probably over 400 people in total came to the 2017 RS Sailing Summer Championships is because an event at HISC is always a memorable one for all the right reasons.

The RS700s shared the same course area with the RS200s, the RS400s and the RS800s.   The RO did a great job of managing so many boats on what was a light wind enforced smallish course area.  But race management, managing your way around the other fleets would be an important aspect of the tactical considerations.

The overall race results tell one story: that the event was all but one race short of a white wash for Jerry Wales sailing the first of the new upgraded RS700s to hit the water.  He won 5 of the 6 races.  A satnav error (or was it early onset Alzheimer’s, to be honest I don’t remember) told him to head for the leeward gate/finish being used by the RS200s and RS400s on the outer loop while in the lead of race four.   That turned out not to be the shortest way to the RS700 finish and dropped to 4th.

The blow by blow analysis of the racing tells another story.   As forecasted we were blessed with an 8 to 12 knot gently oscillating Southerly wind on Saturday combined with glorious sunshine, conditions to give the lighter and less lighter sailors a chance of success.

The first beat of each race was even more critical than it would normally be.  It was the only part of each race that our tactics did not need to consider the other fleets (until the approach to the first mark).

The key feature of race one was a dominant left shift about a minute after the start.  Those who could tack off onto port spent the best part of the first beat being lifted up to the first mark.  Those who carried on a little longer on starboard found themselves on a port lay line that had them approaching the mark under a wall of RS400s with their spinnakers up – slow.  Wales was one of those who tacked off on the left shift and led 2013 National Champion Robbie Bell and Colin Dacey round the first mark.   From then on it paid to ignore the shifts and head hard right.  Generally, it paid to overstand the starboard lay line to guarantee a lane clear of the RS400s.   With few passing lanes available the top three finished in the order they rounded the first mark.

Race two and a left shift just before the start allowed Robbie Bell to pull off a very classy port tack start and had a healthy lead at the top mark.   Being that much closer to the back end of the RS400 fleet his rounding of the leeward mark and the first part of the second beat was compromised which let Wales take the lead.   Demonstrating the importance of a clear lane rather than optimising the shifts, Bell tacked off early, into the disturbed air of the RS400s which let Wales lead round the top mark and allow Colin Dacey through as well.  The race finished in that order.

No wind and an hour’s postponement on Sunday (it’s Hayling!).   Will they, won’t they?  They did (send us out).  A crawl out to the race area on the last of the ebbing tide and a further wait for a stable wind.

It arrived: just.   A stable 5/6 knot breeze allowed three good races, if those conditions were to your liking.   The pattern of the racing followed that of Saturday.  Pick the shifts up the first beat and then hard left to stay clear of the other fleets.

The conditions were to the liking of the blue hulled upgraded RS700 of Jerry Wales who led most of the way round the day’s three races (with the exception of the navigation error).

The day’s top sailor was Stephen Hermanson who showed great class and boat speed to post three second places.  The lighter condition clearly to his liking.   Not though to Robbie Bell who slipped down the order posting a 5th, 10th and a DNF.

Pete Purkiss picked up the race win in the first race of the day (race 4) and a very consistent series elevated him to second overall.

Colin Dacey who was always on the money just pipped Robbie Bell for third overall.

All the racing was started under the U flag which meant no individual recalls.  In the absence of any general recalls, there were no recall signals on any of the 24 starts (4 classes, 6 races), how weird was that!   If you had strayed over in the last minute you were probably blissfully ignorant until you saw the day’s results (or read the board on the back of the committee boat).  I am not sure which is worse thinking you might be over (and you’re not) or having no idea (and you were).

A big thank you to HISC for a really good event, to the club members for allowing us to overrun your club for the weekend and to RS for their event sponsorship (and some great boats).

Thanks, are also due to Emma McEwen (of RS800 fame) for the hand-crafted event bowl prizes.  It’s the little things done with love that make such a difference.

The highlight for me was actually seeing Martin Wadhams doing something useful (I’d heard it sometimes happened) doing a fantastic job helping us pull our boats across the sand.  Proper RS support.

Next event the Europeans in the Czech Republic.