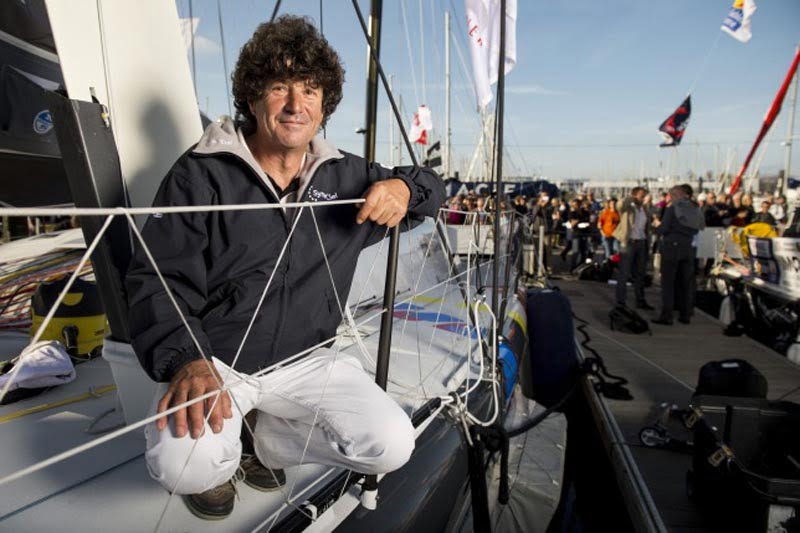 Winner of the last two double-handed races in the IMOCA class, the Transat Jacques Vabre and the Barcelona World Race, Jean Le Cam also has high ambitions sailing solo and intends to compete for the fourth successive time in the Vendée Globe.And he isn’t just planning to be there to make up the numbers… He has just begun his search for sponsors, so we met up with King Jean to find out more.

In spite of a long list of sailing successes, this year’s Barcelona World Race was your first round the world victory…

Jean Le Cam: “Yes, this was my fifth round the world race, three of which I completed, including two Vendée Globe races (2nd in 2004/2005 and 5th in 2012/2013, editor’s note). In spite of all my experience, I had never won one before. But now I have done it! Sailing around the world is always an adventure, an exceptional experience. Completing the race is already a success in itself, so winning… It’s extremely pleasing, as it has enabled me to put behind me my dismasting and retiring from the 2010-2011 Barcelona World Race. For this race, the project with Bernard Stamm was set up late on, so we didn’t have much time to prepare. The rest was certainly not smooth sailing all the way, as we had quite a few technical problems and the duo on Neutrogena (Guillermo Altadill and José Muñoz) kept up there right behind us for quite some time. Given these conditions, it’s always a pleasure to win.”

It was also a first for you sailing with Bernard Stamm. Was this an enriching experience?

JLC: “What’s interesting about double-handed sailing is that you get to learn from the other person. We complement each other well and our partnership worked well. Together we have quite a lot of experience under our belts… and indeed a lot of upsets too! That helped a lot when we needed to find solutions to our technical problems. Apart from that, we got on well together and never had any big arguments. But that’s something you can’t do either. When you set out around the world on a boat for three months, you can’t sit in your corner sulking.”

“The best preparation for the Vendée Globe”

So, you have now begun to look for sponsors for the next Vendée Globe. This win in the Barcelona World Race, coming after your victory in the 2013 Transat Jacques Vabre must be a great help.

JLC: “It should be. In terms of racing, a double-handed IMOCA round the world race is the best way to prepare for the Vendée Globe. But you lose out at the same time, as when you are out there sailing around the world for three months, the others are making progress in finding sponsors and getting their hands on boats. If you’re not there, you certainly miss out on some opportunities… After completing the round the world race it isn’t easy getting back into the swing of things and setting out on your search. But I don’t have the choice. With just eighteen months to go to the start, the clock is ticking. Now is the time to get a project up and running. I’m just starting to look and the first major step will be getting a boat.”

Do you aim to get your hands on the 60-foot boat you sailed in the Barcelona, a Farr designed boat from 2007?

JLC: “Yes, I do. I know her well and know how to fine-tune her. It’s not everyone, who manages to sail around the world double-handed aboard a boat that they will then sail in the Vendée Globe. This 60-foot boat is a safe bet. She is reliable and is still competitive. She was one of the best IMOCAs launched in 2007 and has already won the Vendée Globe, when she was in the hands of Michel Desjoyeaux in 2008/2009. To get to know her even better, I shall be taking her back to Brittany from Barcelona with a crew of three or four. Bernard Stamm won’t be on board, as he is training aboard a Diam 24 for the Tour de France sailing race.”

Why do you want to compete for the fourth time in the Vendée Globe?

JLC: “Because I know that I can do it with a strong and solid project. Along with Bernard, we are the only two skippers to have taken part in the Vendée Globe and the Barcelona World Race, one after the other. So we are well prepared for the 2016/2017 race. I want to get back out there too to share my adventures with the public. That’s always one of the enjoyable things about the Vendée Globe.”

If you take part, what will be your aim in the race? To do better than last time (5th)?

JLC: “Yes to do at least as well, as I am aiming for the top five. The Vendée Globe is a fascinating race, as you are constantly racing against someone else. Last time I was battling it out for fifth place with Mike Golding. Winning is one thing, but having a great story to tell is another. If all you aim for is to win, you are likely to be disappointed.”

How do you feel about the new boats?

JLC: “As long as they keep looking at the foils and nothing else, it’s fine by me (laughs). I think that these people with their foils will mean that I can move up a few spots. In my opinion, they won’t have enough time to get these appendages just right by the start of their race. We don’t even know if it will work in a transatlantic race, let alone a round the world voyage…”

You’ll be 57 in the next Vendée Globe. Winning with Bernard Stamm (51) in the Barcelona and Loïck Peyron’s win at the age of 55 in the Rhum makes those in their fifties look good.

JLC: “We’re giving hope back to those who thought they were too old! Our achievements go beyond the world of sailing. This is a great message for the whole of our society”