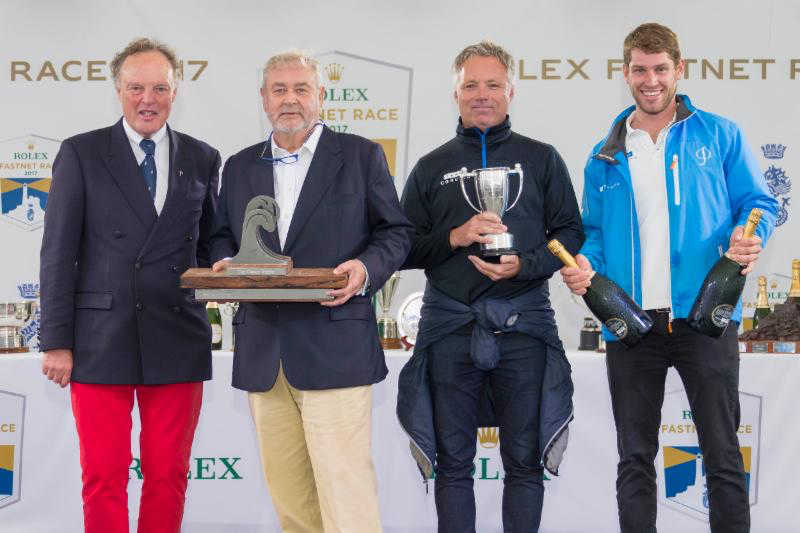 International competitors look back at the 2017 Rolex Fastnet Race

International competitors look back at the 2017 Rolex Fastnet Race

Last Friday night crews braved the elements for a successful prizegiving for the Rolex Fastnet Race and a lively final evening of entertainment at Plymouth Yacht Haven.

Richard Matthews was presented with the Dennis Doyle Memorial Salver as the competing skipper with the greatest number of Rolex Fastnet Race participations. Deb Fish won not only the prize, with Rob Craigie, for having the boat (Bellino) with the top mixed IRC Two Handed crew, but also the Maite de Aramblaza Trophy for the best yacht with a female skipper.

Another Swan that lapped up the uphill beating of the first three days to the rock was Richard Loftus’ 65, Desperado. She was racing this year with the half her crew from Team Israel (which competed in last year’s Brewin Dolphin Commodores’ Cup) alongside other luminaries such as Titch Blatchford and ocean racing legend Paul Standbridge (who first competed in the Whitbread Round the World Race in 1981-2 aboard another Swan 65, Xargo III).

“It was so nice! We saw some of the smaller boats and we were very happy to be on a bigger more comfortable boat,” said Team Israel’s Omer Brand of their passage to the Fastnet Rock in winds of up to 30 knots. “It wasn’t the wind so much as the sea state which was very confused.”

Many of the Israeli crew had never raced offshore before and so were benefitting from the tuition of the renowned British sailors on board. Sadly at this was a serious training exercise, some of the Desperado traditions, such as the black tie dinner at the Fastnet Rock, were dispensed with, however the gorilla Joe Powder was ever present on the transom, as Brand put it: “Watching the crew and making sure we did the job right…”

One of the most intriguing but little known entries in this year’s Rolex Fastnet Race was Bogatyr, campaigned by a Russian crew led by Igor Rytov. To say that Rytov is a ‘keen yachtsman’ would be an understatement. At present he says he races around 200 days a year.

This time on the water has clearly paid off – he is the present leader of the European championship for the highly competitive Melges 20 class. Last year he embarked on an offshore keel boat program too, kicking off in the Mediterranean with the Rolex Middle Sea Race and this summer’s Giraglia Rolex Cup before shipping the boat to the UK for the Rolex Fastnet Race. “It is famous -a 600 mile race, it’s amazing,” said Rytov of the British event.

On the strength of Géry Trentesaux’s Rolex Fastnet Race overall victory in 2015, Rytov wisely purchased a JPK 10.80 sistership to Courrier Du Leon. Despite being relatively new to offshore racing, Rytov, his match racer tactician Konstantin Besputin and his all-Russian crew managed to bring Bogatyr home sixth overall in IRC Three. For this race Rytov said they had made a good start but would have preferred slightly stronger conditions.

The final boat to finish the 2017 Rolex Fastnet Race, German Armin Kammer’s Samoa 48 Odysseus, is due into Plymouth this afternoon.

Nick Elliott, Racing Manager of the Royal Ocean Racing Club said: “It was a fantastic race. It was a tough start with conditions making it challenging, but a superb way to finish with a downwind blast all the way from the Fastnet Rock to Plymouth, where our sponsor Rolex made everyone feel welcome in the Race Village.

Congratulations to Didier Gaudoux and the crew of Lann Ael 2, the worthy winners of the 2017 Rolex Fastnet Race. We very much enjoyed celebrating with them and all the other competitors and winners at our prizegiving party at Plymouth Yacht Haven last night. Thanks to our team of race officers and volunteers, especially the finish and ‘Meet and Greet’ teams who have worked tirelessly to make the arrival as welcoming as possible for everyone.”