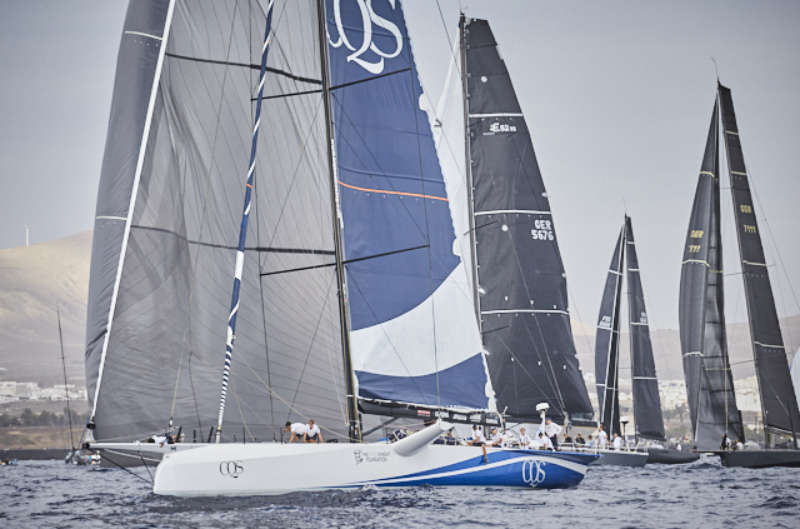 Prior to the start of the 2017 RORC Transatlantic Race you could feel the apprehension amongst the 200 competitors taking part. After months of planning and preparation, it was time for the record fleet of 23 yachts from nine different countries to cast off lines and take on the challenge of the Atlantic Ocean. At noon, the starting gun heralded the beginning of the iconic 3,000 nautical mile race from Marina Lanzarote to Camper & Nicholsons Port Louis Marina, Grenada.

The forecast of fast reaching conditions failed to materialise and despite little breeze, it was a very competitive start. Ludde Ingvall’s 98ft canting keel Maxi CQS made the best of the zephyrs to stretch out an early lead, gybing perfectly on the first of many wind shifts to come. Canadian Southern Wind 96 Sorceress, skippered by Daniel Stump made an impressive start at the Committee Boat end of the line, hoisting their huge gossamer white spinnaker, and Roman Guerra’s Volvo 70 Monster Project showed great pace early on.

The gentle conditions at the start did not last for long. Mike Broughton, navigator on Jens Kellinghusen’s Varuna called the media team as the German Ker 56 was passing La Bocaina, the narrow gap between Lanzarote and Fuerteventura. “There’s buckets of water cascading down the deck with over 20 knots of boat speed power reaching. It is a pretty bumpy ride. We are leaving Lanzarote in our wake and getting ready for the first night at sea.”

RORC Chief Executive Eddie Warden Owen watched the start off Marina Lanzarote and commented: “I think the quality of the fleet is shown by how close they were to the starting line. There is strong competition right through this fleet, with very good sailors and some really exciting boats. It’s the quality of the fleet that counts. I think we are going to have a terrific race. With 23 entries it is great to see the race grow for the 4th edition, I think the word is out that it’s a good race, a proper race. Lanzarote has been a great start location and Calero Marinas have looked after us really, really well. I know competitors will also get a fantastically warm welcome when they arrive at Camper & Nicholsons Port Louis Marina in Grenada.”

José Juan Calero, MD of Calero Marinas was also pleased with the success of the race: “There has been an amazing atmosphere this week at Marina Lanzarote and I would like to think that each year we have been able to improve the experience for participants. Both the calibre of this race and the nature of the challenge, makes it an incredibly attractive choice for sailors who want to race across the Atlantic.”

“Our first challenge was right here on the start line,” commented Palmer. “Instead of the 12kt SE breeze we were expecting, it turned out to be a game of pooh sticks with a very light northerly breeze – we have lost count of the number of gybes already! However, we are proud to be leading IRC Two around the first mark and even more delighted to round it ahead of a Swan 60!”

Five hours into the RORC Transatlantic Race, Ludde Ingvall’s Australian Maxi CSQ was leading on the water by only 9 miles from Varuna, with Marten 72 Aragon, skippered by Jochen Bovenkamp lying 11 miles off the lead.

Individual yachts, classes or the whole fleet can be tracked throughout the race