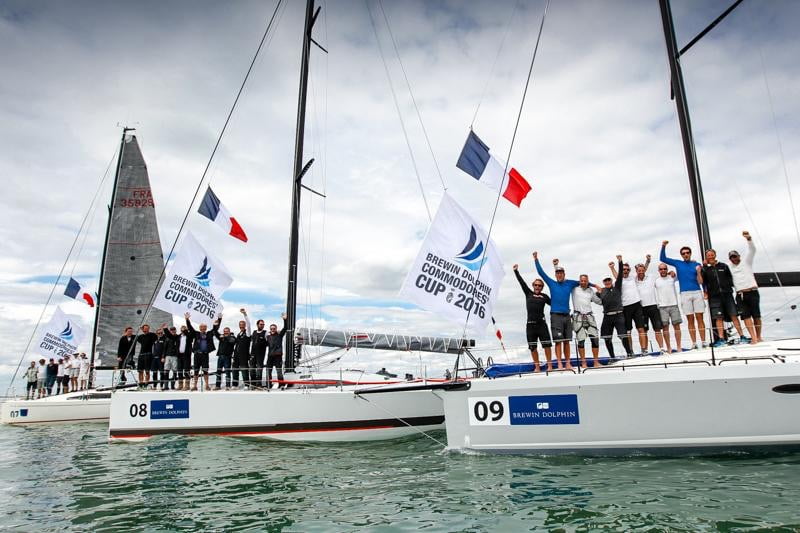 The reason why the Brewin Dolphin Commodores’ Cup stands as a pinnacle event within the Royal Ocean Racing Club’s sizeable calendar was made abundantly evident during its 13th running in late July.

The club’s biennial flagship event for three boat teams with Corinthian crews is a supreme test, held on the navigationally complex waters of the Solent and the Channel, and featuring a range of race courses – windward-leewards, round the cans, an overnight offshore race and a race around the Isle of Wight, that on this occasion took place in sun and a 20-25 knot southwesterly. It is also something of a rarity in modern grand prix yachting – an event that lasts a whole week. And to win requires a team effort: All three boats in each team must pull their weight.

Worthy winner on this occasion was France Blue comprising Eric de Turkheim’s A13,

In an attempt to jump-start big boat racing in their country, Israel made its debut, backed by Desperado owner Richard Loftus. First to announce, they chartered three top British boats – Andrew Williams’ Ker 40 Keronimo, Peter Morton’s JND35 Salvo and David Franck’s JPK 1010 Strait Dealer,  campaigning them with half local and half Israeli crews.

There were also two ‘composite’ teams – Flanders North Sea, featuring one boat from the Netherlands, Belgium and northeast France, and the Celtic Team, led by Scottish adventurer Jock Wishart, comprising two Scottish boats and one from France. Ireland, the defending champion, was unable to muster a team this year, but will return in 2018.

Each team had to nominate its ‘small boat’ (ie with an IRC TCC of 1.000-1.049) which this year got their own starts and results. Not all teams nominated their lowest rated boat for this – notably Marc Alperovitch’s new JPK 1080 Timeline was France Red’s ‘small boat’, while their lowest rated was Jean-Yves Le Goff and Alexandre Korniloff’s A35 Realax.

While recent Brewin Dolphin Commodores’ Cups have coincided with the UK’s ‘week of summer’ bringing light winds, this was not the case this year. Sun and textbook sea breeze occurred most days, on top of the southwesterly gradient wind (notably on the Friday) providing good wind up until the last day.

The event launched into a day of three inshore races, two windward-leewards and one round the cans, in the central-eastern Solent, the wind building until it was gusting to 20+ knots. France Blue, considered favourite going into the event, opened up a small lead at the end of the day, with Cifraline 4 the lowest scoring across the fleet.

Monday and Tuesday were reserved for the ‘offshore race’, designed to be 24 hours long and having a 2.5x points coefficient. This year a sensible course was laid starting from the Royal Yacht Squadron line and taking the boats east to the Royal Sovereign lighthouse south of Bexhill and back west, south of the Isle of Wight, to a finish line northwest of Hurst. In the southwest wind, this proved to be a 150+ mile windward-leeward with the added hurdle of having to avoid the Rampion Wind Farm (south of Shoreham-by-Sea).

Over Wednesday-Thursday, the schedule returned to inshores.

For the first, two races were held and the course area was moved to the western Solent with the race committee boat moored close to the entrance to the Beaulieu river. With a strong flood tide and a brisk southwesterly kicking up a sharp chop, this made for a slightly one-sided race track with most hugging the mainland shore before crossing the Solent to the weather mark and then returning on the tide-favoured starboard gybe.

Moana, in the Flanders North Sea team having to race back to Cowes after their mainsail split while the Henning family’s much modified Mumm 36, Alice, in GBR Red, had to retire from the first race after grounding.

With race wins for Teasing Machine and GOA, France Blue reclaimed the lead overall. However the most consistent performances of the day were among the small boats with Foggy Dew and Tom Kneen’s JPK 1080 Sunrise in GBR Blue, each scoring a win and a second. Sunrise’s second came very close to being a first after she bucked the trend, choosing to short tack up the island rather than the mainland shore.

The two GBR teams were winning occasional races, but were struggling to copy the consistent French. In GBR Red Andrew McIrvine’s First 40, La Réponse had won the opening race of the event, but on the Thursday managed an impressive three OCSes. Meanwhile team mates,

The highlight of the week was Friday’s traditional race around the Isle of Wight. This proved tough from the outset with a stiff southwesterly kicking up the ebb tide, the seastate particularly heinous around the Shingles. Fortunately turning the corner crews were able to hoist kites and were blessed with a reach then a run around the south side of the island in breeze that built to 20+ knots. This enabled a very fast rounding in 5.5-6.5 hours.

With a win for Teasing Machine and a second for Cifraline 4 in the small boats, France Blue at last managed to consolidate its lead. They ended the day on 160 points with a 35.5 lead margin over the second-placed Flanders North Sea, but with the next four teams all within 30 points.

Sadly no racing could be completed on the final day and these positions stood with France Blue claiming the Brewin Dolphin Commodores’ Cup.

“It was a great week with a good variety of courses, windward-leewards, round the cans and the long race which was a bit difficult for the big boats. I think our team did very well. We won four races, GOA was right at the top and Cifraline also. We are very pleased by this.”

“We are very happy because we haven’t won it before. We did our best all week long. We had very good team mates – Teasing Machine is such a machine reaching or when the wind increases and Cifraline, did so well in Class 2.

“It was a strong project with Daniel Andrieu with Eric de Turkheim and Laurent Pages (Teasing Machine’s tactician) – they are very experienced, smart skippers who know how to prepare for all conditions, because this week we got a huge variety of conditions and it was very challenging. There were strong fleets in both classes so it is an honour to write France’s name on the Commodores’ Cup ten years after we last won it.”

Daniel Andrieu was also delighted sailing the event for the first time but having had prior success on the Solent as designer of One Tonner Indulgence, skippered by a young RORC CEO, Eddie Warden Owen, in the British 1989 Admiral’s Cup winning team. Cifraline 4, finished second in the small boat class, only outshone by Noel Racine’s immaculately sailed Foggy Dew.

The surprise result was the second place of Flanders North Sea, that comprised

“We never expected this,” enthused Moana skipper, Francois Goubau, who races with a crew including sons, Laurent and Mathieu.”It is our fourth Brewin Dolphin Commodores’ Cup. Before this our best was fourth in 2012 with Team Benelux. It was perfect with a good team of boats we know well. We come because it has the best organisation and you get to race at a high level, so you can improve.”

Omer Brand, manager of the Israel team was happy with finishing fifth overall in their first Brewin Dolphin Commodores’ Cup:

“We did great. The sailors we brought from Israel learned a lot and they absolutely loved it – they are already looking at ways to come back here next time. We set out to have the first Israeli team in a big event and to try not to make a fool out of ourselves and I think we exceeded that expectation.”

“It was a good experience,” commented Wishart. “It’s worth it and I will think about coming back next time – it’s a great bunch of people, great camaraderie, and I’ve enjoyed being able to introduce new young sailors to this calibre of yachting.”

“It went much better than usual, because until the final day we had wind. We had closer competition – it wasn’t a whitewash, in fact during the week, the points got closer between the teams. The French were the favourites and they did very well, and Flanders North Sea team too. It was great that the Isrealis came. I think they enjoyed it.”

As to Team GBR ending the event in sixth and seventh places respectively, McIrvine added:

“Unfortunately the British performance was a bit lacklustre. I think people are frightened off, because they think it is a much higher level than the racing they’re used to and it is – it is up a big notch up. At the moment, we don’t seem to have the strength and depth the French have.”

The next Commodores’ Cup will take place in 2018. http://commodorescup.rorc.org/