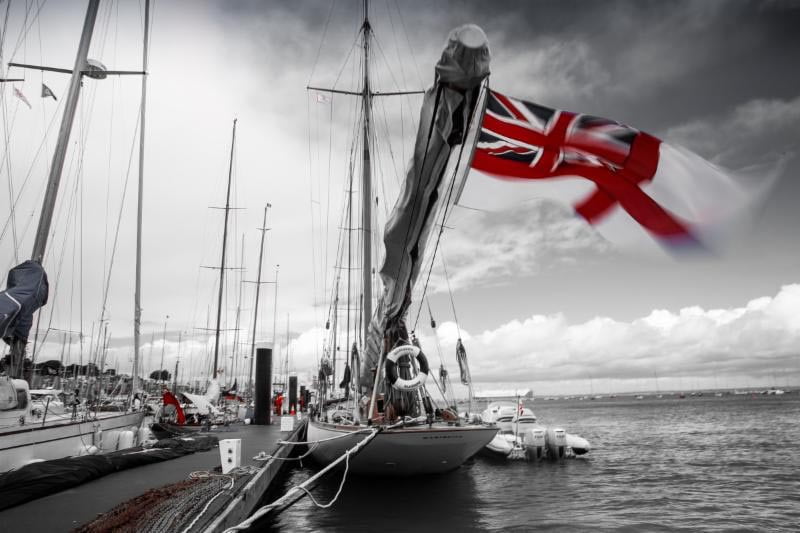 With racing cancelled today on the opening day of the Royal Yacht Squadron’s Bicentenary International Regatta most crews could only stay ashore and watch the white caps of the waves as the Solent did its worst in the wind speeds gusting 30 knots, with the ebb tide kicking up some big seas in the usually sheltered stretch of water.

The J Class had made a collective decision early in the morning to stay ashore and teams around the docks of Cowes moved towards inevitability of racing not taking place.  Principal Race Officer Jonathan Peel made the final call at 1100 announcing “Gusts are continuing to come through and there is nothing to suggest that they will decrease today.”

The starts processes will commence again tomorrow morning.  In the meantime Carina headed out for a look around the Solent with her full crew on board. Carina arrived in the UK from Newport, RI, one of the Transatlantic Race 2015 competitors. “We thought we would go for a sail today,” the owner Rives Potts told us. “Carina is a sturdy boat and has covered many ocean miles. She is probably one of the few yachts here that comfortably handles these conditions.  In fact she can be a lot slower turning around the racing marks than some of our fellow competitors – so we like to stretch our legs on the world’s long races!” Rives Potts, who is also the Commodore of the New York Yacht Club, has done a mile or two. Carina, a McMurdy & Rhodes Sloop, was launched in 1969. She has competed in no less than 21 Newport-Bermuda races, more than any other boat. Most recently she was second in class in the Transatlantic Race 2011, and sailed down under to take part in the Sydney-Hobart Race, going on to complete a circumnavigation.

“We are looking forward to tomorrow’s racing, and hoping for slightly lighter winds,” adds Commodore Potts.

Another visitor to the event, from Germany, is Leu, a 45ft Judel/Vrolijk design, launched in 2008, and winner of many titles. Legendary tactician Albert Schweizer was philosophical about the weather.  “We have a big understanding, of course, of the weather situation. Safety is very important and comes first,” he says. “We are still looking forward to some good days of racing.” Schweizer, a veteran of many Admiral’s Cups, is in Cowes for the first time in 20 years. “We are really happy to be back here in the Mecca of sailing, at Cowes.  It is a huge pleasure.” Leu, like many of the other competitors at the Bicentenary will go on to do the Fastnet Race on 16th August.

Six beautiful 8 metre yachts are on the dock ready to go racing. Alexandre Geoffroy, head of the family who owns Enchantement, says “The decision to cancel is absolutely the right one. These winds are strong for an old lady.  We are only really happy up to about 17 knots, and our best performance is between 12 and 15 knots.” The old lady is indeed of a good vintage – Enchantement was designed and built in 1923 in Norway by Johan Anker, famous for his many victories in all metre classes from 1906 to 1939, and also as designer of the Dragon. She has stayed in French waters since birth.

“Our goal this week would be to beat all the other 8 metres… except Saskia.  She is just too hot!”  Enchantement is an ‘affaire familiale’. Geoffroy sails with his two sons, daughter and nephew as well as other family friends. They sailed the yacht from her home berth in South Brittany, to the Cowes start line, Enchantement’s first visit to the UK.

Further up the river at Shepard’s Wharf marina, the fleet of J70s were race prepared and ready. The young teams of under-30s, three each to a boat, which has to include one lady minimum, will have to wait another day to see who shows up their speed in the first rounds of racing. Like the big boat crews, these guys have come from around the world – USA, Germany, Italy, and there is even a team from Oxford University.

There’s still plenty going on in Cowes. Tonight (Monday), Sir Ben Ainslie, fresh from his victory at the America’s Cup World Series, will be on stage at the Cowes Yacht Haven in North Sails’ ‘History in the Making’ presentation. He will be joined by Jimmy Spithill, Team Oracle’s helm, who he faced in the weekend’s action. Also on stage will be Sam Davies, skipper of the SCA team, recently returned from the Volvo Ocean Race. The event will be chaired by North Sails President, Ken Read.

It is hoped to resume racing tomorrow if conditions permit.