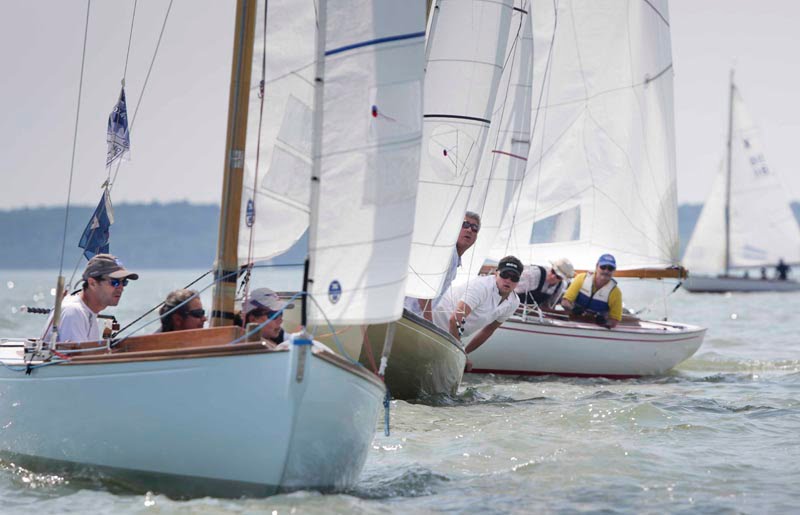 Charles Stanley Cowes Classics Week – Sitting it out on day one

Charles Stanley Cowes Classics Week – Sitting it out on day one

Winds pushing over 30 knots and a choppy Solent sea meant that 188 yachts, all designed before 1975, decided to stay in the safety of their moorings this morning (Monday) on what should have been the opener of the Charles Stanley Cowes Classics Week.  Eight amongst them are more than 100 years old, like Peggy Bawn, launched in 1894, and Old Gaffer Spinaway, only five years younger

However, conditions did not deter five of the larger classics, who took part in a ‘friendly’ race this morning.  “The over-30 foot cruisers were more suited to this morning’s conditions,” reported Race Officer Derek Hodd.  “We kept them close to the shore in calmer waters for a morning race.”  The diehards included two S&S Swans Kiswala and Sheevra, as well as classic cruisers Charm of Rhu and Quailo III and Contessa 26 Thousand Knights III.

For the rest, the race committee made the decision to abandon, since conditions were not suitable for the majority of the classes.  Amongst them are the classic keelboats who would have found the going very wet including the ubiquitous XOD, of which 50 are entered, Vintage Dragons. Flying Fifteens and Six Metres, to name a few.  The Trophy for the day, the Trinity Cup, won last year by Daniel Stephenson’s Damsel, stays on the Club shelf for another year.

Also sitting out the day were the 24 Tempests, who miss the first day of the 2016 Tempest World Championships, which are running concurrently with Charles Stanley Cowes Classics Week.  The two-man high performance trapeze keelboat, which celebrated its 50th birthday last year, was designed by Ian Proctor as the 1965 Olympic Keelboat.  It’s the first time they will be competing at Cowes as a fleet in class history. Yachts and their crews have made the journey from France, Switzerland, Austria, Germany and Ullswater in the Lake District.  “There are a few potential winners to watch,” says Class Captain Michael Adams.  Cornelia Cristen, helming pulce d’acqua two time world champion is looking to repeat her wins, while Christian Spranger and Frank Weigelt are also to watch out for.”

Better weather is expected for the rest of the week which finishes on Friday.  There are plenty of new faces at the annual regatta, now in its eighth year.  The four-strong fleet of vintage Dragons will be entering for the first time and the 8 metres will be joining in after a one year break.  Seven classic S&S Swans this year join the 15-strong Over-30 ft LOA class. Nicholsons, SCODs, Twisters, Contessa 26s and Folkboats join many beautiful one offs, Old Gaffers and the Loch Longs who have travelled from Aldeburgh for the event. The Squib class from the Royal Victoria YC are also racing tomorrow.

XOD Class Captain, Mike Till said, “We are looking forward to the next four days.  Cowes Classic Week is a main fixture in our calendar on a par with Cowes Week.  We are expecting some very competitive sailing with a number of crews as favourites for the podium positions.”

The yachts, representing 30 yacht clubs both in the UK and overseas, will be competing in 18 different classes over a number of race courses. Interest from newcomers continues to grow – at least 35 entrants did not compete last year.

Adding to the excitement of a traditional sailing scene will be the presence of two iconic yachts, Mariquita, the beautiful 38m (125ft) Fife design built in 1911, and Opposition, built in 1971 for the then British Prime Minister Edward Heath as his second Morning Cloud and which went on to win the Admiral’s Cup.   Neither yacht will be racing but Mariquita will be on the water each day with a full crew to show their support to the fleet, and both boats will be open to view after racing as part of Cowes Classics Week.

This year’s event charity is the Miss Isle School of Sip & Puff Sailing – a unique sailing and training experience for physically disabled individuals who want to go sailing but aren’t able to sail a conventional boat. The charity is the brainchild of teenager Natasha Lambert, who has cerebral palsy herself, yet has already sailed around the Isle of Wight, up to the Thames, crossed the Channel, sailed over five hundred miles to Wales, and many other adventures.