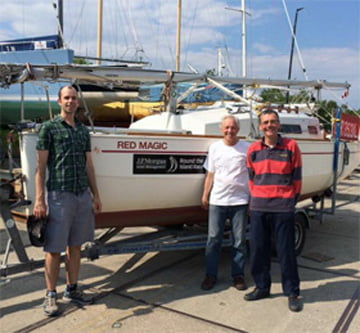 Over the past ten years that J.P. Morgan Asset Management has sponsored the Round the Island Race, more than £600,000 has been raised for charity, a truly fantastic accomplishment by all concerned; and there’s plenty more to come as J.P. Morgan embraces a further two years as the Race title sponsor.

The Ellen MacArthur Cancer Trust has been appointed the official Race Charity through to 2016 and, so far, the Trust has raised over £189,000 through the Race, which has been invaluable in helping it to achieve its three-year plan to double the number of young people in recovery from cancer that it works with by the end of 2016.

This year the Trust is awarding a flag to proudly display on Race day to teams and individuals who have raised over £50.00 for the Trust.  Look out for the five Trust boats on 27th June and give them a wave as you go round! The Trust’s young people will be looking out for the flags so why not get involved and have some fun on Race day. There’s more information about getting involved here: http://rtir.me/charity

Go Team Keech!
Keech Hospice in Luton, Bedfordshire, provided Mark Richardson and his four daughters with a safe and calm environment during the last hours of his wife Jackie’s life in 2014. Mark and Jackie (aged 48) were married for over 25 years.

The expertise and skills of the Hospice nursing team made a devastating situation more bearable and the Richardson family was unanimous in the decision to do everything in their power to raise a sum of £30,000, which will keep one bed funded for one month.

Family friend and Saracens rugby player Hugh Vyvyan challenged Mark to a 10k run, which Mark contra’d with a bid to participate in the 2015 J.P. Morgan Asset Management Round the Island Race. Whilst Mark is new to this type of sailing he has previously served in the Navy for 11 years on HMS Naiad, HMS Bristol and HMS Invincible.

The plan has since evolved and at this year’s RTI, there will be a ‘race within a race’ with no less than eight boats, chartered through Sailing Logic, competing under the Keech Hospice livery, well supported by a host of rugby players from various teams and with the Keech Trophy designed by military artist Ivan Berryman up for grabs! In this World Cup year, the names of the remaining rugby players who are making a play for the Keech Trophy will remain a secret until May!

The appropriately named Mike Keel, chief executive of Keech Hospice Care, is overwhelmed by the scale of the Richardson family challenge, commenting:

“From two people challenging each other to a running race – it became a sailing race – then it was two boats – then five – now eight boats! Then there is the involvement of international rugby stars and other celebrities. The fact that this has moved from an idea to a reality so fast is completely down to Mark and his daughters’ enthusiasm, energy and total commitment to the project.”

As well as the entire Richardson family having a role in the Race both on board and onshore, several of the nurses from Keech Hospice will be participating.

Mark Richardson sums up, “I have to do what I can to help Keech Hospice support those facing the loss of a loved one.”

To date the fund raising through the Go Team Keech Justgiving page has reached over £8,000.
http://www.justgiving.com/teams/GoTeamKeech

David Lewin has been involved with boating and the boating industry since the early 1970s. He is past president of the British Marine Federation, a former member
of the RYA Council and lives with his wife Melanie aboard a houseboat in Burnham-on-Crouch, Essex. David has written a terrific article in the May issue of Practical Boat Owner entitled “Round the Island by Magic” in which he describes the trials, tribulations and joys of preparing his Red Fox 20ft trailer sailer called Red Magic for the 2014 Race. David also takes the reader through his and his crew’s subsequent Race.

David’s article makes for an informative read and will be very useful to anyone who is considering entering the Race but hasn’t quite made up their mind yet as there’s plenty of first-hand advice and tips for newbies. David plans to be back on the start line this year but on something with a little more waterline than his Red Fox. He’s racing with the senior management team from a lifejacket company, over from Germany specifically to compete in the Race on a Bavaria 36 called Melbourne Star.

The young ones
12 year-old Tom Mitchell from Lymington in Hampshire has entered this year as a proud first timer helming his father’s boat, a Contessa 32, Conspiracy. Tom has been racing Optimists since the age of six and takes part in most major events. His father Ray, who will sail with him as tactician, says that the plan is for Tom to helm the start and first leg to the Needles and then take over again from the Forts to the finish line as a minimum. Ray has previously entered the Race in his Contessa Confusion and before that in English Rose, so he will be a useful guiding hand if needed.

Annie Cox, also 12, and the skipper Andy’s daughter, is from West Sussex and will be on board Solitaire, a Jouet 760, for the second year in a row.  They are hoping for a bit more breeze this year having been tided in Sandown Bay during the race in 2014. Solitaire was bought as an un-seaworthy wreck in 2008 and has since been lovingly refurbished. Designed by the French designer Philippe Briand when he was only 19, Andy reckons she represents the pinnacle of small yacht design built in 1984. “This is the 5th year that we have entered the race and we really hope that this year we’ll be able to spot the start line,” quips Andy.