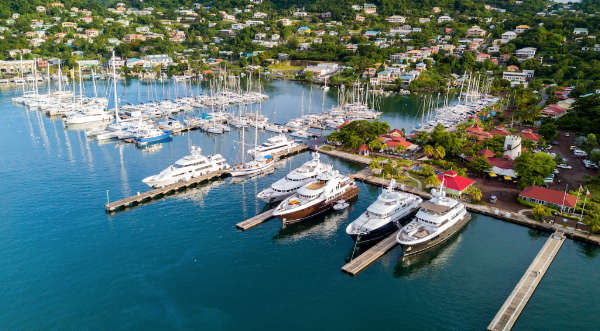 Setting off on 25th November from Marina Lanzarote, the Atlantic-bound fleet hosted by Calero Marinas forms the first leg of the Atlantic Anniversary Regatta (AAR) held in celebration of Hamburg-based Norddeutscher Regatta Verein’s (NRV) 150th anniversary in 2018 and the 50th year for the Yacht Club Costa Smeralda (YCCS).

The joint jubilee celebration, in partnership with YCCS, originally had a scheduled finish in their British Virgin Islands base, but this has now proved impossible due to the devastation caused by hurricanes Irma and Maria in the region.

“It is a great pleasure to once again be welcoming the RORC race boats in Port Louis Marina, Grenada for the fourth successive year.  We have been pleased to work closely with the race organisers to ensure the race finish is a success for everyone.  Our marina team will welcome each of the yachts individually as they arrive after their mammoth journey across the Atlantic and we wish everyone the best of luck.”  Glynn Thomas, General Manager, Port Louis Marina

“It is extremely sad news that the recent natural disasters have decimated the Virgin Islands making it unviable to take the race to YCCS on Virgin Gorda, BVIs,” explains RORC CEO, Eddie Warden Owen. “The RORC Committee in consultation with the YCCS and NRV have therefore decided to finish the race in Grenada and we look forward to returning to Camper and Nicholsons Port Louis Marina who have warmly welcomed competitors and our race team for the past three events.”

For those competing in the RORC Caribbean 600 – celebrating its 10th anniversary in 2018 – the first leg of the AAR acts as a challenging annual feeder race, as well as a great way to race across the Atlantic in company to take part in the Caribbean winter circuit. The Caribbean Sailing Association accentuates the importance of sailors continuing with plans to bring boats to race in the Caribbean regattas this season as it is the best way to help rebuild tourism and the lives of those affected.

The beautiful and well-managed Camper & Nicholsons Port Louis Marina in Grenada is the destination for yachts competing in the westbound leg of the Atlantic Anniversary Regatta.  Competitors can expect coral blue water, lush vegetation and a wonderful warm Caribbean welcome for every boat!

Meanwhile, the team at Marina Lanzarote are gearing up for a fleet of up to 25 boats; the number boosted by several German entries competing in the AAR, the first regatta series to cross the Atlantic Ocean twice, in both directions.

Along with an international fleet from Holland, Germany, Belgium, Canada, USA and Great Britain, two previous winners of the RORC Transatlantic Race Trophy will be back to defend their title in this special edition of the race. They include 2015 winner, the French Finot 100 Nomad IV and last year’s Dutch winner, Aragon. Chris Stanmore-Major’s Canadian entry, Challenger and from Belgium, Gerald Bibot’s Catamaran Ts42 Zed 6 will also be making their way to the Canary Islands for the start.

Owners of Aragon the Dutch Marten 72, Arco Van Nieuwland and Andries Verder have chartered the boat this time round, having raced last year with family and friends, but their core team skippered by Nicholas Lecarpentier with Wouter Roos and Rogier Van Overveld will be hoping to repeat their success,

“Competing in the RORC Transatlantic Race has been an amazing experience. We found that all the elements such as preparation; excellent boat; great team; great friendship and good sailing all combined to lead our team to a great result. This was all supported by fantastic organization by the RORC and an amazing Caribbean welcome from the Port Louis marina team when we reached Grenada,” says Arco Van Nieuwland on behalf of the whole team who were declared overall and IRC Zero winners in 2016.

Dutch Marten 72 Aragon won the 2016 RORC Transatlantic Race and will be on the start-line again this year and look forward to returning to Grenada.

The entry list is still open for competitors interested in taking part in the RORC Transatlantic Race, run in association with the International Maxi Association, and is the first leg of the commemorative Atlantic Anniversary Regatta starting on 25th November 2017 from Lanzarote to Grenada.