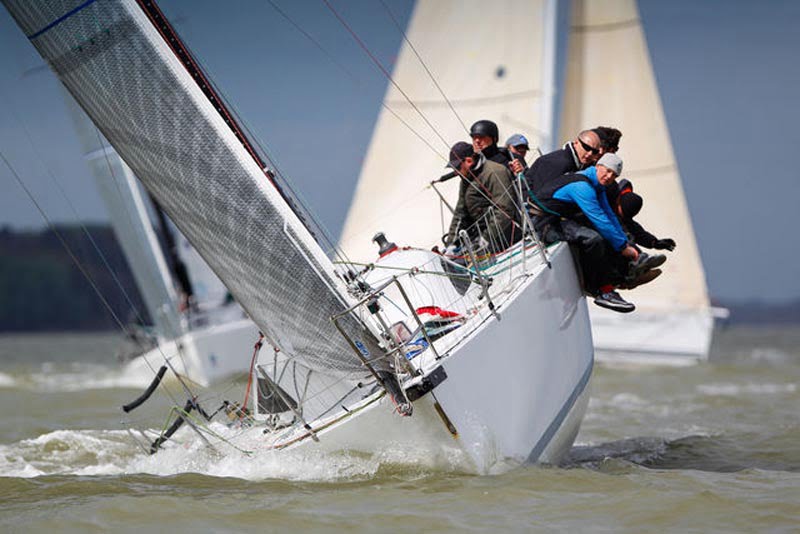 Looking at the Brewin Dolphin Commodores’ Cup results for the last eight years, GBR won in 2008, Ireland in 2010, then GBR again in 2012 and Ireland in 2014. Given this sequence it should be Britain’s turn to prevail once more in the Royal Ocean Racing Club’s biennial event for three boat teams with Corinthian crews, that starts on the Solent on Sunday.

La Réponse and Alice II were team mates in GBR White (sixth in 2010), while La Réponse returned two years later when she was fifth with GBR Red.

Admiral of the RORC and Captain of GBR Red, Andrew McIrvine is hoping that experience will pay, along with his team’s preparation: “Simon Henning has done two Commodores’ Cups and I’ve done three, so we know the format. It is pretty rugged, because it’s non-stop. You just about recover from the offshore, then you have all the inshores. It is a tough regatta, but very good and the fleet will be very competitive.”

McIrvine is satisfied with the amount of training his team has put in. During the event La Réponse will face tough competition from First 40 sistership, Frans Rodenburg’s Elke in the Flanders North Sea team, although McIrvine’s boat showed the Dutch a clean pair of heels at the IRC Nationals.

The Henning family’s tenure with the Brewin Dolphin Commodores’ Cup dates all the way back to the third event in 1996 when they raced their then relatively new Mumm 36, Alice. They campaigned again in 2010 with their Farr 45, Alice II, but return this year with the original Alice, although as Simon Henning put it: “It has changed dramatically over the years. We used to rate very, high, but we’ve now got non-overlapping headsails, etc which have made a big difference.”

GBR Blue has an interesting line-up, including two highest rated boats in James Neville’s HH42 Ino and Tom Kneen’s new JPK 1080 Sunrise. For this year’s Brewin Dolphin Commodores’ Cup there will be separate starts for the main fleet and the ‘small boats’ (ie IRC TCC of 1.000-1.049) in each team. Within the former Ino has an IRC TCC of 1.230, 28 points higher than the next fastest boat, while among the ‘small boats’ Sunrise’s rating is 1.048. In theory being ahead of their competitors, means these two will have the potential advantage of sailing in clear air.

“With the last campaign we felt we needed fast boats,” explains GBR Blue Captain Michael Blair. “However we could be proven wrong – if the weather is dead light, then the smaller boats will do well, but we have got a good range between Ino and Sunrise. We are quietly confident.”

Both Blair and James Neville are past Brewin Dolphin Commodores’ Cup competitors. Neville raced his previous Ino, a Corby 36, two years ago while the Blair family has campaigned Cobra in the last two events.

“It is a fantastic event,” says Blair as to why he’s back. “It is horribly clichéd, but it is so much fun just to take part. The RORC does a superb job putting the event on and getting everyone together at the start and the prizegiving, which is always a major event. And it is nicely structured.”

Aside from the three-boat teams, the event provides a unique mix of inshore and offshore races, including a 24 hour overnighter, which Blair likes.

Among the six boats, the small boats in both teams – James Chalmers’ Bengal Magic and Tom Kneen’s Sunrise – are first timers.

Sunrise is especially potent, being a JPK 1080 sistership to Géry Trentesaux’s Rolex Fastnet Race winner, but not the only team to select the highly successful design: six of the eight teams feature a JPK 1080 or her no less successful little sister, the JPK 1010. Marc Alperovitch’s JPK 1080, Timeline, fresh from a class win in the historic Cowes-Dinard-St Malo Race and Sunrise, class winner in the RORC Easter Challenge, will be having their own personal match race at the front of the small boat fleet, 19 points clear of the next fastest.

Being a first timer to the event and having only taken delivery of his 1080 this spring, Tom Kneen is understandably anxious about how Sunrise will get on. “I’m not sure if the boat will be as quick as everyone else or if we are going to be playing catch-up. We’ll be quite a big boat in the small boat start, then hopefully we’ll be sailing away from everyone and it will be difficult to know if we’re winning or not. On the other hand it is an amazing opportunity and I am very excited about it. In fact I’ve got butterflies…”

The GBR teams are being supported by the Royal Yachting Association with past competitor and coach Jochem Visser employed as team manager and Volvo Ocean Race navigator Libby Greenhalgh providing weather info.