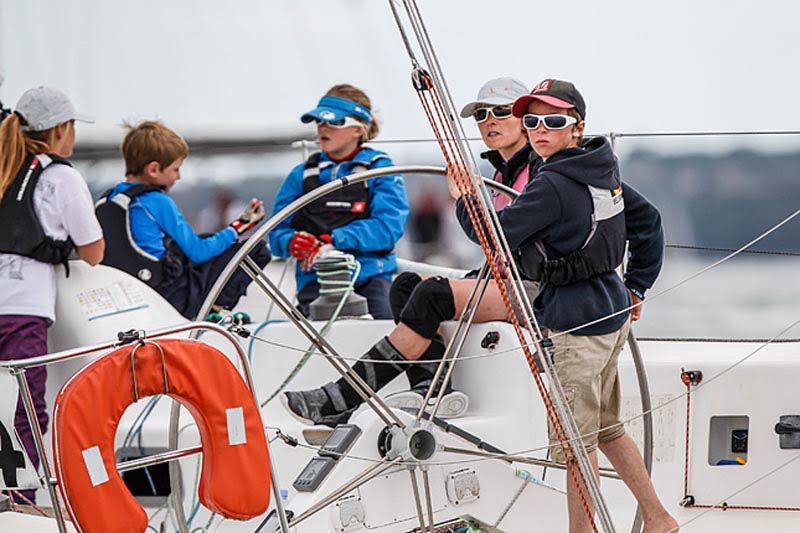 Today saw patchy sun, with a north-westerly airflow that produced a 8-12 knots of wind for most of the morning. However by midday it became more variable in strength in the central Solent, with very light patches under areas of cloud.

For the first time ever White Group dayboats started from the Bramble line. Most classes made a clean start, apart from the RS Elite fleet which was subject to a general recall when most of the fleet started prematurely. The starting sequence was then interrupted for a second time when the wind in the central Solent dropped significantly for half an hour. Only the Flying 15 and Squib classes got away before the wind died away again, eventually leaving race officials with no option other than to abandon racing for the Mermaid and Victory classes.

By 1330 the wind could be seen blowing in three different wind directions. There were Etchells kedging near Egypt Point in a very light south-westerly breeze, while immediately to the south east of the Bramble Bank the leading IRC Class 4 yachts were heading upwind in a zephyr from the east. A mile further east, near East Bramble buoy, the Grand-Prix FAST40+ fleet was close hauled in a solid north-westerly. It should have come as no surprise to competitors when the course was shortened for around half the White Group classes, as well as six Black Group fleets.

The wind was back up to 10 knots for the Swallow start shortly after midday. Sam Jenkins, Eerik Toom and Jonny Taylor’s Svala was well placed on the start line and first to get her spinnaker filled, followed by John Houghton’s Avocet. Charles Fisher, Richard Thompson and Nigel Glennie’s Migrant was first across the finish line, but had accepted a three per cent penalty for a rule infringement, which cost three places. Avocet therefore became winner, ahead of Anthony Lunch and AM Reid’s Solitude and Sir Malcolm Green’s Archon.

The Redwing class had a properly congested finish today, with the last 11 boats in the fleet crossing the line in just 73 seconds. Although starting only 10 minutes after the Swallows the wind had dropped to the gentlest of breezes for the start. This larger fleet was well stretched along the length of the line, with most boats pointing away from the first mark and barely stemming the tide, before spinning round in slow motion at the start gun.

“The wind gods were definitely smiling down on us today,” Samuelson explained. “Somehow we managed to escape all the wind holes and win by 13 minutes. Basically we had a very good start, which was key, then sailed a good course round the wind holes. It was a tough three-hour race but it was finally shortened at the Williams Shipping buoy on the Bramble, which was a good decision by the race officer.“

Black Group yachts had a tight reach for their first leg, heading east from the Royal Yacht Squadron line with the tide behind them. The overall winner in the Sigma 33 class after the first four races, David Sanger’s Blues, led away from the outer end of the line, with Toby Gorman’s Stan the Boat and Mark Watkins’ Spirit of Kudo overlapped to leeward.

It was a disappointing day for Sanger, who finished down in seventh place, while Gorman notched up his second win of the series, ahead of Jeff Worboys’ Workout and David Cheney’s Chaser. This leaves Blues and Workout leading the fleet overall tied on 14 points, with the next two boats, Stan the Boat and Allan Fraser’s Prospero of Hamble, both on 16 points.

Sam Laidlaw’s Aguila started with a two-length advantage in the Quarter Ton class. Behind her were four boats in line abreast, with Tony Hayward’s Black Fun to windward of Louise Morton’s Bullit, Julian Metherell’s Innuendo and Ed White’s Joker. After a couple of minutes Bullit slowly pulled ahead of the chasing pack, just as Aguila was setting up to hoist a spinnaker. Laidlaw took line honours more than three minutes ahead of Hayward, with Morton finishing third and all three saving their time on later finishers.

The first three boats could hardly have been closer at the end of the Contessa 32’s five hour and 20 minute race. Ray Rouse’s Blanco was closest to the line at the start, but Eldred Himsworth’s Drumbeat approached with more speed and slowly overhauled Blanco to leeward. The Rogers family’s Assent was also well placed, a couple of lengths back.

Rouse had regained the lead by the finish, crossing the line to win by 58 seconds. The next two boats finished just six seconds apart, with Rob Duke and Oli Donaghy’s Gualin taking second place ahead of Drumbeat.

The Sunsail Match F40 fleet started at 1200 in a big lull in the wind that saw Malcolm Hollis’ Malcolm Hollis swept over the line prematurely without enough breeze to power her upwind against the tide. Chris Brookes’ Sailing Forever led the pack away from the line, with Simon Morgan’s Helm and Paul Foddy’s Travis Perkins both overlapped to leeward. Sailing Forever was the first of the leaders to fill her spinnaker, almost immediately catching a new band of wind and accelerating away to a five length lead two minutes after the start.

Pete Walker’s CyberArk took a second consecutive win today, crossing the finish two minutes ahead of Sailing Forever, with Pip Hare’s Cazenove third. “We are delighted because this is our second win of the week,” said CyberArk mainsail trimmer Matt Middleton-Leal. “I think I put it down to practice, teamwork and concentration. We were hoping the race would be longer than the usual two and a half hours, but it turned out to be five hours, which is a long time for concentration. The team did exceptionally well in the light winds today, which was very important considering some had never been on a boat before. They did good, and we are about to go and celebrate.”

With the wind still very soft the yachts in Cruiser Division A took a more cautious approach to the line. The early leaders were slow to set spinnakers, allowing some of the second row boats a little further inshore, including Mike Rowland’s Grand Soleil 45 Giuliana and the towering rig of the X-55 Pioneer Lutine, to close the gap. Four minutes into the race Pioneer Lutine took the lead on the water, with Alison Hougham’s Bavaria 40 The Packhouse and Rob Denning’s Swan 46 Bewick of Cowes also gaining ground.

In Cruiser Division B two of the smallest boats in the class led the fleet into the start line, with Chris Charlton’s Nordic Folkboat Njord first away at the outer end of the line. Another Folkboat, Peter Scholfield and Melissa Ashcombe’s Riot started with good speed further inshore and was one of the first boats to set a spinnaker, pulling ahead into an early lead.