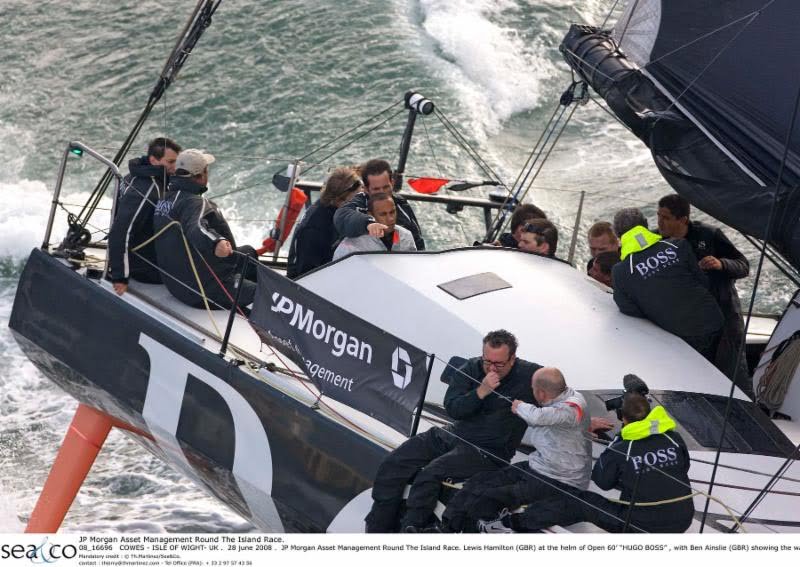 A host of bright sailing stars unite for the 2016 J.P. Morgan Asset Management Round the Island Race

A host of bright sailing stars unite for the 2016 J.P. Morgan Asset Management Round the Island Race

The Island Sailing Club, the organisers of the J.P. Morgan Asset Management Round the Island Race, are delighted to welcome back last year’s Gold Roman Bowl winner, Giovanni Belgrano and Whooper.  This duck-egg blue 1939 Laurent-Giles one-off, is owned and skippered by Giovanni who comments that he is bringing the same group of friends who are eager for another lap of the Isle of Wight on Saturday, July 2nd!

Also back on the start line is Alex Thomson skippering the 2015 IMOCA 60 Hugo Boss. When Alex competed in 2008 he was joined on board by none other than F1 driver Lewis Hamilton (2008, 2014 & current World Champion) and Ben Ainslie.

Alex’s new 60ft racing yacht has been designed by VPLP/Verdier and the Alex Thomson Racing Team and built at Green Marine in Southampton. The yacht has been built entirely of carbon fibre, using similar technologies to Formula 1, and has taken 40,000 man hours to build.  Alex’s goal is to be the first British team to win the Vendée Globe in 2016-17. As it stands today, he is the only British entry for the next edition of the Vendée Globe.

One of British sailing’s golden girls and part of Team Volvo, Helena Lucas MBE, is returning to skipper a chartered Elan 450 Squire Patton Bogs.  Helena made history claiming the 2.4mR Paralympic Gold medal at London 2012, becoming the first ever female winner of the male dominated Paralympic class and Britain’s first ever Paralympic sailing gold medallist. She is now continuing on the road to Rio 2016 on a quest for her second gold medal.

Racing in their own new class this year are the Fast 40+ boats of which five are currently signed up with more expected. Currently skippers include Peter ‘Morty’ Morton and Girls on Film, his new Carkeek 40 Mk3 Fast 40, Sir Keith Mills and his Ker40+  Invictus, Tony Dickin’s GP42 Jubileeand Michael Bartholomew’s Tokoloshe II, a 2009 GP42 modified.

They are joined by Andrew Pearce and Magnum 4, the next generation Ker40+ Grand Prix, a completely new hull design for greater stability and buoyancy forward for the downwind sleigh ride so she’ll be up on the plain faster. Andrew says that she’s longer, slightly wider and lighter than the previous Ker40 with an all-carbon construction and more sail area. Her deeper keel and rudder, greater width and 11 heavy weights on the rail, the righting moment will give faster upwind speed as well.

She will stand close to the top of the handicap range for these boats, which is 1.270. They are now over half way through the build, expected on the Hamble in the last week of April and will be ready for their first race in mid-May. We very much look forward to seeing Magnum 4 in action.

Sequel is owned and crewed by Mr Peter Trowill (aged 81) from Bosham, West Sussex, and is being raced in Gaffer Div 3 by Mike Brooke (68).

In 2015 Cornish Crabber started producing the Shrimper 21 and Sequel is the first of 30 of these trailable gaffers that were sold last year.

In  2008 Mike sailed his 19ft Gaff Cutter Theo’s Future around Britain to raise money for Moorfields Eye Hospital and other charities. The project raised over £50,000.

Phil Duff, from Milton Keynes, has entered his Elan 333, One More Knot.

He recalls: ” We weren’t very good back then! We’ve learned a lot and the results have got better.”

“After 13 years of trying, we finally won our class in the 2015 Race. Prior to that, we had many top five places and in 2013 when we were too fast and four seconds early on the line, it cost us 25 minutes! Last year was an eight-hour sprint.

Now Phil is hoping they can achieve the same high standard in 2016.

In another of the staging posts being highlighted in recognition of initiatives supported by J.P. Morgan Asset Management, it was in 2010 that the popular free water taxi services and GPS tracking for competitors were introduced. The tracking technology has since been further developed under the auspices of NGR, the technical team that also delivers the Race results and the official website.