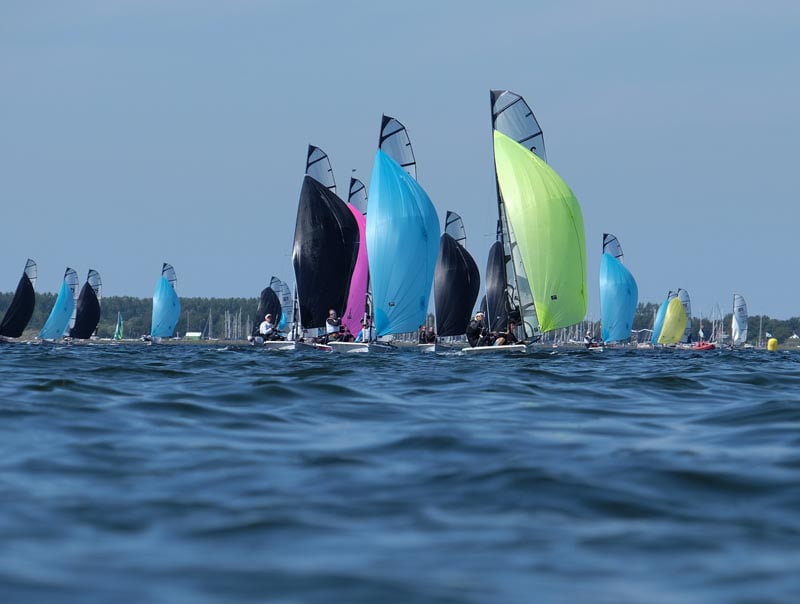 It’s been a whirlwind month in the world of RS Sailing. The RS Feva Class set the bar high as the PA Consulting Allen RS Feva World Championships was officially opened in Travemunde, Germany on 19th July. Tagged on to the infamous Travemunde Woche, complete with live music, tall ships, food and souvenir stalls, festival tents and live coverage of the racing, the championship brought an incredible vibe and an unrivalled atmosphere.

The week saw some of the tightest and most competitive racing on the worldwide junior circuit as 324 sailors from 19 Nations joined, each with their own goals and aspirations and all eager to leave their mark on the fleet. The top few boats were chopping and changing all week, with boats from Sweden, Lithuania, Italy and Great Britain among those making appearances at the top of the score board.

The final battle for the Wold title was tight and came down to a tie break between British teammates. Iain Bird and Jake Hardman got the upper hand after a win in the final race, making themselves 2015 RS Feva World Champions. Meanwhile Jack Lewis and Lucas Marshall took the junior trophy while Freya Black and Hattie Cage followed their European Championships performance taking the ladies trophy.

Perhaps the overwhelming support between nations, the endless action and adventure on land that went hand in hand with the exciting sailing and top level competition on the water is what’s cemented this year’s world Championships as one of the best in RS Feva history. Full event write up and overall results are available at http://www.rsfeva.org/indexdetail.asp?selection=ResultsDetail&evid=8.

From a sunny Germany to a not-so-sunny Holland, the Sailservice Magic Marine RS Tera World Championships was next on the agenda. Kicking off on Sunday 26th July, Bruinisse became home to 107 young RS Tera sailors and their families for a week. There was no shortage of excitement as Holland was hit by one of the worst storms since 1901 on time to greet sailors as they arrived. Despite the weather, a traditional Dutch Brass band played as teams carried their National flags to open the regatta.

A breezy week put skills of even some of the best RS Tera sailors in the world to the test. One of the best aspects of the RS Tera class is the option of either the Sport rig for the smaller or less experienced sailors (under 16) or the Pro rig, which offers more power for the bigger sailors (under 18). Split into 2 separate fleets, at times the Sport rigs were held ashore due to overbearing conditions, providing an opportunity to mingle with their friends and enjoy the friendly vibe between the RS Tera nations. Meanwhile the Pro fleet took to the water before sailors returned to shore grinning and with reports of some of the most exciting racing they’ve ever competed in!

In the Sport fleet, it was Tom Storey of GBR who took the RS Tera Sport World Title, while in the Pro fleet, teammate Harrison Pye put in a stonking performance to take the win with a race to spare. Flo Peters took the first girl prize in the Sport fleet and Michaela Robinson of South Africa did the same in the Pro fleet. Full write up and results are available at http://www.rstera.org/index.asp?selection=News%20Detail&nid=517&Fleet=RS%20Tera.

The RS500 World Championships rounded off 3 weeks of back to back racing in style. Returning to its roots where the first Worlds were held 6 years ago, 64 boats descended on Bruinisse. Varied wind conditions saw different faces at the top as the week went on. After some enforced sunbathing and morning-after-the-night-before recovery time on the opening day due to no wind, day 2 delivered a solid 15 knot breeze. The Brits and the Italians got off to a strong start to the week before the Swedes and Spanish puffed their chests and dominated in the gnarly breeze of day 3. The points remained close throughout the week and in a dying breeze towards the end it was the Dutch boat’s turn to shine.

In the end, it came down to the final race and it was Peter Barton and Heather Chipperfield (GBR) who just got the upper hand over Swedish team, Malin Broberg & Johan Rook after an untimely OCS in the penultimate race. Full write up and overall results are available at http://uk.rs500.org/indexdetail.asp?selection=ResultsDetail&evid=3297.

A top week with sun, wind, great company and fabulous parties that RS Sailors around the world have come to expect. What a way to round of 3 weeks of World Championships – it will certainly be a tough act to follow but next year’s schedule is sure not to disappoint!

Many of the RS classes including RS100, RS200, RS400, RS500 and RS Aeros will be arriving in force at Travemunde Woche, 2016. It will be a first for the RS classes and judging by a spectacular time had by all at the RS Feva Worlds this year, it’s shaping up to be a week not to be missed. Watch this space and save the date; 25-29 July 2016.

Next year’s RS Feva World Championships will be held in the lovely Santander, Spain. All the info is available at http://www.rsfeva.org/championships/cindex.asp?eid=22.

The RS Tera World Championships 2016 will be held in Spain at the Club de Vela Santoña from 29th July – 5th August. More details will be available at http://www.rstera.org/champs/cindex.asp?clselect=Home&eid=168 in due course.