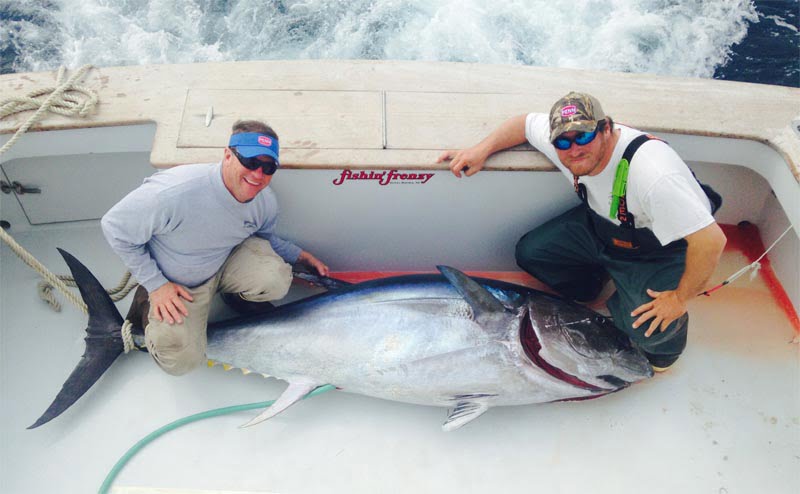 One of the stars of the National Geographic show, Captain Greg Mayer, will depend on ACR’s AISLink CA1 Class A transceiver to enhance the safety measures in place for himself and his crew as he prepares his 53ft Custom Carolina Sportfish, Fishin’ Frenzy, to work in the dangerous waters of the Outer Banks.

Enabling him to send and receive wireless data to and from nearby AIS-equipped vessels including the vessel’s name, position, course or speed over the ground, heading and rate of turn, the new ACR device will help Captain Greg to keep clear of local maritime traffic, provide reassurance that he is visible to other vessels and significantly improve navigational safety.

Captain Greg said: “The added visibility provided by AIS is another measure of safety that I feel is invaluable with the amount of ship traffic in the area. During the past few winters, we have spent quite a lot of time in the ocean, often operating through the night. Generally we keep watch, and have other boats in the area, but it will be very reassuring to have this extra back up.

“I did have a very close call in the fog last summer when I feel I would really have benefitted from having AIS. I identified a radar target as a tug and tow, calculated his heading, and slowed down to let him pass. About 20 minutes later, a fellow fisherman who was a few miles behind me with no radar heard the tug, but narrowly missed running between the tug and tow. With AIS installed, I could have identified the tug and informed my colleague about the tug’s exact location and heading to avoid any confusion whatsoever.”

Captain Greg will be able to view and track local traffic on a clear graphical interface and will also have the ability to send and receive AIS text messages, set active AIS system alarms and calculate vital information such as closest point of approach (CPA) so that he knows when his vessel is in danger. Compact and easy-to-use, the AISLink CA1 is a GPS-enabled, commercial standard system which demonstrates the highest AIS transmission power and the most frequent transmission of AIS information. It is approved worldwide for deep sea and inland waterways.

The Fishin’ Frenzy will have additional ACR equipment on board this year, including: the GlobalFix™ iPRO Emergency Position Indicating Radio Beacon (EPIRB), with digital display and dual GPS technology; the Sea Shelter™3 Cat I EPIRB Bracket, a streamlined and robust bracket to protect an EPIRB in the harshest conditions; HemiLight™3 flashing survival light which attaches to almost any life jacket; the C-Strobe™ with C-Clip, a super-bright Xenon strobe which flashes 60 times per minute and is visible for up to 2 miles.

Experienced professional fisherman Captain Greg added: “Winter fishing on the Outer Banks is no time to be unprepared for whatever the ocean may throw at you. When my crew’s safety is on the line, I depend on ACR.”

Further expanding its portfolio of maritime survival products with the launch of AISLink CA1 and AISLink CB1, ACR has entered the AIS market to both serve the needs of customers with the upcoming mandates, including the new USCG AIS mandate effective in March 2016, and provide additional levels of navigational safety to mariners. For more information, visit www.aismandate.com or go to www.acrartex.com.

The first episode of Season 5 of Wicked Tuna airs in the United States on Monday, February 1 at 9/8c.