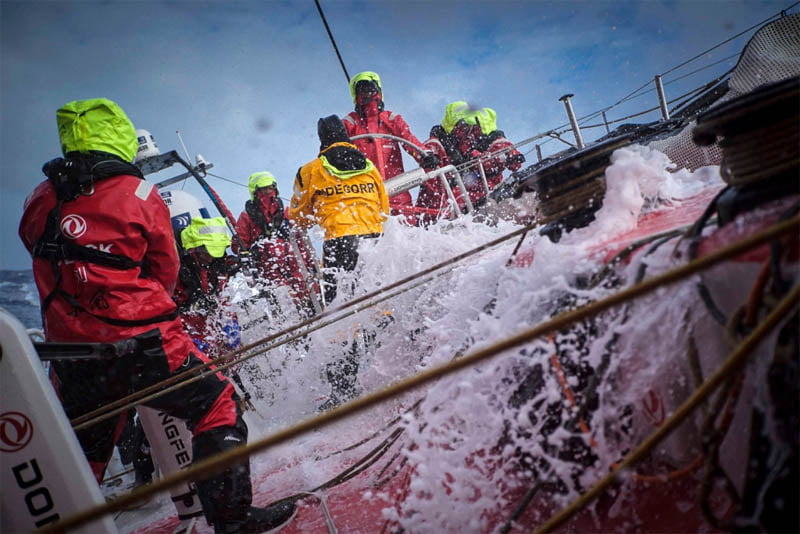 There are three standout moments in the Volvo Ocean Race; the start, the finish, and rounding Cape Horn. Leaving from Auckland, New Zealand, Leg 5 is what every sailor dreams of. Descending into the Southern Ocean through the Roaring Forties, and down into the Furious Fifties, this is the only ocean in the world where the huge waves and weather systems are free to circle the planet unchecked by any land mass. Along the way, the Volvo Ocean Race passes the most distant point from land in any ocean, before rounding the legendary Cape Horn and sailing North to Brazil. The performance of the systems through the Southern Ocean is a testament to their quality, technology and to the extensive testing that Mastervolt executes on all of its products. These are the reasons Mastervolt was chosen as the official electrical supplier to the Volvo Ocean Race – advanced technology, reliability, integration and support.

Each of the seven, 20.37m (66 ft) carbon-fiber sailboats is equipped with intelligent Mastervolt electrical systems that generate, store and distribute all power requirements for the boat and communication equipment. Throughout the race, Mastervolt, the global leader in power conversion products and integrated power management systems, has utilized data and feedback from the race teams to fine-tune the onboard systems for optimal efficiency.

The Southern Ocean has always exacted a toll on boats, sailors, and systems. Broken masts, shredded sails, damaged structures, and injuries to sailors have been factors in this and previous Volvo Ocean Races. Exacerbating this is the incredible intensity of the current competition. The sailors are pushing harder than ever, four or five boats within a two mile radius after thousands of miles racing, swapping gybes day and night with closing speeds of over 30 knots, missing each other by just a few metres. Wipe outs and Chinese Gybes have left boats lying on their sides in the wind and massive waves, as their crews frantically fought them back upright, pumped water from inside the boat, then resumed the charge towards Cape Horn. These extraordinary conditions, including variations in temperature, shock, and vibration, have put the equipment through their paces. If you total the usage of the products throughout the race, it is tantamount to more than a decade of recreational cruising without any breaks.

At each of the stopovers of this 38,379 mile race, there is an area named, “The Boatyard.” This is where each of the vessels is serviced. Run by VOR maintenance manager, Nick Bice, the Mastervolt on-site technical staff is an integral part of the team, keeping in touch with the crews via satellite while racing and in person, at the Boatyard, to inspect each vessel’s systems.  Feedback from the teams throughout this process is vital, and has resulted in updates to optimize the systems. “Suggested improvements from the teams have included small alterations in the operational parameters of the lithium batteries, and changes to the type of sound that the low voltage alarms might make so that they do not disturb sleeping crew members,” said Dennis de Beer, Mastervolt’s Application Engineering Team Leader. “These improvements to optimize performance and conditions have been executed through simple changes to settings in the CZone™ digital switching technology or power systems. Any update made to a specific boat is also copied on all of the other vessels to maintain fairness throughout the race,” he added.

When the Volvo Ocean Race finishes at Gothenburg, Sweden in June of 2015, Mastervolt’s engineering team will have evaluated and provided a comprehensive assessment of each system’s performance. They will utilize what has been learned from the race in the development, expansion and improvement of the Mastervolt product range. “The feedback and data from this race will be invaluable to us,” said Dennis de Beer. “Mastervolt always strives to push technology and reliability forward, the extraordinary conditions of the race and the data will help us as we develop the next generation of onboard power and management products.”

For more information on the role of Mastervolt in the Volvo Ocean Race, please go to:  www.poweredbymastervolt.com