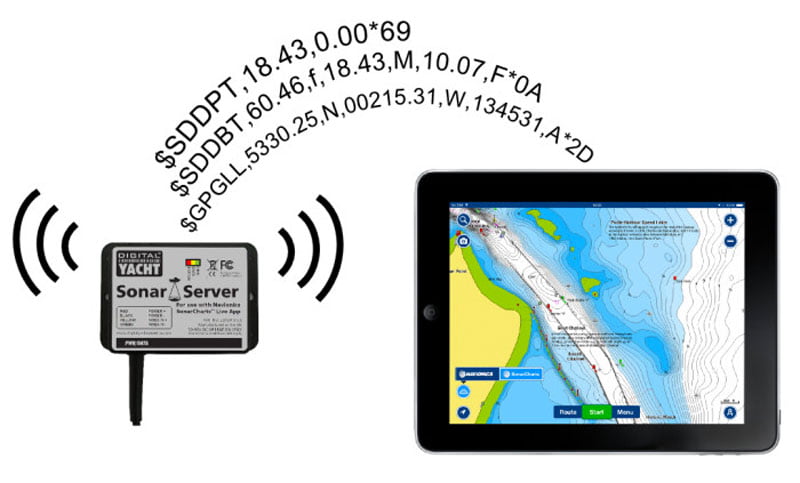 SonarCharts Live is the latest advance in SonarCharts technology allowing users to view sonar recordings in an exciting real-time display on the Navionic’s app. The newly generated personal HD chart is then saved for private use on the device, while recorded depth data is anonymously shared with Navionics to improve SonarCharts for all boaters. All data is cross-checked with other community contributions to ensure accurate daily enhancements.  SonarChart Live is truly fascinating to watch – as you move, you’ll see the map expose the underwater surface and the contour details revealed.

Sonar Server from Digital Yacht acts as a wireless gateway from on board electronics to the mobile device – sharing boat depth data with the app. In addition to depth information being transmitted, GPS data can also be sent allowing, for the first time, the Navionics app to utilise boat data for positioning on the chart as well as depth recording. This allows devices without a GPS, such as a “Wi-Fi Only” iPad or even an iPod Touch to utilise the charting app for real time navigation.

Sonar Server connects to the boat’s NMEA 0183 system using a simple 2 wire connection. It creates a wireless network on board that can typically footprint a boat up to about 25m in length. No internet connection is required on board. Sonar Server costs US$119.95/£99.95 and is available from www.sonarserver.com or through an in app purchase. For NMEA 2000 systems, Digital Yacht’s existing NavLink wireless NMEA server can be used.