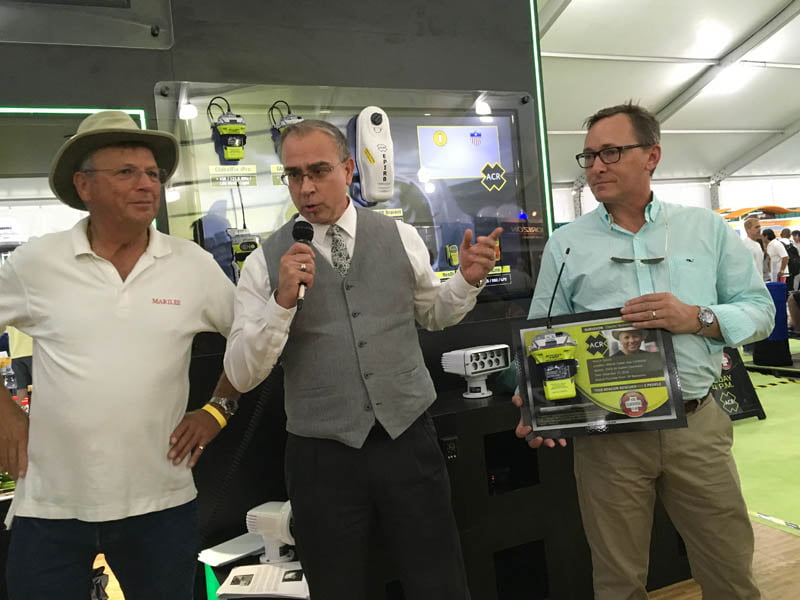 A British professional captain who survived the night time capsize of a catamaran last year has joined forces with safety specialist ACR Electronics, a Drew Marine company, and the United States Coast Guard to offer important survival advice to boaters by relating his tale of survival.

As part of ACR’s commitment to raising awareness about carrying a properly registered distress beacon, the leading US safety equipment specialist brought together Mr. Nethersole and two representatives from the Coast Guard centre involved in his rescue at the Miami International Boat Show.

Nethersole related his harrowing story from the recent incident when the 2008 Atlantic 57 catamaran was suddenly lifted and flipped over by a likely tornadic waterspout during the night about 400nm north of the Dominican Republic while on a delivery voyage from the Chesapeake Bay to St Maarten. The ACR Electronics GlobalFix PRO EPIRB onboard was activated and the signal quickly picked up, with a U.S.C.G. aircraft dispatched within a few hours of capsize to locate the distress call.

Nethersole, who attended Britannia Royal Naval College, Dartmouth, as an officer under training in the Royal Navy in the early seventies, returns frequently to the UK from his Miami base. He has 14 years’ experience on the Atlantic 55 and 57 cats as well as decades of delivery and racing experience on a variety of offshore yachts, described the moment of the capsize for him and his two crew, Carolyn Bailey and Bert Juno Lewis. He said: “The true wind speed was about 18 knots, (apparent 24) and I was about to harden up when a roar from a gust of wind hit the boat. The starboard hull lifted and continued rotating over. Even though I was standing at the helm station I had no time to disengage the autopilot before I was off balance as the boat went over completely. There was a lot of crashing noise, and water pouring in through the smashed front door.”

The Leopard crew had a properly loaded ACR RapidDitch Bag with the EPIRB, a fully-charged handheld VHF, an Electronic SOS Signal and other gear. They also had two immersion suits and one survival suit to wear while waiting. Leaving the EPIRB submerged in the water in the dinghy to transmit, they eventually sighted the Coast Guard C-130 search aircraft as it passed by and dropped a flare to guide a nearby freighter, the M/V Aloe, which was directed to pick up the crew following a stressful 10 hours spent on the overturned hull.

U.S.C.G footage of the rescue can be viewed here: https://www.youtube.com/watch?v=jpZaxlWwep4

Now in its fourth year, SurvivorClub originally launched at the Miami Boat Show and is nearing 200 members. The program provides a free replacement beacon for all its members and helps to provide compelling, first-hand evidence that 406 MHz beacons should be part of every boater’s safety kit. For information on ACR Electronics’, go to https://www.acrartex.com/.