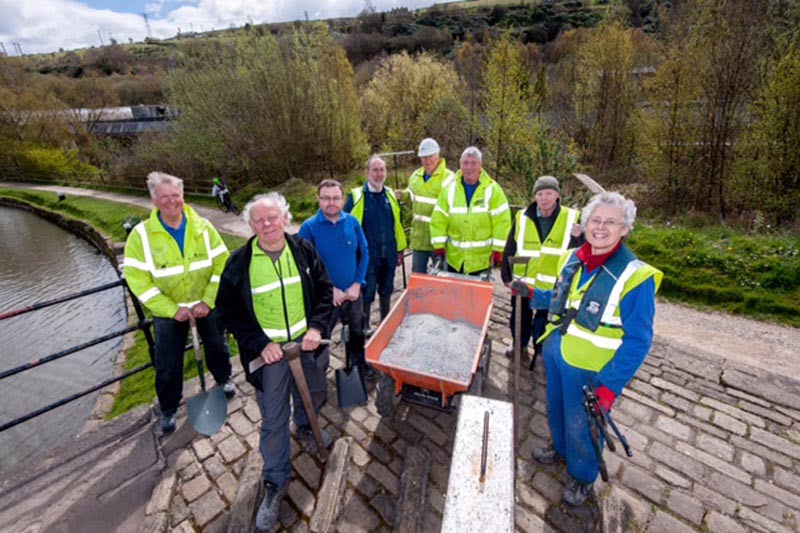 The Canal & River Trust, the charity that cares for 2,000 miles of waterways in England & Wales, has praised the support of members of the public after a fundraising appeal launched to support flood-hit communities raised more than £140,000.  The appeal was launched to help communities along Calderdale’s flood-damaged waterways get back on their feet.

The money raised has bolstered the clean-up efforts and helped to repair almost all sections of towpath that had been damaged and in some places washed away. As a result important links between communities have been reinstated and local residents can once again enjoy getting away from it all on their nearest towpath.

Many of the towpath works have been carried out by dedicated volunteers who have given over 3,500 hours to clear dumped silt, fill in holes, and resurface washed out sections of path. Volunteers from 8 to 80 have pitched in with people from local businesses, community groups, canal societies and even a team of junior soldiers all getting involved.

Since the devastation of the Boxing Day floods over 10km of damaged towpath have been restored and sections of canal from Hebden Bridge to Salterhebble and Brighouse to Wakefield and beyond reopened to boats, with more due to follow in the coming months.

The appeal has had wide support from members of the public as well as a special £25,000 award from the players of People’s Postcode Lottery. The Government has also provided match funding to support the efforts.

David Baldacchino, waterway manager for the Canal & River Trust, said; “We’re so grateful to everybody that has helped to get sections of canal and towpath reopened whether that be through donating to our fundraising appeal or pitching in with the clean-up and repair efforts.

“The area’s waterways and towpaths are incredibly important for local people, providing a traffic-free means of getting around as well as an attractive place to escape the stresses of daily life.

“Reopening them is an important step in helping to get Calderdale back on track and the tremendous generosity that we’ve seen from members of the public, the local community and players of People’s Postcode Lottery has been invaluable.”

Clara Govier, Head of Charities at People’s Postcode Lottery said; “The devastation of the Boxing Day floods on Calderdale’s waterways was shocking and has had a real impact on local communities. We’re delighted that players of People’s Postcode Lottery have helped to get these important community spaces reopened so that they can once more be enjoyed by local people.“

To find out more about the impact of the floods on waterways in Calderdale and the work that has been taking place to help them recover go to www.canalrivertrust.org.uk/rebuilding-canals-in-the-heart-of-flood-hit-communities