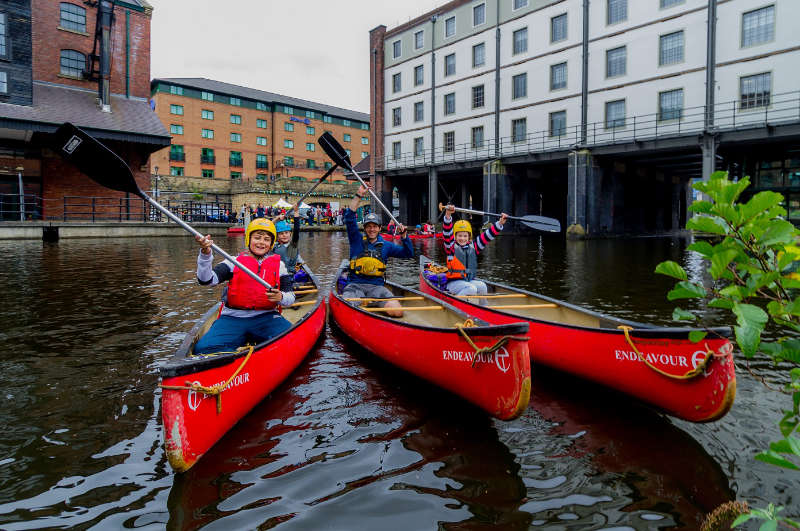 More than 5,000 visitors helped to celebrate the city’s waterways this weekend. Sheffield Waterfront Festival, the city’s biggest festival of its kind, was organised by waterway charity, the Canal & River Trust and Kelham Island Museum with support from the River Stewardship Company and coincided with this year’s global celebrations for World Rivers Day.

The city’s waterfront – from Victoria Quays along the Sheffield & Tinsley Canal and the River Don was transformed with a bumper-packed weekend of family-friendly activities, live music, art, food and drink.

On Saturday 23 September visitors enjoyed a range of free water-based activities at Victoria Quays on the Sheffield & Tinsley Canal, including fishing and canoeing tasters and boat trips along the canal. Other highlights included an exhibition of designs by internationally acclaimed artist Alex Chinneck for the major Tinsley Art Project due to open in 2019, artwork by local artists Norah K Rogerson, Joe Scarborough, Sheila Burys and street artist Philip Padfield. Dancing by 5 Rivers Morris and a tea-party with Victorian ladies and gentlemen, provided a sense of nostalgia to the canal basin site, which opened on 22 February 1819.

The Sheffield Waterfront Festival is part of the Canal & River Trust’s plans to reconnect the local community to their waterway over the next 18 months, ahead of the Sheffield & Tinsley Canal’s bicentenary in 2019.

Tom Wright, development and engagement manager for the Canal & River Trust said: “It’s wonderful to see so many people support this event. Sheffield would not be the city it is without its waterways. This festival celebrates the city’s industrial heritage which played such an important part in its development. The River Don and Sheffield & Tinsley Canal not only connected the city to the wider world, they powered the foundries and workshops of the 18th and 19th centuries.”

He added: “We’ve been bowled over by the support we’ve had from businesses along city’s waterfront and would love for Sheffield Waterfront Festival to become an annual event. A special thanks to our supporters, who have helped to bring this event to the city – the River Stewardship Company, CMS, Born and Raised and the Hilton Sheffield Hotel and the hard work of The Friends of Blue Loop and those volunteers who have been busy preparing the waterfront to ensure it looks its best ahead of the festival.”

On Sunday 24 September visitors enjoyed the setting of Kelham Island Museum on the banks of the River Don to try a range of have-a-go heritage and traditional crafts, community stalls, local artisans, kayaking and riverside walks and talks, plus live music, food and drink.

Niki Connolly from Sheffield Industrial Museums Trust that looks after Kelham Island Museum said: “It’s been fantastic to see so many people coming along to support our riverside and canal heritage.  It’s great to see this historic site come to life with people discovering the role waterpower played in the history of the Island and the growing community of people who live and work here. I hope we can continue to build on this year’s event in future.”

Hellen Hornby, Communities, Education and Engagement manager for the River Stewardship Company said: “We’ve had some lovely feedback from visitors to Sheffield Waterfront Festival and it seems that there’s a real appetite to continue to do more vibrant events like this for the local community to enjoy.”

Sheffield & Tinsley Canal travels through areas and communities that will be transformed in the years to come – Attercliffe, Tinsley and the fast-emerging Olympic Legacy Park. As the focus of the city will increasingly look to the east to provide exceptional places to enjoy, live and work, Sheffield’s waterways will once again be seen as an asset that can power the city forward for another 200 year.

Councillor Mazher Iqbal, cabinet member for business and investment, at Sheffield City Council said: “There is no doubt that Sheffield’s canal and riverside has great history and great potential. We are keen to reconnect the city centre with its waterways – the canal, rivers Don Porter and Sheaf, and are making excellent progress in this ambition. We recently unveiled plans for Castlegate which include the chance of uncovering part of the River Sheaf and an archaeological dig on the site of Sheffield Castle.”

He added: “This festival will focus people’s attention on one of the city’s gems and will also include some plans for further up river and how the canal can deliver regeneration and culture from the city centre to Meadowhall, Attercliffe and Tinsley.”

For more information on the work of the Canal & River Trust, including lots of volunteering opportunities and how to donate, visit www.canalrivertrust.org.uk