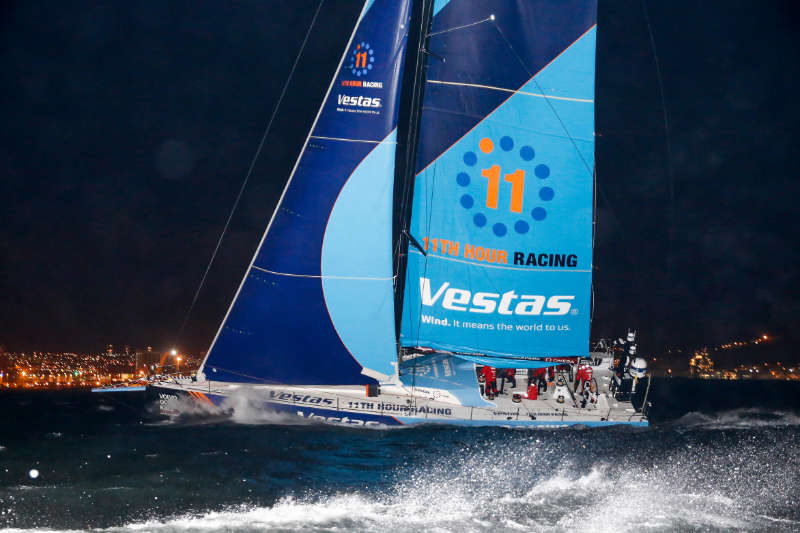 After 7,000 miles of close ocean racing, it was a podium finish for Vestas 11th Hour Racing in Cape Town, South Africa. The crew of seven men and two women, plus one onboard reporter, finished in third place at 1937 UTC on November 24. The Danish and American flagged vessel left Lisbon, Portugal on November 5th with a bullseye on their back after winning Leg 1 from Alicante, Spain.

“For us, it continues to be about the process. We are trying to get faster through the water and fine tune our decision-making process,” said skipper Charlie Enright (USA) upon docking into V&A Waterfront in Cape Town. “Lucky for us, this isn’t going to be decided until June, so we still have a lot of time.”

“We got slingshot out of Lisbon and encountered a lot of downwind fast sailing,” continued Enright’s co-founder and Team Director Mark Towill (USA).  “The team came together well. We still have a long way to go but we can’t argue with a podium finish.”

For over half of the 20 days at sea, the team was within sight of at least one of their competitors.

“The close racing of this leg over many miles has offered us a tremendous opportunity to up our game, evaluate our setup, and we have learned some good lessons and made some improvements onboard,” said Navigator Simon Fisher (UK).

The last 24 hours were nail-biting with both Vestas 11th Hour Racing and Dongfeng Racing battling it out for second place opting to go into Stealth Mode – the once-per-leg opportunity to have positions withheld from the skeds and tracker for 24 hours.

“We’re pushing hard wherever we can,” said Jena Mai Hansen (DEN), on her first Volvo Ocean Race leg. “We are a very young team, and we didn’t expect to start out this well. It’s been a dream start for us. The team is working really well together; We’re gonna keep fighting for more.”

“The boat has held up well this leg. There were a few sail tears early in the leg and an issue with the toilet a few days ago that wasn’t a fun repair, but we got those all set and have been happy with her performance,” said Nick Dana (USA), Boat Captain.

Finishing third in Leg 2 puts five more points on the scoreboard for Vestas 11th Hour Racing. This means the team currently sits in 2nd overall, just one point behind the Leg 2 winner, MAPFRE and 2 points ahead of Dongfeng Race Team who finished second in the leg.

Leg 2 Highlights
The first 72 hours of the race out of Lisbon were made up of the ocean conditions that define the Volvo Ocean Race: fast, wet, and downwind. The team averaged well over 20 knots as they raced down out into the Atlantic past Madeira and Cape Verde.

Next, the dreaded Doldrums – the area just north of the equator known for light air, which turned out to be less about lack of breeze and more about managing the clouds that can bring heavy rain and 30 knots of breeze without warning.

“A lot of sail changes, not a lot of sleep,” said Skipper Charlie Enright (USA), summarizing this year’s Doldrums crossing.

Sailing across the equator on Day 8 was the first time for Danish sailor, Jena Mai Hansen, and French Onboard Reporter, Martin Keruzoré, which meant they were inducted into an elite group of sailors with a visit from King Neptune.

“To top off the official ceremony, we were presented with a beautiful pendant adorned with a salt-dried flying fish from the Atlantic,” said Keruzoré (FR) in one of his boat logs.

It was a race to get west from there. The south-easterly tradewinds that blow south of the equator, gave way to fast reaching towards the coast of Brazil where the team struggled to find the right mode to optimize their speed.

“It is fair to say that in the conditions we have encountered in the last couple of days, Brunel has had something of a speed edge,” said Fisher in one of his blogs. “The elastic has stretched and contracted, but somehow, we have ended up back alongside each other each time.”

For much of the race, they could see Team Brunel either through binoculars or on AIS – a safety system that uses the ship’s radio to broadcast the vessels position to nearby marine traffic.

Then, after eight days on port tack and fully into the South Atlantic, the team gybed on Day 13 to start the trek east, riding the ‘Cape Town Express’ – the low-pressure system full of fast, downwind sailing.

“Feels great to be on the other gybe,” said Tom Johnson (AUS) as he stacked all the gear that must be moved from side to side of the boat every time they turn. “I was getting pretty lopsided.”

“The mood on board has been particularly good this evening, no doubt as we have finally turned the boat and are pointing the bow roughly in the direction of Cape Town,” wrote Navigator, Simon Fisher that day.

At one point last Sunday, the position reports showed Vestas 11th Hour Racing in the lead due to the proximity to Cape Town. However, MAPFRE sailing further South was able to position themselves into better pressure and slowly sailed into a leader spot and held it all the way to Cape Town.

By Monday, temperatures dropped, and they were sailing in Southern Ocean conditions.

“The process of getting dressed takes much longer,” said Stacey Jackson (AUS). “Now we are in full drysuits, gloves, balaclavas, and thermals. But as Charlie said this morning: ‘It’s Monday. Just one week of work, and then we are on vacation,’ so this is our time to push hard.”

CAPE TOWN PREVIEW
The team will now be in Cape Town, South Africa until the start of Leg 3 on December 10th. The boats will haul out in the Boatyard for a full systems check, before upcoming extreme Southern Ocean legs to Melbourne and, subsequently, Hong Kong.

“It is amazing to sail back into Cape Town,” said Mark Towill. “The city, the people, and the breathtaking view of Table Mountain are like no other place in the world.

“It is tough to hear about the drought they are having in South Africa since we were last here. I am glad that this time we have partners like 11th Hour Racing and Vestas to help us raise awareness and make an impact while we are on shore. They are both leading major efforts on sustainability  including leading the world in using wind as an alternative, low-water energy source and finding solutions to minimize human impact on the marine environment.”

Cape Town is currently in the worst drought it has faced on record – the drought has been ongoing since 2015.  Our partner Bluewater, together with 11th Hour Racing, will be helping the Volvo Ocean Race provide potable water at the stopover, eliminating the use of nearly half-a-million single-use plastic water bottles.

As part of their legacy throughout the race, the team will meet with the local non-profit organization Environmental Monitoring Group (EMG), to learn about their mission and work with the communities around Cape Town. EMG will receive a grant from 11th Hour Racing for their work, which focuses on protecting the natural environment and resources that sustain life, including fair access to water. Sailors will meet with EMG during the stopover to learn more about their work.

“It’s a great privilege to travel around the world and learn about local issues through the eyes of the communities we visit. As athletes, we can ignite important conversations about society’s relationship with the natural environment and sustainable development. We are very much looking forward to learning about EMG’s important work in the fields of climate change, rural development, and water resource – and contributing by doing our part.”