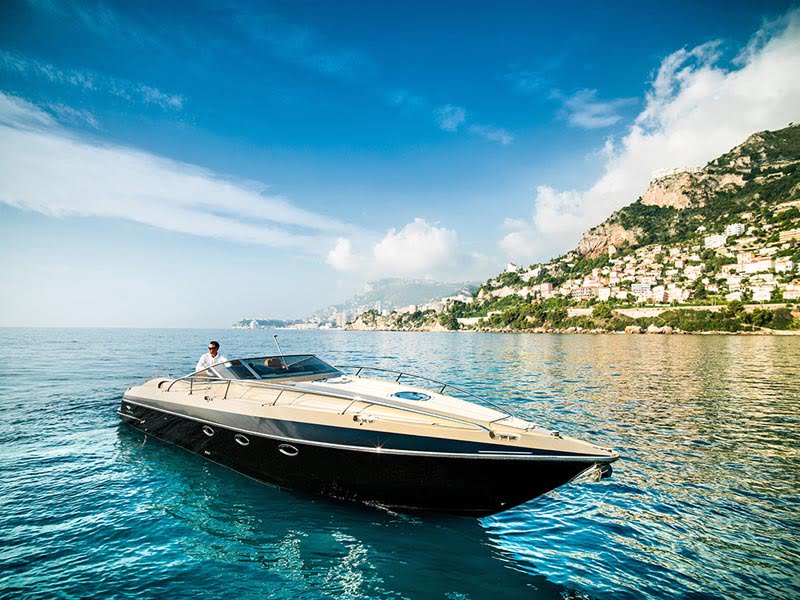 Think of James Bond’s gadgets and it does not come much bigger than a yacht. A luxury yacht is the ultimate style icon, be it from sailing a 54-foot yacht up Venice’s Grand Canal as in the movie remake of Casino Royale, to navigating through the British Virgin Islands or coasting around the Cote d’Azur. The world’s your oyster as top destinations go for sailing a coveted luxury yacht to paradise and mooring up.

Yachts from the likes of Hunton, a British luxury yacht maker based in Romsey, Hampshire, with a veritable pedigree dating back over 30 years and designed by the legendary offshore powerboat racer Jeff Hunton, are not just confined to being used for dramatic purposes in the film world.

Aside from the outlay in buying a luxury yacht there are the annual running costs and mooring fees to consider. While such fees might be a drop in the ocean for well-heeled owners, daily mooring fees at the world’s top marina locations can range from around €1,000 at Yacht Haven Grande in St Thomas, US Virgin Islands, and ACI Marina in Split, Croatia, right up to over €2,500 at Marina di Porto Cervo in Sardinia or Marina Grande on Capri, Italy.

Some of these luxury yachts might be classed super or mega yachts. But at the end of the day their millionaire and billionaire owners need to choose a marina to dock up where they can entertain, cruise around, host a party and explore new experiences onshore.

While the marinas themselves often offer round-the-clock concierge services, for the yacht owners it is far more about the destinations, some of which have beautiful beaches, great nightlife, private clubs and other jet-set activities.

So here is a list of the top destinations around the globe to berth your luxury Hunton yacht.

Amongst the top luxury travel destinations, Yacht Haven Grande in St. Thomas, which is regarded as the premier marina in the Caribbean for super yachts measuring over 137 meters, is located beside seaside residences in the area and offers a shopping mall with a plethora of eating, entertainment and recreational options. Yacht Haven Grande’s welcome village and entrance lead to the mall shops, exquisite waterfront dining and a breathtaking seaside atmosphere.

Not only one of the most famous ports in the world, Port de Saint-Tropez in the south of France is regarded as one of the major hubs in the Mediterranean and has long been linked with the rich and famous. It is probably one of the best spots to people watch in the world. Lounge and relax in the one of the outdoor port cafés whilst members of Towie and The Wives of Orange County sashay through the mopeds and elegant French citizens.

Made famous by Bridget Bardot back in the 1950s, this town with its quaint narrow streets on the French Riviera still attracts the celebrities and models.

Gustavia, the capital of the Caribbean island of Saint Barths which also contains the island’s main harbour, has many top-end boutiques and some 25 hotels. Hotel Le Toiny  (www.letoiny.com), a five-star luxury villa resort, is a very glamorous hotel on the island with 14 villa suites set in 42 acres.

After docking your Hunton why not check out a few of the restaurants serving American, French, Italian and other types of cuisine. Reserve Naturelle, the island’s marine nature reserve covering 1,200 hectares, is designed to protect the island’s coral reefs and definitely worth checking out.

Bump into A-list celebrities such as Beyoncé and George Clooney exploring the island of Capri in the Gulf of Naples. It has been a favourite with the rich and famous since Clark Gable and Sofia Loren used to congregate on the island back in the 195o’s. At Marina di Capri one can pay around $4,000 a night during high season.

The most visited attraction on Capri is the Blue Grotto (Grotta Azzurra), a cave with the remains of ancient Roman rock that was discovered in the 19th century. Other main island features include the little harbour Marina Piccola and Belvedere of Tragara, a high panoramic promenade lined with villas.

Dock, dine and discover in Yas Marina, which is situated on Yas Island. Not only does it boast one of Abu Dhabi’s best marinas but is home to vibrant venues that offer dining, fitness and leisure facilities.

The 227-berth marina features seven licensed restaurants and lounges accommodating and catering to all tastes and budgets. From each outlet along the waterside promenade great views are afforded of the Yas Viceroy hotel and the race track where the F1 Abu Dhabi Grand Prix is held. Later this year (28-29 October) the Yas Marina Boat Festival takes place.