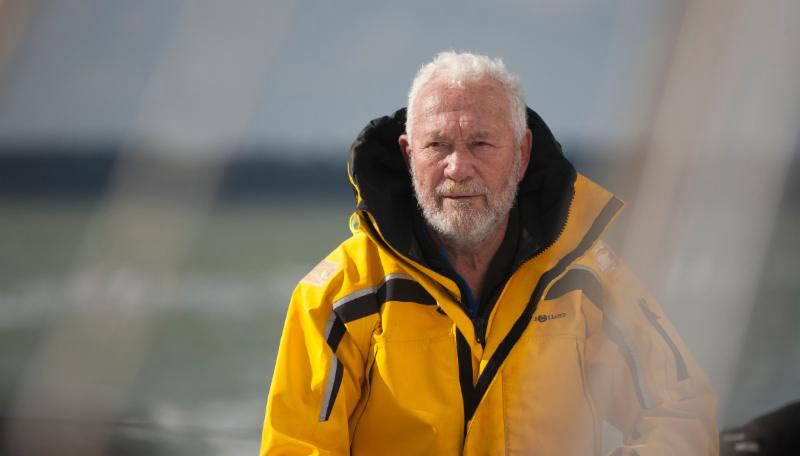 A lively champagne reception and the opportunity to watch a time lapse video telling the story of the piling and dredging  works that have been taking place to build the Prince Philip Yacht Haven since the start of construction, launched the start of the Royal Southern Yacht Club Fitting Out Supper on Saturday evening (28th March).  The Yacht Haven will start to accept its first boats in one week’s time, with the shoreside facilities following a few weeks later.

The Hamble-based Club welcomed 175 guests for an evening of delicious food, the presentation of Awards and an entertaining post-dinner speech from sailing legend, and Honorary Member, Sir Robin Knox-Johnston.

Following the Loyal Toast from Vice Commodore Karen Henderson-Williams, there was a presentation of the Cruiser Log Prize by Derek Gange to Peter and Christene Tanner for their Log entitled ‘Oojah’s Atlantic Odyssey’, covering their 2½ year cruise down the west coasts of France, Spain, Portugal, Morocco and across to the Canaries, Azores and Caribbean, before cruising the east coast of the USA from Bermuda up to Newport, Rhode Island.

The Frank Heenan Award for Shorthanded Racing or Cruising is presented annually to Club members who have excelled at singlehanded sailing, be it racing or cruising. This year the Award was given to 24 year-old Alan Roberts, whose parents Flavia and Damon Roberts were present to pick up in Alan’s absence as he was away racing in a warm-up for La Solitaire du Figaro off Brest.  Alan started sailing with the Southern’s Splash Club 16 years ago, going on to become national champion in RS420s, Merlin Rockets and XODs, before going to the Artemis Academy and now the Figaro.

Commodore Chris Mansfield welcomed the evening’s guest speaker, Sir Robin Knox-Johnston.  It was on the 14th June 1968, 47 years ago, that Sir Robin left Falmouth with 120 cans of Tennants beer, a load of tinned food (there was no dried food in those days), and a voucher from Cadbury’s (handy on the ocean)!

He set off on the Sunday Times Golden Globe Race to circumnavigate the world alone and non-stop, on his 32ft yacht Suhali, a race that has provided a vast armoury of anecdotes; a race that he won.  Since then, Sir Robin has undertaken many extraordinary feats of endurance on the world’s oceans but he chose to regale his fellow guests with some wonderful glimpses into his extraordinary 312 days at sea, aged just 29.

These included watching himself gradually turn from blue to pink when warming himself up with brandy after having to dive into the Southern Ocean to fix his self-steering and, at one stage, he had to shoot up the rigging to avoid the impact of an 80ft wave, 1400 miles from Australia, which would otherwise almost certainly have washed him overboard.

On behalf of the Royal Southern and in recognition of his lifetime of racing achievements and many other extraordinary feats of seamanship, the Commodore presented Sir Robin with an Achievement Award, an engraved crystal decanter.

The evening was then rounded off with a vote of thanks to Sir Robin and the Club’s staff from Graham Nixon, Rear Commodore Sailing, along with a toast to the new season.