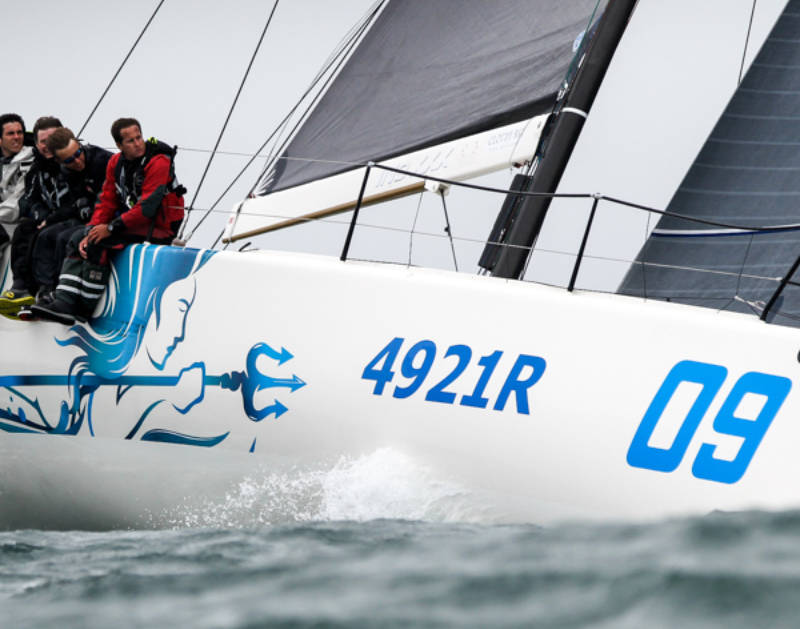 The RORC fleet was a spectacular sight in the Solent, as they started a memorable race around the Eddystone Lighthouse and back around the Isle of Wight to the finish. George David’s American Maxi Rambler 88 finished the course in just over 29 hours, however the smaller yachts endured over three days to complete the course.

Rambler 88 returned to RORC racing in IRC Zero, to take line honours in the Myth of Malham Race, nearly nine hours ahead of any competitor and take pole position in IRC Zero for the season. However, Venomous was the winner of IRC Zero for the Myth of Malham Race, much to the delight of skipper, Derek Saunders: “Looking at the forecast before the race, we were expecting 25 knots downwind to Eddystone then a 180 degree wind shift to return downwind back to the Solent. The reality was we had 25 knots on the nose and driving rain from the start and after rounding Eddystone, a beat home in more driving rain, and we got becalmed twice. On the plus side, mother nature put on a firework display for us as we floated over the line, and it was all worthwhile in the end. This was a hard race, we have now tested every jib on board at least twice! The crew worked hard, this was great training to ready the team for the Rolex Fastnet”.

The closest contest in the 140 boat fleet was played out in IRC Three, Rob Craigie’s Sunfast 3600 Bellino, racing Two Handed with co-skipper Deb Fish, was the winner by less than nine minutes after IRC time correction from Delamare & Mordret’s JPK 1080 Dream Pearls. Ed Fishwick’s Sunfast 3600 Redshift Reloaded, also racing Two Handed, was third. The class win lifts Bellino to the top of the overall rankings for the RORC Season’s Points Championship, by just 0.6 of a point from Foggy Dew.

“The forecasts were all wrong for the whole race.” commented Bellino’s Rob Craigie. “Co-skipper Deb Fish is very good at the weather and she guessed more right than wrong. In the big picture, we stayed away from land and followed the wind shifts, which served us well. We were impressed with Redshift, who had great height and speed upwind. I would like someone to show me how to do that.” When Rob found out that he was just 0.6 ahead of Foggy Dew for the Overall RORC Season’s Points Championship, he commented. “I know Noel (Racine) very well, we had a beer in the RORC Clubhouse the night before the start. We have raced against each other for years and he has often beaten us hollow, so I am  delighted to be just ahead of a fabulous sailor”.

A clutch of well sailed Class40 will be taking part in the Myth of Malham, including Harvard Mabire Campagne de France racing with Miranda Merron and Ronan de Kersauzon.

In the Class40 Division, Peter Harding’s Phor-ty sailed by Pip Hare, scored an emphatic win by nearly 15 hours. However there was a titanic battle for second between Campagne de France, designed and skippered by Halvard Mabire, and the latest Owen Clarke designed Class40, Henrik Bergesen’s Hydra, sailed by Tristan Kinloch. Hydra took second by just over five minutes after over two days and nights of attrition.

In IRC Two, Fournier & Migraine’s J/133 Pintia enjoyed another close battle with Nick & Suzi Jones’ First 44.7 Lisa, sailed by RORC Commodore Michael Boyd. Pintia won the class with Lisa second and Patrick Ponchelet’s X-40 Exception was third. Pintia may have won this battle but Lisa is still winning the war, as leading boat for IRC Two for the season.