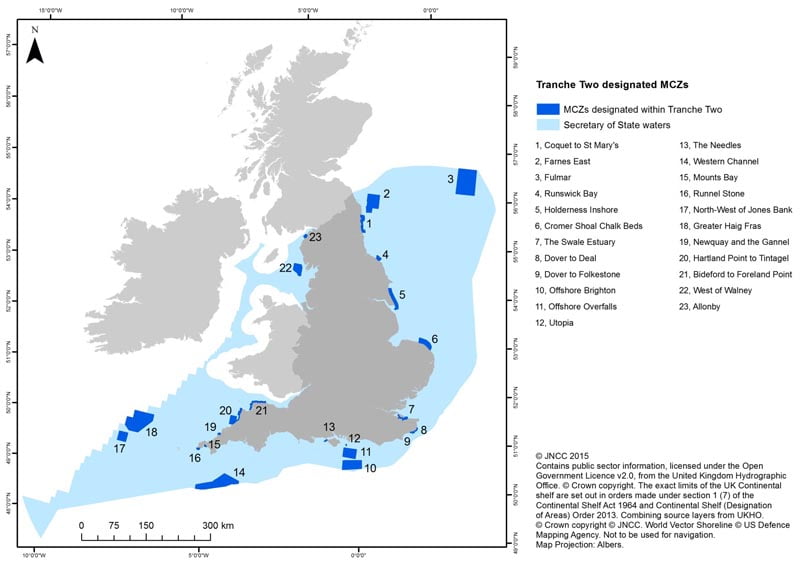 Following public consultation the Government has announced the designation of the second tranche of Marine Conservation Zones and has confirmed plans for the third tranche of sites.

The outcome of the consultation, which took place in early 2015 and gathered over 9,000 responses, has seen 23 sites in English waters designated as Marine Conservation Zones (MCZs). All of the sites within the consultation were considered suitable for designation.

The new sites protect 4,155 square miles of our most stunning and rich marine habitats and bring the total number of MCZs in waters around England to 50, covering 7,886 square miles – an area roughly equivalent to the whole of Wales, or 13 times the size of Greater London.

The Royal Yachting Association (RYA) supports the UK and Devolved Governments’ shared vision for clean, healthy, safe, productive and biologically diverse oceans and seas and believes that, in most cases, this vision can be achieved without any adverse impact on either the public right or the safety of navigation for recreational boating.

In response to the public consultation, the RYA stressed the need for objective and robust evidence to support the designation of MCZs and maintained that the public right of navigation (which includes anchoring) should be respected and upheld, and the safety of navigation should not be adversely impacted.

The RYA considered the proportionality, enforceability and effectiveness of each site and asserted that relevant economic and social consequences should be taken into account when designating any site.  The RYA examined the proposed management scenarios for each site and pressed for all options for voluntary initiatives such as those actively promoted by The Green Blue (the RYA’s joint environment programme with British Marine) to be exhausted prior to consideration of any statutory management measures.

Where are the approved sites?

The 23 sites designated in the second tranche cover areas across the country from as far north as Farnes East off the coast of Northumberland down to Land’s End in the South West, and will protect 45 different types of habitat, geological features, and fascinating species – including stalked jellyfish and spiny lobsters.

The Marine Management Organisation (MMO) will review recreational activities within each designated site, using advice from Natural England along with stakeholder input, to consider what management may be necessary to achieve the objectives of the site.  Designation does not necessarily mean that recreational activities will be restricted and decisions will be made on a case-by-case basis.

The Government has stated that management will not be put in place where activities do not have a detrimental impact on the conservation aims of the MCZ.  The RYA supports this approach and has been meeting regularly with the MMO and Natural England, working closely with them to influence this process is it develops.

The RYA submitted detailed information on recreational boating and anchoring at the Needles site, indicating that overlap of the seagrass with the main anchoring and mooring activity in the area is minimal.  As a result, the Government has confirmed that any management required in this site may also be minimal, is unlikely to significantly affect use of the area, and can potentially be done on a voluntary basis.

For the Swale Estuary, as a result of concerns raised by the RYA and other users of the site, the Government confirmed that their assessment that no management of the anchoring, at its current level of intensity, would be required.

Government has also confirmed that harbour activities within the sites in the south west are not considered to be incompatible with the MCZs. For the sites around Dover, the RYA supported the pre-consultation changes to the site boundaries to move them away from the port and these have been maintained.  The Coquet to St. Mary’s site boundary has also now been amended to exclude the Port of Blyth’s statutory limits.

As the process of developing management at these sites progresses, the RYA will continue to oppose any measures that it considers to be disproportionate, unenforceable or ineffective.

Welcoming the designation of the new sites, Marine Environment Minister George Eustice said: “As an island nation, the UK is surrounded by some of the richest and most diverse sea life in the world – from the bright pink sea-fan coral colonies off the south-west coast, to the great chalk reef stretches in the east. It’s vital that we protect our marine environment to ensure our seas remain healthy, our fishing industry remains prosperous, and future generations can enjoy our beautiful beaches, coastline and waters.

“By designating these new Marine Conservation Zones and creating a Blue Belt of protected areas around the country, we can better protect our environment through careful marine management in years to come.”

Emma Barton, RYA Planning and Environmental Manager, added: “We are pleased that the Government has recognised the importance of recreational boating within a number of these new Marine Conservation Zones, and the knock-on effect that designation could have on businesses that rely on these activities.  We will continue to support the designation process whilst striving to minimise the potential impact of MCZs on the navigational rights and safety of recreational boaters as plans for management of these sites are developed.”

Consultations on Special Areas of Conservation for harbour porpoise and Special Protection Areas for birds are expected later this month.

A consultation on the third tranche of proposed MCZ sites will follow in 2017, for designation in 2018.  The Government will select sites for consultation from the remainder of the 127 sites previously put forward that have not already been designated or removed from consideration.  However, those sites in offshore waters adjacent to Wales are no longer under consideration as these will be devolved to the Welsh Government.

The Government is also considering a small number of new sites, in addition to the 127 sites previously put forward, which may now be considered for designation.  The Government plans to hold discussions with stakeholders on the potential sites until autumn 2016.  The RYA will continue to meet with the Marine Environment Minister and Government officials to ensure that the needs of recreational boaters are reflected and that robust evidence is collected prior to determining which of the remaining sites to consult on.

The RYA will be working closely with its regional network of volunteers to ensure that the interests of its affiliated clubs and members are reflected in its response to any future public consultations. RYA Northern Ireland, RYA Scotland and RYA Cymru Wales are also engaging with the ongoing marine protected area (MPA) process in their respective countries, with support from the RYA nationally.