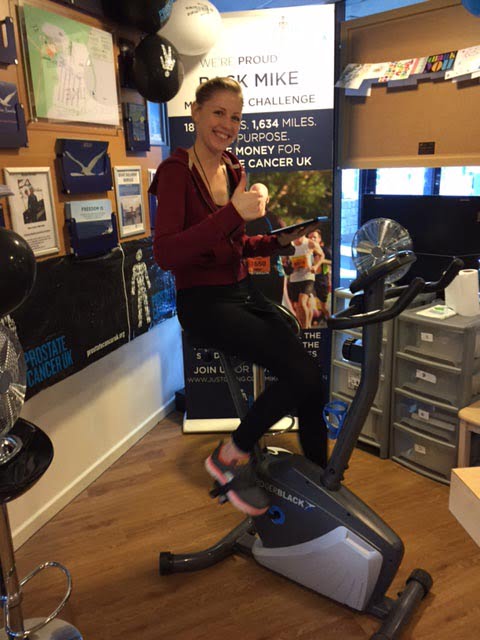 Staff and customers from all of MDL’s marinas in the UK recently undertook an epic charity cycle challenge in aid of Prostate Cancer UK, crossing the finish line with a fantastic 2,441 miles cycled and helping to raise £4,796 along the way.

MDL Marinas, Europe’s leading marina operator, created the initiative in support of Mike Glanville, Group Head of Operations at MDL who sadly lost one of his best friends to prostate cancer and decided to take on the challenge of completing three runs for the charity, culminating in finishing the Virgin London Marathon at the end of April in 4 hours, 7 minutes and 56 seconds.

To support Mike, the MDL team decided that whilst he put on his running shoes and pounded the pavement they would all help him with his fundraising by cycling the route of its UK marina network and back again – a whopping 1,634 miles, with a target of raising £1,634 – which the team went on to smash.

To conquer the challenge, MDL’s static bike made a grand tour of its 18 UK marinas including Woolverstone Marina in Ipswich, Queen Anne’s Battery in Plymouth, Ocean Village Marina in Southampton and the head office in Hamble. Each marina was challenged to rack up the most miles for charity and there were some fantastic achievements at many of the sites. It was a close call but Torquay Marina cycled in to first place reaching 821 miles on the bike and through donated miles, raising a fantastic £555.

Mike Smith, Marina Manager at Torquay Marina, commented: “It was a great challenge that we were all really keen to get involved in to help support Mike and raise funds for Prostate Cancer UK. We were very pleased to see so many of our team, berth holders and tenants getting involved and for achieving the accolade of winning marina.”

Mike Glanville, Group Head of Operations at MDL Marinas, commented: “I have been overwhelmed by the fantastic fundraising support I’ve had and would really like to thank everyone who cycled or donated to help put an end to Prostate Cancer. Cycling the initial target of 1,634 miles was a big ask and it’s brilliant that we ended up cycling to our Spanish marina, Sant Carles and back again instead! I am very proud of what a great team effort this has been and that we’ve helped to raise close to £5,000 for the charity that is very close to my heart.”