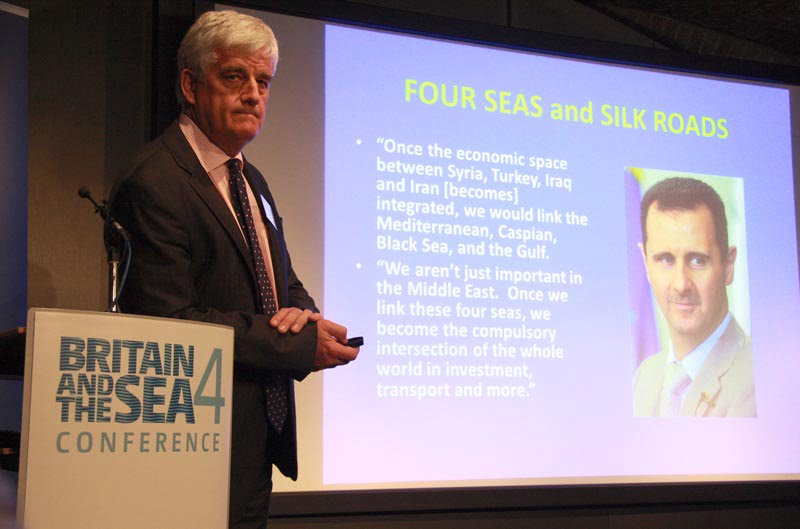 Land grab at sea – the aggressive territorial expansion of nations like Russia and China into the ocean – presents one of the greatest threats to world trade and peace in the 21st century, an audience has heard at the Britain and the Sea conference.

The conference, organised by the Maritime Foundation in cooperation with Plymouth University, was held as part of London International Shipping Week 2015.

A stark warning issued by Rear Admiral Chris Parry heard that the freedom of the sea risks being snatched from Britain by more aggressive and enterprising countries.

He said if disputes are not resolved peacefully, future naval conflicts are further likely to revolve around and result in land grab at sea.

“The question for the developed world is whether they wish China, Russia and other powers to seize the initiative at sea and to dominate the oceans in the era of globalisation,” said Mr Parry. “The Chinese investment in ports across the India Ocean and in Europe is looking like the “treaty port” system in reverse.

“The great issue to resolve in the 21st century is whether the idea of freedom of the seas is to persist or if creeping territoriality whereby states exercise sovereign jurisdiction over their adjacent seas space,” said Mr Parry.

“The next ten years is likely to be characterized by a largely contained international system at sea, in which states will largely cooperate, but will compete continuously for strategic and regional advantage both within, and around, the edges of international maritime law.

“States will compete in order to secure and exploit the resources of their economic zones, to maximise the opportunities provided by the sea to promote trade, conduct warfare and provide security for their societies and, in conjunction with commercial concerns, to secure the resources of the wider global commons for their exclusive benefit.”

Rear Admiral Parry, author of Superhighway – Sea Power in the 21st Century, said: “In a developed world in which sea, commercial and national power will be diffused, the advantage is likely to lie with those countries which have powerful navies, that are able to enforce claims and can deploy sufficient commercial power to exploit the carrying trade, the ocean routes and the exploitation of the resources at sea.

“In a complex competitive environment, modern maritime forces will be needed to ensure national security and the rights of access and trade at sea, especially to natural resources and energy products, in the face of increasingly assertive, adventurous and aggressive states.”

Rear Admiral Parry said in some cases, these circumstances will lead to the threat and use of force in support of national interests through the employment of both manned and, increasingly unplanned platforms.

Maritime Foundation chairman Julian Parker OBE said the event, held at the Royal Society of Arts, was designed to stimulate debate on maritime risks in an era of uncertainty, and critically its effect on world trade.

“The event marked the fourth instalment of the Britain and the Sea conference series,” said Mr Parker. “The health and vitality of Britain’s maritime sector is of immense importance not only in terms of international trade, but also to the nation’s security and economic wellbeing.

“The conference provided a platform for leading maritime experts and senior members of the Royal Navy to explore and debate the balance between commercial opportunity, security and defence in a globalised trading economy.

“Critically, it helped to uncover the vulnerabilities of international trade, and encourage efforts for a national response. Promoting Britain’s across the maritime sector is a key role for the Maritime Foundation, and we feel very passionately about ensuring maritime remains an essential component of national policy.

Vice Admiral Fleet and Commander and Deputy Chief of Naval Staff Sir Philip Jones KCB also spoke about the strategic role of the Royal Navy in safeguarding global trade and defence of the United Kingdom.

He said the Royal Navy is working with partners in the UK academia and industry, to push the boundaries of existing technology, including the development of the world’s first 3D printed drone in a maritime environment.

“The ability to produce and operate cheap, recoverable, or even disposable drones at sea could vastly extend the eyes and ears of the captain of a merchant vessel for instance, as a navigational tool and for safety at sea.

“If this insight was shared and disseminated amongst lawful users of the sea it could also increase our collective situational awareness within the maritime community.

“However, we will only be able to maintain our technological edge if we have the necessary expertise, which is why the Royal Navy is working with government, the educational sector and industrial partners to develop the training and skills that both the Royal Navy, and UK need for the future.

“The relationship between the Navy and maritime sector has never been closer, nor more important, than in this age of global opportunity. As economic recovery continues, we want to continue working together because with a strong and credible Royal Navy comes global influence, greater security and the stability on which military and trading alliances are built.”