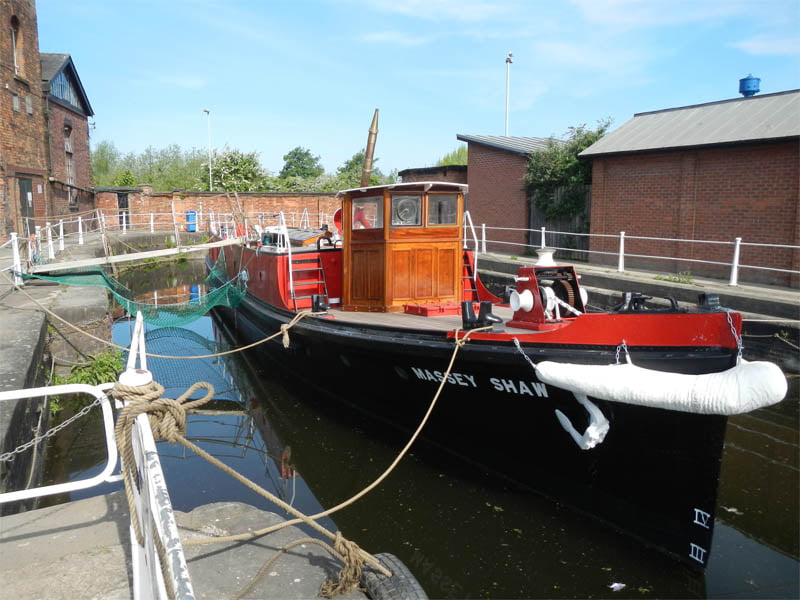 At 0730 on Thursday 21st May 2015, the former London fireboat and Dunkirk Little Ship, ‘Massey Shaw’ joins over 60 fellow Dunkirk Little Ships as they leave Ramsgate for Dunkirk to commemorate the 75th Anniversary of Operation Dynamo.

The 8-10 hour journey will honour the memory of the bravery of the volunteer crew who made the perilous journey to fight fires off the French Coast. The Massey Shaw was the only fireboat to attend and made three separate trips across the Channel to Dunkirk over a period of several days. During this time she ferried over 500 troops from the beaches to the safety of larger troop ships anchored in the Channel.

Although the vessel has a plaque that displays the 18 crew members, links with the majority of the men’s descendants have been lost. The boat’s owners, the Massey Shaw Education Trust, now wish to use this commemoration to find their descendants and honour their involvement.

David Rogers Honorary Company Secretary and Director of the Trust has been closely involved in the recently completed six year restoration and is leading on the plans for the 75th Anniversary voyage and is appealing for information on the crew. ‘Coincidentally 2015 marks the 80th anniversary of Massey’s build in 1935 so the trip will be a double celebration. We would love to hear from anyone who knows of any descendants of the 18 crew who bravely journeyed to save others. There is a plaque on the vessel with the names and we are asking people to circulate this on social media to try and reach some more of the family members.’

David continued, ‘Getting the 80 year old Massey Shaw to a stage where she can make the journey to Dunkirk has been a long and complex process. We have had the support of many fire brigades along the way, hundreds of individuals and many sponsors not least of which has been the Heritage Lottery Fund.

Well-wishers will have plenty of opportunity to be part of this historic passage. Massey leaves her London base of West India Docks on 18th May and travels to Ramsgate to join the Dynamo Day celebrations of the Association of Dunkirk Little Ships (ADLS). A Military Parade and Fly Past by the Red Arrows is planned, together with Church Services for the crews. Subject to weather the ADLS vessels leave early on Thursday 21st May and will be accompanied on the journey across the Channel to Dunkirk by a small flotilla of VIP boats.

Massey and her crew will be a guest of honour of the Dunkirk Fire Brigade in a ‘twinning’ that started fifty years ago in 1965. Massey has returned to Dunkirk previously, in 1985, 1990 and 2000, each time as an honoured guest of the French fire service.

Massey Shaw Reception, Thursday 30th April
In the run-up to the return to Dunkirk a Reception will be held at Westminster Boating Base, to formally mark the return of Massey Shaw to her permanent London home in the West India Docks. Scheduled for Thursday 30th April, the event is a gathering of invited VIPs, representatives of Heritage Lottery Fund, trustees, volunteers and fund-raisers and will celebrate the many years of hard work.

Until her retirement in 1971 Massey Shaw served the Thames as part of the London Fire Service. During World War 2 she was called upon to protect and save buildings and property during the Blitz. She also made three separate trips to Dunkirk and is credited as having saved over 500 soldiers.

Her recent restoration has been largely funded by the Heritage Lottery Fund but the project has also had invaluable support from sponsors, enthusiasts and present and former members of fire brigades around the country.