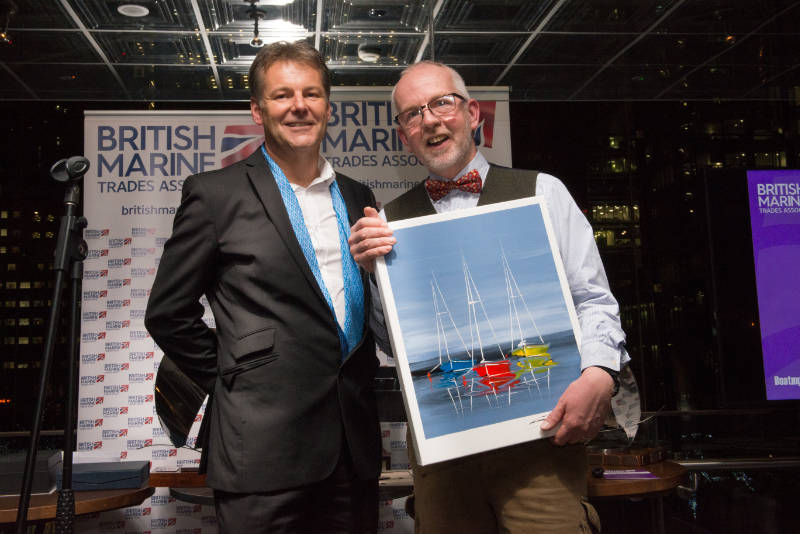 The 2018 British Marine Trades Association Awards dinner last night (Wednesday 10 January) crowned a highly successful first day at the London Boat Show 2018 for many and provided a welcome opportunity to focus on the achievements of leading personalities and companies in the industry.

The highlight of the evening was the host of awards up for grabs. British Marine group associations, British Marine Trades Association and British Marine Leisure Boating had a combined five awards on offer, with industry publication, Boating Business, issuing another five on the night.

The awards winners were:

Speaking immediately after the event, British Marine Trades Association Chairman, Paul Martin, stated: “This was another highly successful dinner that was completely sold out and very well supported.

“It was great to recognise E P Barrus as our Business of the Year – both in light of the company’s noteworthy 100th anniversary and its excellent level of service to retail and trade. Our Marine Personality of the Year, Sam Taylor-Nobbs of ICOM UK, was a very popular choice among a field of strong nominations. I was also personally pleased to name the Chairman’s Special Award recipient as Neil Chapman of Boatshed.com for his individuality and character – a long-standing personality in the industry who always makes you smile when you meet up with him.”

Rob Clark, Chairman of British Marine Leisure Boating, commented on Hamble Point Yacht Charter’s Customer Service Award: “As an industry sector we have many outstanding examples of customer care demonstrated as standard practice by our members. Over the last few years this has been further highlighted by companies who have been highly recommended or awarded the British Marine Leisure Boating Customer Service Award.

“This has been no different in 2018 and this year’s winners, Hamble Point Yacht Charters, have based their success on looking after their customers first and foremost and ensuring that every person who comes into contact with them is greeted by a friendly, knowledgeable response.”

Paul Martin concluded on the evening: “It is a privilege, as Chairman of British Marine Trades Association, to host this event and we’re already planning for the next one in 2019.”